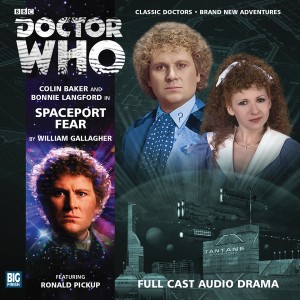 It’s another rollicking adventure for the Sixth Doctor and Mel!

‘Spaceport Fear’ is a Big Finish audio adventure of ‘Doctor Who’, starring Colin Baker as the Doctor and Bonnie Langford as Mel. It’s nice Colin and Bonnie get to do more ‘Doctor Who’ stories together compared to the TV series. This time, the Sixth Doctor and Mel visit a spaceport of a devolved society.

This four-part story is by William Gallagher. William has contributed to Big Finish before when he wrote the Fifth Doctor and Nyssa story ‘Doing Time’ in ‘The Demons of Red Lodge and Other Stories’. He has also written for old Sixy before in ‘Wirrn Isle’. It was nice to hear another story by William again.

The TARDIS lands on Tantane Spaceport where a terrible war is going on. The war is between two tribes called Business and Economy. The Doctor and Mel discover that once landed on Tantane Spaceport, there is no escape. They have to be pretty careful as the monstrous Wailer is lurking about.

I must admit it. I heard this once and I found I couldn’t get into it. Even on a second listen, I wasn’t wholly impressed by the story. Don’t get me wrong, it’s not terrible. William Gallagher writes something intriguing. But I felt so uninspired and I didn’t get the full enjoyment that this story needed.

The story is set on a spaceport in the far future. Sometimes with futuristic stories I find them hard to visualise especially if you’re going in the same corridor all the time. I felt this was the case with this story and whilst there were good moments of humour and character, this didn’t fulfil my expectations.

Having said that however, William Gallagher presents an interesting ‘human’ run-down society in his story. The people are led by a ‘false’ leader and are afraid of something prowling the dark corridors. Mel with the Seventh Doctor would visit a similar run-down society that featured in ‘Paradise Towers’.

The war between Business and Economy is interesting, although you do have to pay attention to understand how this society works and why they fight in the power struggle on the spaceport. There are also these interesting uses of video games featured in this tale that play a part in this unusual war.

The Spaceport Announcer that could also be a tannoy is annoying at first and keeps saying “Welcome to Tantane Spaceport” as well as give announcements. This gets on the Doctor and Mel’s nerves and it is also disturbing, especially when it announces ‘one new arrival’ and that there are ‘no departures’. 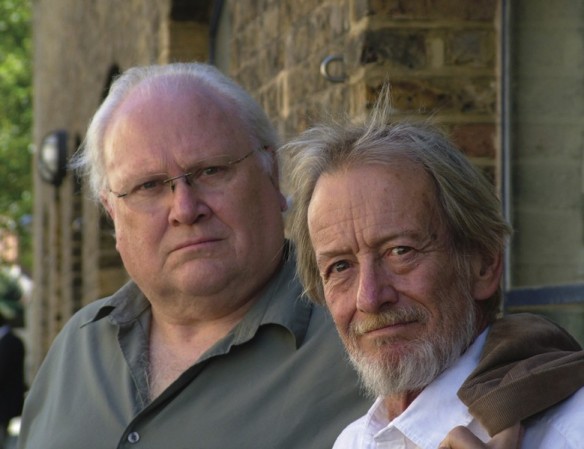 Colin Baker is great as the Doctor in this audio adventure. Despite being mellowed when he travels with Mel these days, he can still be the fiery; brash Doctor in his manner when he wants. But he’s not so bad as he was at the beginning and it goes to show how much Big Finish have treated Colin’s Doctor.

I liked it when Colin’s Doctor is working things out regarding the ‘fear’ the spaceport has and he unravels more about what is going on and tries to understand this ‘human’ society. He gets to show his compassion when he realises who the villain is and tries to save the people on board the spaceport.

Bonnie Langford is equally good as Mel. I enjoyed the banter the Sixth Doctor and Mel share together when they’re in the TARDIS as well as exploring and having an adventure on board the spaceport. Mel too gets to show her compassionate side. She is especially shocked when someone kills people coldly.

There are moments when Mel can be funny and girly at times during the story. One moment I liked with Mel is when she doesn’t like cobwebs and she brushes them away whilst on the spaceport. She also gets to be good with handling the computer games on the spaceport due to her skills and memory.

The biggest guest star in this story is Ronald Pickup as Elder Bones. Ronald, for me, did the voice of Aslan in the BBC productions of ‘The Chronicles of Narnia’ and was also in ‘Danny the Champion of the World’. He also appeared in the ‘Doctor Who’ TV story, ‘The Reign of Terror’ with William Hartnell.

Elder Bones is the leader on board Tantane Spaceport. He takes care and charge of the Economy tribe. He also works double-time as the Director for the Business tribe at the same time. Elder Bones turns out to be the villain as he’s lived for 500 years and kills people cold-bloodedly when they’re in the way.

The monster of the story is the Wailer. This is a spacefaring creature that soon turns out to be a baby and it kills people in fear whenever they feel threatened. Thus it kills Pretty’s mother Beauty regardless. It’s all Elder Bones’ fault and it pretty gets tense when more Wailers come to the spaceport.

So while ‘Spaceport Fear’ is not one of my favourite Big Finish audios of ‘Doctor Who’ with Colin Baker and Bonnie Langford, it’s an interesting story by William Gallagher. I should give this story another chance, but I felt uninspired by the end of it since I felt this was a traditional average space adventure.

Aside from that, there are some great performances by Colin Baker; Bonnie Langford and Ronald Pickup playing their characters. If you’re a Sixth Doctor and Mel fan, you’re bound to enjoy this one. And there are other Sixth Doctor audio adventures to enjoy by Big Finish, so I am not too disappointed.

The CD extras are as follows. At the end of Disc 1, there is a suite of incidental music to enjoy. At the end of Disc 2, there are behind-the-scenes interviews with the cast and crew including Colin Baker; Ronald Pickup; Beth Chalmers; writer William Gallagher; director Barnaby Edwards; etc.

There is a trailer for the next story with the Doctor and Mel called ‘The Seeds of War’.