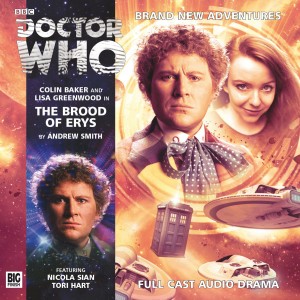 Erys with the Sixth Doctor and Flip

I trust Andrew Smith to provide us another thumping good ‘Doctor Who’ audio drama! 🙂

I enjoyed ‘The Brood of Erys’ very much! After listening to a number of Sixth Doctor/Flip audios by Big Finish in early 2020, I continued to listen to more audios in the same year. For me, there’s a lot to catch up on with the Sixth Doctor audio adventures by Big Finish. It’s always nice to look forward to.

I purchased this audio adventure as a download via the Big Finish website. I listened to it on one my tablets whilst sitting up in bed in my bedroom. 😀 ‘The Brood of Erys’ is a four-part adventure by Andrew Smith, who has contributed a lot to ‘Doctor Who’ via Big Finish compared to the TV series. 🙂

Andrew is well-known for writing the Fourth Doctor TV story ‘Full Circle’ from Season 18. But it’s clear he has such a fertile imagination for this show and he can write for any Doctor. I always enjoy getting a chance to hear one of Andrew’s stories whether it’d be in ‘Doctor Who’ or in ‘Star Cops’. 😀

Colin Baker and Lisa Greenwood in ‘The Brood of Erys’.

For ‘The Brood of Erys’, this was the second story to be featured in the 2014 trilogy of Sixth Doctor audios with Colin Baker as old Sixy and Lisa Greenwood as Flip. I wondered how their adventures would continue after hearing their previous one ‘Antidote to Oblivion’ as well as the other stories. 🙂

The story takes place in the area of the planet Asphya and its unremarkable moon Erys. Space travellers are warned not to go there. Very soon, the TARDIS materialises there. The Doctor and Flip become in great peril when the ship gets raided by the imp-like Drachee who want it for themselves.

Flip is soon carried away and the Doctor has to find a way to rescue her. The Doctor soon encounters a woman who crashed her space yacht and can’t remember who she is. As the Doctor and Flip attempt to reunite with each other, the secrets of Erys are about to be unveiled. There is no escape!

The concept of a living moon featured in this story is not an unoriginal one I don’t think, but somehow its feel welcome in this story. I like how the moon happens to be the parent of the imp-like Drachee and Erys gets furious with them when they become disobedient during this audio story.

The Drachee also seem to have powers given to them by Erys in order to probe people’s minds and weaken them to their will to get what they want by planting life-like fears before them. Thankfully, the Doctor overcomes the Drachee’s hold on him due to being a Time Lord and they’re so surprised.

I was able to follow each scene in the story without much problem. There weren’t any confusing moments to be found when hearing this story as there’s a lot of character-driven drama, atmosphere and tension, which is what I’d like to find in a fast-paced and well-written audio story. 🙂

Lisa Greenwood, director Nicholas Briggs and Colin Baker in ‘The Brood of Erys’.

Colin Baker is excellent as ever playing the Sixth Doctor in this ‘Doctor Who’ audio story. I like how Andrew writes for him and it’s clear that Colin’s Doctor has mellowed by the time he’s travelling with Flip. I like how Colin interacts with people like Sarra whom he bonds with whilst he solves a mystery.

It’s intriguing how he confronts Erys and tries to find ways to tame him and not destroy him as I guess would be the expected human reaction. The Doctor is good at unravelling the mystery, especially once he discovers the people of Asphya can’t leave their home with being created by Erys.

Lisa Greenwood as Flip Jackson is equally good in this audio adventure. It can be argued that Flip gets separated from the Doctor again like she did in ‘The Fourth Wall’. But Andrew is very good at writing her character and she does come across as rather resourceful instead of being sidelined here.

I like how Flip copes when she’s inside the moon, talking to the Drachee; then to Erys itself and then she gets to run away. She soon ends up in a Drachee ship which she tries to pilot herself before she’s drifted into space; then she gets rescued and she soon plummets back down to Erys in the TARDIS. 🙂

The story’s guest cast is as follows. There’s Nicola Sian as Sarra Vanser, the woman who has lost her memory in order to keep something secret from Erys when on a mission. Nicola also played Ellie Oswald, Clara’s mum in ‘The Rings of Akhaten’. It was a nice surprise to find her in this audio story. 🙂

Sarra is a kind-hearted person when the Doctor meets her, even though she has amnesia. I like how it gets revealed that Sarra is a mother and she’s on the search for her two daughters and her husband when they missing in the Erys sector. I like how strong she becomes by the story’s climax. 🙂

Tori Hart and Brian Shelley in ‘The Brood of Erys’.

There’s Tori Hart as Lona, who is a new born Drachee within the Erys moon. Lona gets introduced in the second episode when Flip stumble upon her. Instead of being friendly with her, Lona tries to stop Flip escaping. She soon meets up with Terrill, the Drachee leader and is soon given food by him.

It becomes surprising when Lona questions Terrill’s motives as a leader and it gets revealed that she has the mind of Erys inside her mind. So, at the end of ‘Part Three’ and early on in ‘Part Four’, Tori Hart plays Erys for a bit when speaking through Lona. I didn’t see that coming whilst hearing the tale.

Chris Overton appears in this story as Terrill, the Drachee leader as well as Levek, Sarra’s husband at the end of the story. Terrill is clearly ambitious and wants to have the TARDIS, getting annoyed when people like the Doctor, Lona and Erys interfere. Soon, Terrill becomes the Doctor’s ally by the end. 😐

There’s Brian Shelley as Renval, one of the dwellers on the planet Asphya, and Erys, the living moon itself. I like Brian’s performances as Renval and Erys. With Renval, you have sympathy for him when he can’t get off Asphya once entering the TARDIS. Erys seems malicious and evil for most of the tale.

Glynn Sweet guest stars as Elgin Vanser, Sarra’s father in the story. At first, you may think Elgin is a bad guy as he planted Sarra with a memory suppressor to prevent her remembering why she came to Erys in the first place. But he’s clearly a good guy later, especially once he rescues Flip in the story.

I like how the story concludes with the Sixth Doctor, Flip and others managing to tame Erys and give him a few tips about parenting the Drachee. It did put me in mind of how Tom Baker’s Doctor tamed Xoanon in ‘The Face of Evil’, especially a scene where old Sixy and Flip meet up with Erys at the end.

I enjoyed it when Erys made references to Susan, Jo, Sarah Jane, Leela, Romana, Nyssa and Peri when talking about the Doctor’s companions in that scene. Erys reminds the Doctor what happened when he shut Susan out of the TARDIS to spend her life with David in ‘The Dalek Invasion of Earth’. 🙂

In the end, all is well, and hopefully Erys won’t cause any more problems with the Drachee or anyone else from now on. It seems that the Doctor and Flip are on their way to search for Peri in the next story. What will happen next here? I hope nothing bad will happen to either of them next time.

‘The Brood of Erys’ has been a thrilling, gripping audio adventure featuring Colin Baker’s Sixth Doctor and Lisa Greenwood’s Flip Jackson. I enjoyed the atmosphere, tension and character drama featured throughout this story. It’s thanks to Andrew Smith for keeping me entertaining with his tale of his. 🙂