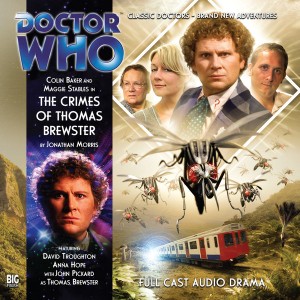 ‘THE CRIMES OF THOMAS BREWSTER’

John Pickard is back as Thomas Brewster in ‘Doctor Who’!

I did wonder what had become of Thomas Brewster since he left the TARDIS in ‘A Perfect World’. I wondered if he had a ‘happily ever after’ life with Connie in that episode. Would he get into trouble afterwards? Would his life never be plain-sailing as hoped? Well, I got my answer in this audio story.

For those unfamiliar with the Big Finish audios, Thomas Brewster was a short-time companion with the Fifth Doctor and Nyssa. He appeared in the audio adventures, ‘The Haunting of Thomas Brewster’, ‘The Boy That Time Forgot’ and ‘Time Reef’ as well as ‘A Perfect World’ that I mentioned.

Thomas also appeared in the Companion Chronicles story, ‘The Three Companions’, with Polly and the Brigadier. I wish that there were more adventures with the Fifth Doctor, Nyssa and Brewster, especially since there was potential in the character of Thomas Brewster from those Big Finish tales.

I know I’ve said that I would like to do my own Fifth Doctor, Nyssa and Billy story with Brewster called ‘The Prison of Thomas Brewster’. But that’s a story for another occasion. So, how does Big Finish continue Brewster’s story from where he’d left off in ‘A Perfect World’? How else? With Colin Baker! 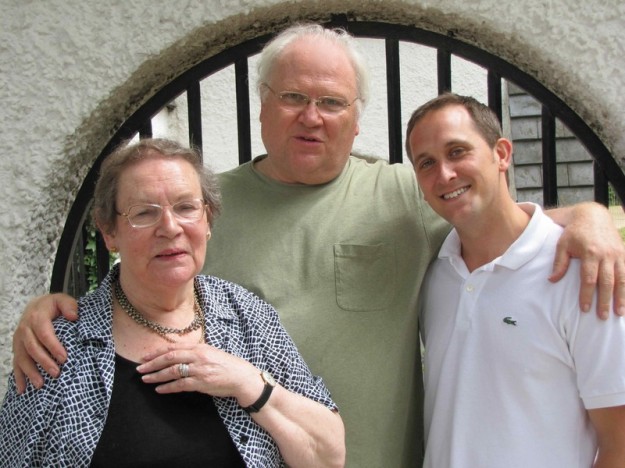 Maggie Stables, Colin Baker and John Pickard in ‘The Crimes of Thomas Brewster’.

This is ‘The Crimes of Thomas Brewster’, a four-part story by Jonathan Morris that begins a trilogy of stories with the Sixth Doctor and Evelyn Smythe reunited with Thomas Brewster. It took me a while to get around to listening to this follow up of Thomas Brewster, but this was well-worth it in the end.

Jonathan Morris is a fantastic ‘Doctor Who’ writer in Big Finish and I’ve met him at a convention. I knew this story was going to be exciting and pretty good when I listened to it on audio. And since Jonny Morris had created Thomas Brewster in the first place, it was fair that he’d write this first tale.

So what happens in this story? Well it begins with Colin Baker’s Doctor and Maggie Stables’ Evelyn being chased by some robot mosquitoes attacking them with laser beams. They’ve no idea why they’ve been attacked, as they were only intending to visit the Tower of London in the modern age.

The Doctor and Evelyn thankfully get rescued by DI Patricia Menzies and her police force. It seems that there’s a gangland kingpin in London who calls himself the Doctor. The Doctor helps Menzies to find out who this ‘Doctor’ person is. Of course, it turns out to be none other than Thomas Brewster.

It was great to hear John Pickard back as Thomas Brewster. It was interesting to hear what happened to Brewster since he left the TARDIS in ‘A Perfect World’. I wanted to know what went wrong with his ‘happily ever after’ and how he would react to Colin Baker’s Doctor and Evelyn here.

In this, Brewster is now hardened and not the charming person he seemed to be in the Fifth Doctor stories he was in. He lost Connie when she got run over by a car, which was pretty tragic to hear. Brewster attempted to use the old time machine he created in ‘The Haunting of Thomas Brewster’.

He wants to get back to Victorian London where he tried to use the time machine. Unfortunately, Thomas Brewster made contact with the alien planet Symbios and the insect-like Terravore invaded modern-day Earth. Will Brewster trust the Doctor enough when they try to rescue the planet Earth?

Colin Baker delivers a brilliant performance as the Doctor in this adventure. I like how the Doctor uncovers the mystery of what’s going on before he finds out that it’s Thomas Brewster behind this. Colin’s Doctor’s interaction with Brewster differs to how Peter Davison’s Doctor interacted with him.

Colin’s Doctor is reactionary and he takes no nonsense when in dealing with what Brewster’s done in his involvement with the Terravore. I found it interesting how the Doctor doesn’t reveal his identity to Brewster when he meets him in ‘Part Three’ before Brewster soon works it out during ‘Part Four’.

I’ve met Colin at plenty of ‘Doctor Who’ conventions and have enjoyed chatting with him during signing sessions. He clearly loves doing ‘Doctor Who’ for Big Finish audio and it’s amazing how stretched out his Doctor has become compared to the somewhat short time he had in the TV series.

Maggie Stables returns as Evelyn Smythe in this adventure. I enjoy her interaction with Colin’s Doctor in the Big Finish and its clear the two actors got on well with each other behind-the-scenes. I enjoyed how Evelyn meets Brewster for the first time and how she works out he’s not ‘the Doctor’.

I liked it when Evelyn meets up with Flip and Jared as they get taken away by Brewster from Earth to the planet Symbios via tube train. Unfortuantely, Evelyn gets possessed by the sentient Locus on the planet Symbios. It was eerie and disturbing to hear Evelyn as the Locus when she talks to the Doctor.

I recall asking Colin Baker how much he enjoyed working with Maggie Stables in the Big Finish audios of ‘Doctor Who’, to which he gave a positive answer. This was when I attended the ‘Regenerations 2016’ convention in Swansea, September 2016 and after Maggie Stables sadly passed away in 2014. 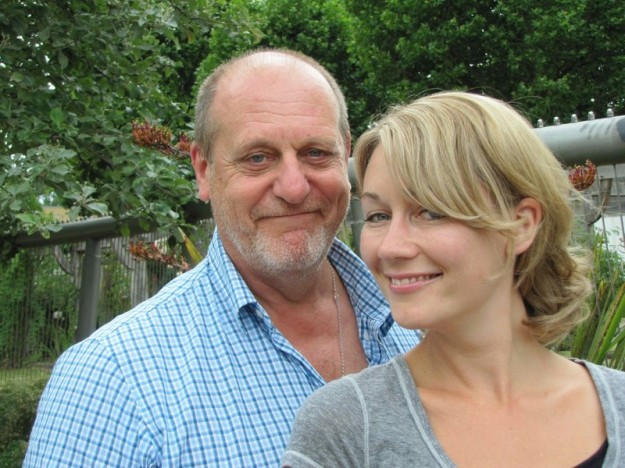 David Troughton and Anna Hope in ‘The Crimes of Thomas Brewster’.

This story also features Anna Hope as DI Patricia Menzies. It seems that Menzies knows the Doctor already, whereas for him he hasn’t met her yet. Menzies was in two other Sixth Doctor stories, ‘The Condemned’ and ‘The Raincloud Cloud’. They featured Charley Pollard in them after Evelyn had left.

This is another one of those River Song characters where the Doctor hasn’t met that particular person yet where he or she has already. Thankfully, it isn’t complicated as it sounds and Menzies doesn’t seem fazed by it. She’s willing not to reveal a lot to the Doctor and not disrupt the timeline.

I enjoyed how the Doctor and Menzies worked together in this story. The Doctor seems to trust Menzies and she does her best to make out she’s surprised by something new like the interior of the Doctor’s TARDIS. By the end, I was very surprised the Doctor worked out Menzies knew him already.

There’s also David Troughton as Raymond Gallagher, an East End crime boss. David Troughton has had many associations in ‘Doctor Who’ over the years. As well as appearing in the TV series including ‘The Enemy of the World’, ‘The War Games’, ‘The Curse of Peladon’ and ‘Midnight’, David has done many audio productions.

He’s starred in plenty of Big Finish audios as well as read many ‘Doctor Who’ audiobooks for the BBC. I’ve had the pleasure of meeting David at the ‘Dimensions 2013’ convention in Newcastle, October 2013. It’s always a pleasure to hear David Troughton in one of these Big Finish audio stories.

The character he plays in this is a nasty piece of work. Raymond Gallgaher wants to know who this gangland kingpin called ‘the Doctor’ is. He gets Evelyn to go and meet him and even threatens the ‘real’ Doctor on occasion. He soon becomes an ally with the insect-like Terravore in the adventure. 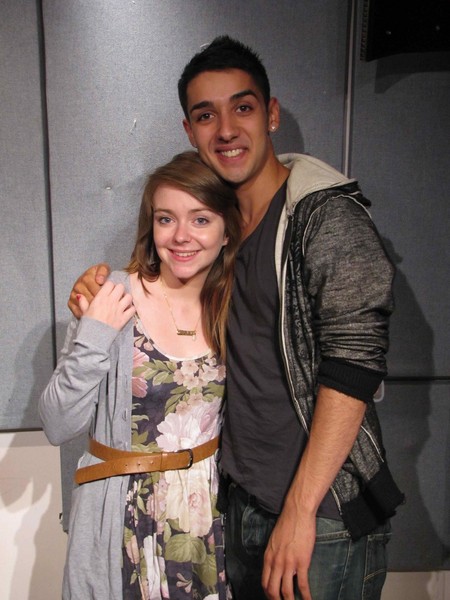 Lisa Greenwood and Ashley Kumar in ‘The Crimes of Thomas Brewster’.

There’s also Ashley Kumar as Jared Ramon, Flip’s boyfriend. Jared and Flip get caught up in this adventure when travelling on a tube train with Evelyn who’s being chased by Thomas Brewster. I liked the moment when Jared admits he’s scared to Flip and she seems okay when he’s admitting it

The story also features Duncan Wisbey, who’s done plenty of ‘Doctor Who’ audio dramas for Big Finish, as Sergeant Bradshaw. Bradshaw is like Menzies’ right-hand man during the story. It did seem that Bradshaw disappeared, presumed dead in the story. But thankfully he is still alive in ‘Part Four’.

The Terravore are voiced by Helen Goldwyn in this adventure. These ‘Doctor Who’ monsters are an interesting lot, as they’re essentially robotic insects with a determination to eliminate the Doctor. It’s interesting how the story uncovers what the Terravore’s connection to the planet Symbios is about.

The story ends on a shocking cliff-hanger. After defeating the Terravore, the Doctor and Evelyn return to the TARDIS to find Thomas Brewster who points a gun at them. Brewster forces the Doctor to take him back to Victorian London in the TARDIS. Couldn’t Brewster have asked nicely for this?!!!

The CD extras are as follows. At the end of Disc 1, there’s a suite of incidental music that I enjoyed. At the end of Disc 2, there are behind-the-scenes interviews with Colin Baker, Maggie Stables, John Pickard, David Troughton, Anna Hope, script-editor Alan Barnes, director Nicholas Briggs, etc. There’s a trailer for the next story with the Doctor, Evelyn and Brewster called ‘The Feast of Axos’.

2 thoughts on “‘The Crimes of Thomas Brewster’ (Audio)”