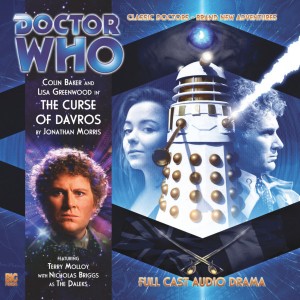 ‘THE CURSE OF DAVROS’

Davros, the Daleks and Waterloo with the Sixth Doctor and Flip

The Sixth Doctor has had a long life of adventures in Big Finish audio. He’s shared those adventures with many of his companions. As well as Peri and Mel, he’s had adventures with people like Evelyn and even Charley who was Paul McGann’s companion. Thus, it’s fair he should have another one. 😀

‘The Curse of Davros’ by Jonathan Morris features the return of Lisa Greenwood as Philippa ‘Flip’ Jackson. She was introduced in ‘The Crimes of Thomas Brewster’. I enjoyed that story and I enjoyed Flip. And here we are again with another cracking good romp by Jonny Morris that reintroduces Flip.

Flip is a London girl who met the Doctor with her boyfriend Jared during ‘The Crimes of Thomas Brewster’ involving the insect-like Terravore. Here she is again with Jared meeting the Doctor on another adventure, except it’s with Daleks; Davros and going back in time to the Battle of Waterloo.

It’s been a year since Flip last met the Doctor. She and Jared soon find him inside a flying saucer that came down from space. They both help the Doctor as he seems to be escaping from another alien menace that happens to be the Daleks. But things aren’t what they seem with the Doctor very lately.

Colin Baker and Lisa Greenwood in ‘The Curse of Davros’.

I always love listening to Jonny Morris’ ‘Doctor Who’ stories and this four-parter was a good one for me. For the most part, Jonny Morris is able to deliver thrilling, action-packed adventures with some pretty good character drama. You know you’re in for a good time when hearing a Jonny Morris story.

I definitely enjoyed the thrills; twists and turns featured throughout this story. It especially got exciting and tense when by the end of ‘Part Two’, it turned out the Doctor was actually Davros…and Davros was actually the Doctor. Yeah! Big shock! I didn’t expect to hear that twist when hearing this.

Essentially it’s mind-transfer technology that’s involved. The Doctor’s mind is inside Davros’ body whilst Davros’ mind is inside the Doctor’s body. It allows Colin Baker and Terry Molloy to play different characters compared to what they are usually used to playing with some intriguing results.

Sometimes it’s quite mind-boggling. When I listened to the story again, I had to keep in mind that it was Davros inside the Doctor’s body throughout ‘Parts One and Two’. It was so surreal to think of Colin Baker playing a villain this time whilst Terry Molloy was being a hero trapped inside the villain.

Lisa Greenwood, Colin Baker and Ashley Kumar in ‘The Curse of Davros’.

I enjoyed it when we shifted from London 2012 to Waterloo 1815 where the historical battle involving Napoleon Bonaparte and the Duke of Wellington took place. It felt like the first episode was a completely different story compared to the rest of it being set during the Battle of Waterloo. 🙂

Yeah, I know it’s not historically accurate event with the Daleks being involved and becoming Napoleon’s allies in the process. But when has ‘Doctor Who’ ever been historically accurate with some stories set in Earth’s past? Heck, I’ve done it myself in my stories, especially ‘The Austen Code’.

Colin Baker is a delight to listen to in these Big Finish audios of ‘Doctor Who’. I enjoyed how he does his take of Davros inside the Doctor’s body for most of the story. For a while, he has to pretend that he is the Doctor before Flip. Some of the things he does as Davros in the Doctor are shocking to hear.

This includes allowing a soldier to be killed; revealing his true identity to Flip as well as exposing the Doctor in Davros’ body; and ordering Daleks to self-destruct when they displease him. Thankfully, Colin Baker isn’t Davros for very long as he’s soon back as the Doctor for the rest of the tale in ‘Part Four’. 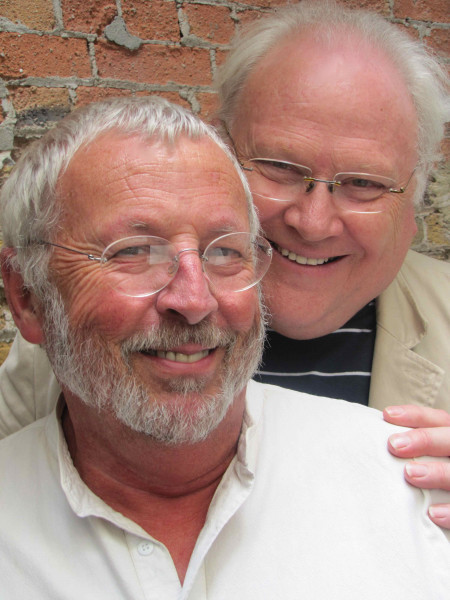 Terry Molly and Colin Baker in ‘The Curse of Davros’.

Sometimes, I wished Davros was a good person in the end with the Doctor’s mind inside his. It was tense when the Doctor in Davros apologised to Davros in the Doctor for switching their minds back again. But it was a relief when Davros’ mind was back in his body, even though he rants and raves. 😀

Lisa Greenwood is a highlight in her return as Flip in ‘Doctor Who’. Sometimes she can be quite cheeky and a little sharp at times, especially with her boyfriend. But she’s got a good heart and I like how she seems eager to help the Doctor with Davros’ mind and later Davros with the Doctor’s mind.

It’s interesting to find that Flip wants something exciting to happen in her life compared to the mundane lifestyle she has with her boyfriend Jared. This does sort-of echo Rose’s character from the new TV series, but I don’t mind that so much and Lisa Greenwood has her own spin of a companion.

The Daleks, once again, are voiced by Nicholas Briggs in this adventure. I believe these are the white Imperial Daleks from ‘Revelation’ and ‘Remembrance’ as opposed to the black ones we’re familiar with. Nick Briggs knows how to add new interesting layers to each Dalek character featured in a story.

In this story, the Daleks do get confused when it’s either Davros in the Doctor’s body or the Doctor in Davros’ body. It was also surreal to hear the Daleks interacting with French characters during the Waterloo battle, including Napoleon as well as soldiers with Dalek minds that chant “Exterminate!!!”

The story also features Ashley Kumar as Jared, Flip’s boyfriend. He was in ‘The Crimes of Thomas Brewster’ too, so it makes sense for him to come back here. I like how he gets involved in the adventure and isn’t sidelined. I’m surprised he didn’t end up as a ‘Doctor Who’ companion with Sixy.

There’s also Jonathan Owen as Napoleon Bonaparte. It was interesting to hear Napoleon as a character, not knowing much about him in terms of history. Napoleon seems determined to win the Battle of Waterloo and working with the Daleks gives him a chance to succeed and not fail in history.

Other cast members include Rhys Jennings as Captain Pascal; Granville Saxton as the Duke of Wellington; Robert Portal as Marshal Ney as well as Superintendent Finch and Christian Patterson as Captain Dickson as well as Corporal Bouvier. All of the cast are pretty good in this audio adventure. 🙂

The story ends with the Doctor, back in his own body, about to send Flip and Jared back to their own time and place in the capsule they came in to travel back into the past. Flip however gets out of the capsule, leaving Jared to go back to Earth 2012, as she joins the Doctor on adventures in the TARDIS. 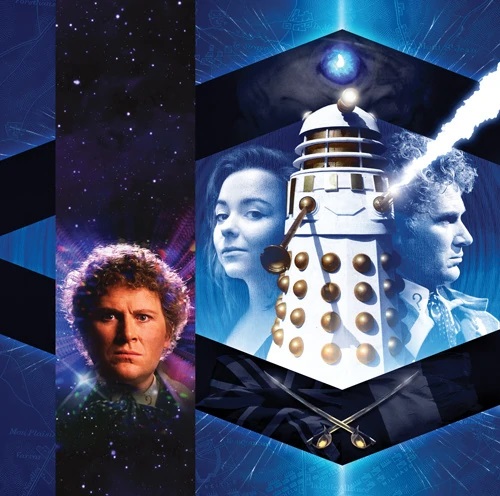 ‘The Curse of Davros’ has been an exciting, compelling ‘Doctor Who’ audio adventure to listen to with the Sixth Doctor reuniting with Flip as well as confronting Davros and the Daleks at the Battle of Waterloo. I’m looking forward to where Flip and the Doctor go next in adventures in time and space.

The CD extras are as follows. At the end of Disc 1, there’s a suite of incidental music to enjoy. At the end of Disc 2, there are behind-the-scenes interviews with the cast and crew including Colin Baker, Lisa Greenwood, writer Jonathan Morris, etc. There’s also a trailer for the next story with the Sixth Doctor and Flip called ‘The Fourth Wall’.