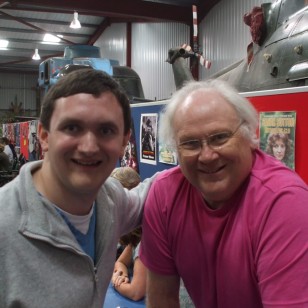 By far, this is my favourite ‘Doctor Who’ story with Colin Baker as the Sixth Doctor!

‘The Two Doctors’ is an enchanting and sometimes quite gruesome adventure, but it’s delicious all the same. Not only was this the first time I saw Colin Baker’s Doctor in 2007, but it also paired him up with another popular Doctor from the 1960s black and white days – Patrick Troughton as the Second Doctor.

This is a 3 x 45-minute episode story, which is the equivalent of a 6 x 25-minute episode story if this was shown on TV. ‘The Two Doctors’ is by Robert Holmes, one of the most popular ‘Doctor Who’ writers of the classic series, being the script editor to Tom Baker’s Fourth Doctor during the mid-1970s.

I’ve had the DVD cover of ‘The Two Doctors’ signed by Colin Baker and Frazer Hines at the ‘Stars of Time’ event in Weston-super-Mare in July 2012. I’ve also had it signed by Nicola Bryant at the ‘London Film and Comic Con’ in the Olympia, London, July 2018 and by Jacqueline Pearce as the ‘Regenerations 2016’ in Swansea, September 2016. I’m pleased these four stars signed my DVD cover.

The Second Doctor and Jamie meet a middle-aged scientist called Dastari who’s been involved in some dangerous time-travel experiments that have been monitored by the Time Lords. Again, I would question how Jamie knows of the Time Lords when he is not supposed to, but that is for another time.

Anyway, the Second Doctor has been sent by the Time Lord to see that these experiments are stopped. Very soon, the space station is overrun and gets attacked by Sontarans. They kidnap the Doctor and take him to Seville in Spain on Earth, leaving Jamie alone and gradually wretched on the space station.

Once there, the Sixth Doctor and Peri discover that a battle has occurred. They eventually find Jamie there. Finding out what happened from Jamie, the three travel to Seville to rescue the Second Doctor and defeat the Sontarans with their allies the Androgums in their dangerous time-travel experiments.

‘The Two Doctors’ was directed by Peter Moffat, who previously directed stories like ‘State of Decay’, ‘The Visitation’, ‘Mawdryn Undead’, ‘The Five Doctors’ and ‘The Twin Dilemma’ before this. I like Peter Moffat’s direction for this story, especially the sunny exotic filming for Seville in Spain which is superb.

I love how the Spanish setting for this story is portrayed and how the production team made the effort in setting a story abroad. It took producer John Nathan-Turner’s determination to see it done. Peter Howell’s incidental music also adds to the Spanish setting as well as the direction and location filming.

I really like Colin Baker as the Sixth Doctor in this story. As this was the first time I saw Colin as the Doctor, I found his interpretation of the character interesting. He presents a brash and temperamental version of the Doctor, who can be pretty rude and dismissive of everyone else around him sometimes.

I wasn’t aware of that time that Colin Baker’s Sixth Doctor turned out to be unlikeable for TV audiences in the mid-1980s. Gradually he mellowed as the series went on and he’s had a big resurgence in the Big Finish audios. I was able to notice moments of compassion in the Sixth Doctor even in the TV series.

I’ve met Colin Baker a number of conventions over the years. I’ve enjoyed meeting him; chatting and sharing how much I like his Doctor both in the TV series and the Big Finish audios. He appreciates my support and is quite a character when I meet him at conventions. I especially enjoy his wry humour. 😀

I also really like Nicola Bryant who is lovely as Peri, an American companion to the Sixth Doctor. Peri gets to show her worth as a companion since she gets to solve the mystery with the Doctor about whether ‘somebody’s setting the Time Lords up’. The Doctor’s impressed she had made the deduction.

Peri also gets to be friends with Jamie and she bravely causes a distraction for the Sixth Doctor and Jamie to get inside the house where the enemy is to rescue the Second Doctor. She gets chased by a hungry Shockeye a lot. Peri is one of the sexiest companions, due to her revealing outfits in the series.

Patrick Troughton as the Second Doctor is, as always, funny and energetic as ever. Patrick gets strapped down to a chair for most of the tale when he is about to be experimented on. But he manages to stand up in defiance against Dastari, the Androgums and the Sontarans when he warns the dangers.

I found the scenes where Patrick’s Doctor gets turned into an Androgum very funny. Patrick relished playing a hungry Doctor when he and Shockeye go out on the town to get some food and have a meal at one of the Seville restuarants. I did wonder if Patrick would be an Androgum for the rest of the tale.

I wish that there was more scenes of interaction between the Second Doctor and the Sixth Doctor in this story. They only meet in a few scenes during ‘Part Three’ of the story. Most of the dialogue between them is brief, but I liked how they banter and bicker with each other sometimes for this story.

Frazer Hines is very good as Jamie in this adventure too. Frazer missed being away from ‘Doctor Who’ for so long that he jumped at the chance of being reunited with Patrick Troughton again and to work with a new Doctor in Colin Baker as well as with Nicola Bryant as Peri. It clearly shows in this TV story.

I also enjoyed those scenes where Jamie teams up with the Sixth Doctor and Peri to rescue the Second Doctor. Jamie gets to stab a Sontaran in the leg with his dagger in this. I’ve met Frazer Hines at a number of conventions over the years and I have enjoyed meeting and chatting to him at those events.

The story’s main villainess is Jacqueline Pearce as Chessene, who is an Androgum. A member of Franzine Grig apparently. Cheesene is an augmented Androgum created by Dastari, with her cannibalistic instincts removed. But that does not stop her in wanting to achieve time-travel capability.

Chessene allies herself with the Sontarans along with Shockeye and Dastari to help her. She’s a villain with a cold calculating manner. She seems intelligent, but the Second Doctor warns Dastari he can’t change nature. She’ll remain an Androgum. This is demonstrated in her desire for blood in ‘Part Three’.

This story was also the first time I saw the Sontarans. I really got into these war-like potato-headed monsters and I enjoyed their military bombastic manner and philosophy. It was a matter of time before I saw more Sontaran tales in ‘The Time Warrior’ and ‘The Sontaran Stratagem’/’The Poison Sky’.

There are two Sontarans that appear in ‘The Two Doctors’. They are Clinton Greyn as Group Marshall Stike and Tim Ranyham as Major Varl. Stike is taller than Varl, which is interesting. It’s a shame we didn’t get to see more of them in action especially as they struggled filming in Seville’s sunny weather.

Looking back, I don’t suppose ‘The Two Doctors’ is the best story to feature the Sontarans since we only see two of them and we only see an invasion fleet from a distance in space on a space station. But this story was a great introduction for me to the Sontarans as I found them both funny and scary here.

This story also features the new monsters called the Androgums. As well as Chessene, there’s of course John Stratton as Shockeye of the Quawncing Grig. I love Shockeye in this! He’s outrageously funny and always wants to eat people. He doesn’t get his chance when he is constantly interrupted by Cheesene.

My best friend Stephen and I watched this story on DVD one time and loved the scenes where Shockeye kept chasing Peri. It was funny when Shockeye desperately tried to get hold of Peri when she visited the Seville house. He then chases and was about to get hold of Peri at the end of ‘Part Two’.

The Androgums depicted in this story are Robert Holmes’ attempt to convey his vegetarian views since they are cannibals. I found this interesting to discover as I re-watched the story, especially in its DVD special features. Nicola Bryant is a vegetarian as well, thus the writer and actress share common views.

The story also features Laurence Payne as Dastari. Laurence Payne has appeared twice in ‘Doctor Who’ in the stories ‘The Gunfighters’ and ‘The Leisure Hive’. Dastari is responsible for Chessene’s augmentation. But he soon finds himself working for Chessene in her evil plans. Could he have made terrible mistake?

There’s also James Saxon as Oscar and Carmen Gómez as Anita. Both help the Sixth Doctor, Peri and Jamie when they’re trying to get into the Seville house to rescue the Second Doctor from the Sontarans and the Androgums. Could one of these two kind people suffer a fatal blow at the hands of the enemy?

The DVD special features are as follows. On Disc 1, there are some audio options including a commentary with Colin Baker; Nicola Bryant; Frazer Hines; Jacqueline Pearce and director Peter Moffat. There’s also an isolated score option by Peter Howell to enjoy. There’s an info-text commentary option to enjoy as well as an ‘Easter Egg’ on the first disc to look out for on the main menu.

When I purchased ‘The Two Doctors’ DVD back in 2007, it had the ‘Jim’ll Fit It’ sketch called ‘A Fix with Sontarans’, starring Colin Baker, Janet Fielding and Gareth Jenkins. This special feature has been removed from the latest DVD releases due to the Jimmy Saville scandal that had occurred during 2012. This is a shame as I like that little sketch with little Gareth Jenkins meeting his hero, Colin Baker as the Sixth Doctor. They with Janet Fielding as Tegan battle against the Sontarans in the TARDIS. If only they could edit out the Jimmy Saville bits at the beginning and end of that sketch. I would prefer that really.

On Disc 2, there’s a very enjoyable documentary about Robert Homes and his involvement with the ‘Doctor Who’ TV series called ‘Behind the Sofa: Robert Holmes and ‘Doctor Who’. This has interviews with the script editors Terrance Dicks and Eric Saward and producers Barry Letts and Phillip Hinchcliffe. There are also two behind-the-scenes programmes that focus on the actual recordings of ‘The Two Doctors’. The first programme is ‘Beneath the Lights’, and this features recording sessions on the space station. The second programme is ‘Beneath the Sun’  and this features location filming in Spain. There’s a documentary called ‘Adventure In Time and Spain’ with production manager Gary Downie providing his insight on the making of ‘The Two Doctors’. There’s a BBC Radio 4 documentary about the making of ‘The Two Doctors’ called ‘Wavelength’, featuring cast and crew interviews. There’s a photo gallery of the story and there is a music video celebrating the 40th anniversary of ‘Doctor Who’.

So to wrap up, ‘The Two Doctors’ is a very good and very entertaining ‘Doctor Who’ story from the Colin Baker era. It was my first encounter with Colin’s Doctor and it has become a very memorable adventure. It may be violent in places, but it has lots of humour and is deliciously juicy! Yum, yum! 😀