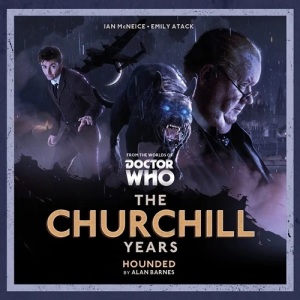 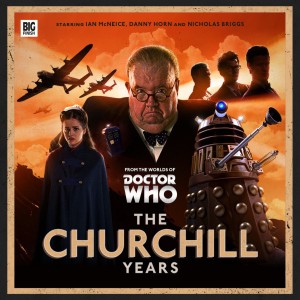 The Black Dog with Winston Churchill, the Tenth Doctor and Hetty

‘Hounded’ is an episode by Alan Barnes. It was fascinating to hear a story where the Tenth Doctor meets Winston Churchill here. I do believe this is the Tenth Doctor after his adventures with Donna.

Alan Barnes has tried to write a ‘Doctor Who’ story with Churchill before. Originally, he planned to feature Churchill in ‘Castle of Fear’ with the Fifth Doctor and Nyssa as well as a Home Guard platoon.

Sadly that didn’t happen due to Churchill making an appearance in ‘Victory of the Daleks’ for Series 5 of the new TV series. In the end, the Home Guard idea was in ‘Heroes of Sontar’ with the Sontarans.

Thankfully, Alan Barnes got his chance to do a Churchill story for ‘The Churchill Years’ Volume 1 box set. ‘Hounded’ is an episode that explores Churchill’s bad moods that manifest into a hungry hound.

The story takes place in the dark days of 1941. Winston is now the Prime Minister of Great Britain and he gets plagued by his own psyche. His bad moods have him soon stalked by a terrifying animal.

Hetty Warner soon meets up with the Tenth Doctor, who looks different from the last time they met. As the Tenth Doctor tries to help out, he soon gets arrested and declared a traitor to Britain. 😐

Will the Doctor and Hetty be able to help out with Winston’s ‘black dog’ menace or can a visiting Swami answer his troubles. For one thing’s for sure, a number of people will die from this venture. 😦

Ian McNeice continues to deliver a great performance as Churchill in this audio episode. I like how Ian puts across Churchill’s impatience, especially once things go against him, causing his dark moods.

It’s easy to think of Churchill as a noble hero of the war effort during World War II. From watching the ‘Darkest Hour’ film, the black moods Churchill had during war-time are very evident in this story.

Once again, I don’t believe Ian McNeice delivers a convincing Tenth Doctor impersonation in this audio adventure. But then again, this is Churchill narrating the tale, so maybe it’s not really required.

It was great to hear Emily Atack back as Hetty Warner in this audio episode. I like Hetty’s reaction to the Tenth Doctor. She slowly realises that despite looking different, it is the same man that she met.

Hetty still has the attributes of a companion figure, even though she works under Churchill. It’s also nice to how Hetty stands up to Winston. Much has changed since they met in ‘The Oncoming Storm’.

It was a shock when the episode had Hetty self-sacrifice herself and be killed by the terrible ‘black dog’. I was hoping that Hetty might’ve lasted for some more episodes with Winston Churchill here. 😦

The story also features Jo Stone-Fewings as Major Wheatley. Wheatley does come across as a nasty piece of work, especially once he has the Doctor arrested and locked up. He happens to be a coward.

Amerjit Deu guest stars as the Swami, whose real name happens to be Kahn Tareen, from India. Interesting how the Swami manages to summon up the black dog from Churchill’s psyche in the tale.

The story also features Stewart Scudamore as Danvers, a member of Churchill’s household at Chartwell. He only appears at the story’s start when Churchill runs in being chased by the black dog.

I’m not sure how the black dog came into being and whether it was an alien apparition or some mystical thing created by the Swami. I did like ‘The Hound of the Baskervilles’ reference in the story.

It did get tense when the Tenth Doctor tried to lie to Churchill about him losing the war and trying to put a contraption on his head. Soon, our Churchill puts the contraption on the Doctor’s head instead.

Famous words do get said by Churchill, including ‘blood, sweat and toil’ as well as ‘never, never, never…’ I was expecting the famous Churchill speech “We shall fight on the beaches” somewhere. 😀

I was disappointed with how the story abruptly ended. The Tenth Doctor doesn’t even get to say goodbye to Churchill and wish him well. He just goes off in his TARDIS as Churchill finishes the end. 😦 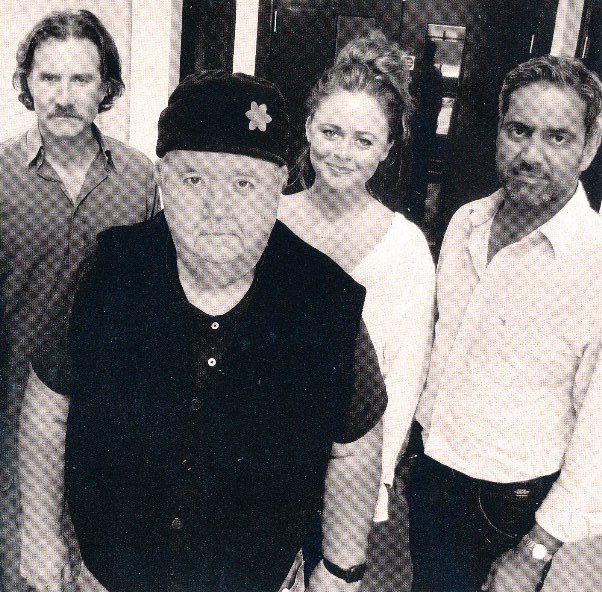 ‘Hounded’ has been an enjoyable episode in the first ‘Churchill Years’ box set. I wouldn’t say it was a great instalment, but it was intriguing how it explored Churchill’s psyche and dark moods in the war.