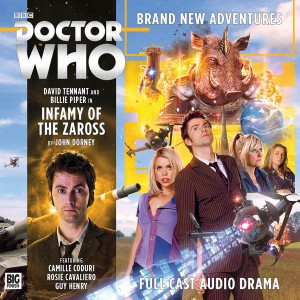 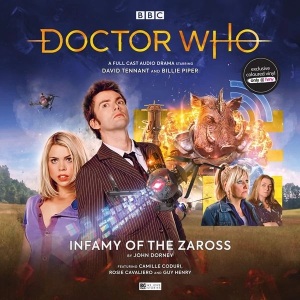 The Zaross with the Doctor, Rose and Jackie

After enjoying ‘The Tenth Doctor Adventures – Volume 1’ with the Doctor and Donna, I wondered when Big Finish would make another set of audio adventures with my favourite new series Doctor. While I was away for the ‘Swing That Music’ midweek break in May 2017, there came the exciting news!

David Tennant and Billie Piper were to reunite as the Tenth Doctor and Rose for three more exciting ‘Doctor Who’ adventures by Big Finish. I was thrilled and gobsmacked. I couldn’t contain my excitement. I even purchased ‘The Tenth Doctor Adventures – Volume 2’ during the midweek break!

I watched Series 2 of ‘Doctor Who’ when the TV stories were being released on DVD in 2006. I was relatively a newcomer to ‘Doctor Who’ by that point and David Tennant and Billie Piper were extra special for me. They gave me fond memories of why I enjoyed the ‘Doctor Who’ series very much.

This is a 5-disc CD box set. The three episodes are on the first three discs and they are ‘Infamy of the Zaross’, ‘The Sword of the Chevalier’ and ‘Cold Vengeance’. There’s also ‘The Tenth Doctor Adventures Documentary’ on Disc 4 and ‘The Audio Adventures of Doctor Who’ documentary on Disc 5.

The first episode of this box set, ‘Infamy of the Zaross’, is by John Dorney. I love this episode from the box set. John Dorney delivers another spellbinding episode and writes for the Doctor and Rose!

The story takes place in Norwich, England. It’s sometime during Series 2 of ‘Doctor Who’ on Earth, as Jackie Tyler is visiting one of her old friends, Marge Ellmore. Very soon, an alien invasion takes place.

I like that scene where Jackie phones up Rose on her mobile to ask her and the Doctor to come and help with this alien invasion. Seconds later, the Doctor and Rose have already turned up to help out.

That is a wonderful scene to introduce the Doctor and Rose in the Big Finish audios and is well-written by John Dorney. I even replayed the scene again to make sure that I wasn’t hearing things in the tale.

The concepts in this episode are very well-done and easy to engage with. I like how John Dorney takes on the initial premise that it’s a typical alien invasion till it turns out to be something different.

The warthog-like Zaross seem to be the bad guys at first. But it all turns out to be the making of a TV show by another alien race. This reflects with modern day society and suits the Russell T. Davies era.

I was thrilled to hear David Tennant again as the Doctor. As ever, he keeps the fiery spirit going with his humour, sense of adventure and defying evil forces. His relationship with Rose is still very sparky.

I liked those scenes where the Doctor discovers what the Zaross are and what they’re doing in taking part in this TV show by aliens. When he finds the humans were really killed, he does let out his fury.

I was even more thrilled to hear Billie Piper back as Rose Tyler in this story. I didn’t know what to expect when I heard Billie on audio and it did feel like Rose had never been away from the TV series.

I liked Rose’s resourcefulness in the adventure, especially when she coped on her own and saved the Doctor using the sound speakers. She also joins the Doctor in defying against the real true enemies.

Camille Coduri guest stars as Jackie Tyler in this audio adventure. I was pleased to hear Jackie in this adventure. It felt right for her to appear in a Tenth Doctor and Rose adventure for this audio box set.

Jackie does get to take part in the adventure, as she even gets to go up into space and see the Earth below aboard an alien spaceship. She gets to understand why Rose loves travelling with the Doctor.

Marge seems to be more snooty a mum than Jackie is. She’s shocked when the Doctor and Rose turn up and that the TARDIS is inside her house. She also does not seem to treat her daughter Jess well.

Ikron is a callous person who’s only interested in making his TV series a profitable success. Despite the Doctor and Rose telling him that he’s committing murder, Ikron seems to dismiss them instantly.

The cast also includes Beth Lilly as Jess Ellmore, Marge’s daughter. Jess is an interesting character as she seems to be a mirror reflection of Rose, since she wants to have her fame during this story. There’s also George Watkins as Tanan the script-writer.

The monsters are the warthog-like Zaross (its leader voiced by George Asprey) of course. But is that their real species? It turns out they’re not what they seem. They wear make-up and seem to be dim-witted when starring in the TV series. 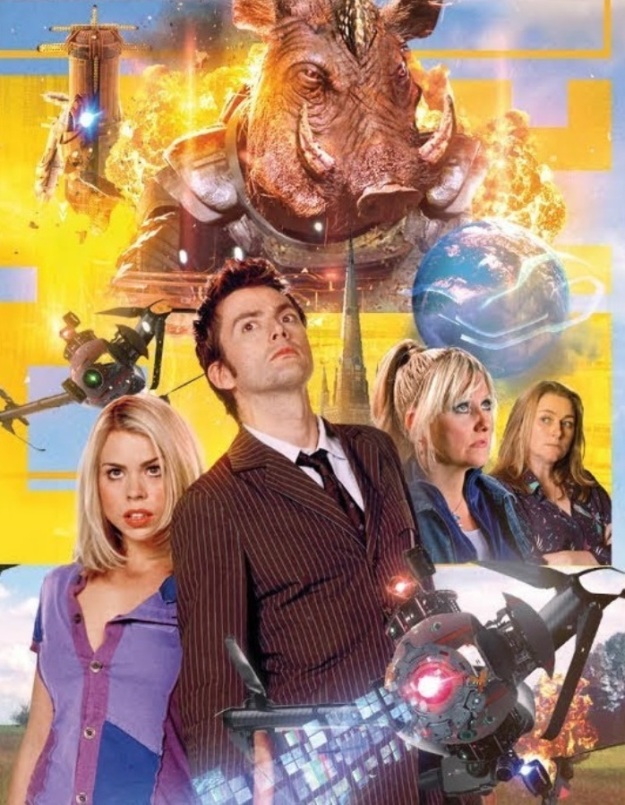 ‘Infamy of the Zaross’ is one of the best Tenth Doctor audio adventures I’ve ever listened to. Honest! I want to listen to this again, as it is well-written by John Dorney and I love the Doctor and Rose in it.

At the end of Disc 1 of ‘The Tenth Doctor Adventures – Volume 2’, there’s a track of incidental music from ‘Infamy of the Zaross’ to enjoy!