‘Kerblam!’ is a fantastic ‘Doctor Who’ episode! I loved every minute of it! It has to be my favourite episode out of Series 11 so far! It is my type of ‘Doctor Who’ story and I’m pleased that I watched it!

I loved the character development; the storytelling and the twists and turns featured throughout. I came away feeling happy from watching this! I even clapped my hands in applause from watching it!

This episode is by Pete McTighe, who makes his first contribution to the TV series. It’s a very clever episode with a unique idea of a futuristic retailer servicer like Amazon. I could easily identify with it! 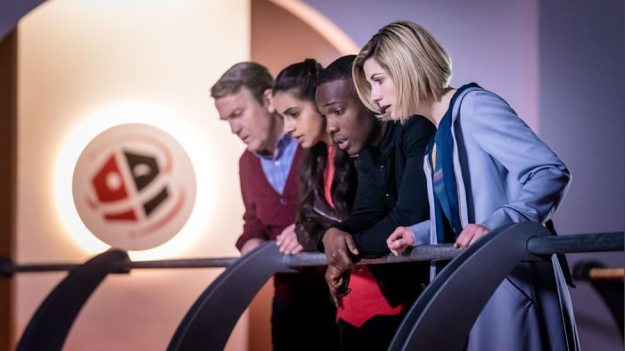 Oh by the way, I get everything I want from Amazon and I still will after watching the episode. Despite the good messages the episode conveys, I consider Amazon to be a very reliable retail service.

There was a special preview for this episode on Children In Need night as well as the lovely special piece featuring 9-year-old Anna Mark which I also saw that Friday. I’m pleased I saw both that night!

As you saw in the YouTube clip, ‘Kerblam!’ begins with the Doctor, Graham, Ryan and Yaz in the TARDIS. They are suddenly visited by this robotic postman whom the Doctor calls ‘the Kerblam man’!

Wait! I’m a little concerned about how the Kerblam man managed to get inside the TARDIS through the ship’s defences. Shouldn’t the Doctor be worried here? It materialised inside without a warning.

Ah well, it’s nothing to worry about as the Kerblam man delivers a package to the Doctor before it leaves. The Doctor, pleased with her purchase, opens the package as the item happens to be…a fez! 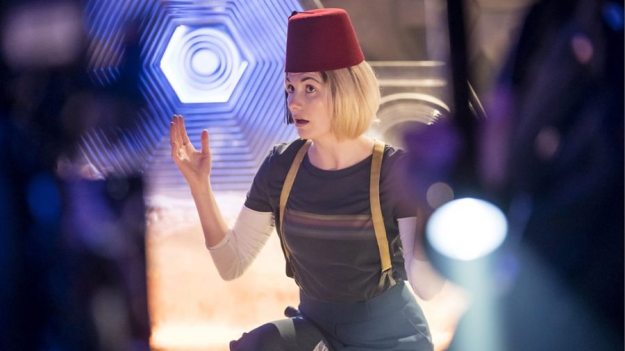 Ah, so fezs are still ‘cool’ by the time we get to the Jodie Whittaker era! Goodness, it took a while for the Kerblam delivery service to deliver! Perhaps Kerblam doesn’t have a ‘prime’ system like Amazon.

Matt Smith’s Doctor must have been impatient when he ordered the fez. 😀 I did think the fez looked good on Jodie Whittaker’s head. Maybe she should have kept that on throughout the entire episode.

Jodie Whittaker would make a good Tommy Cooper, wouldn’t she? 😀 Anyway, the TARDIS team also find some bubble wrap inside as well as a message on the packaging slip. This seems pretty unusual.

The packaging slip has the words ‘HELP ME’ on the back. This concerns the Doctor and her friends as they soon go off to the Kerblam retailer on Kandoka’s moon to find out what this message is about.

Once they’ve arrived on Kandoka’s moon, the Doctor takes on Ryan’s ‘brilliant’ suggestion of going undercover. The Doctor and friends pass themselves off as new workers to uncover what’s going on.

Julie Hesmondhalgh played Hayley Cropper in ‘Coronation Street’. I didn’t realise that it was her when I checked her up on Wikipedia. She looks very different compared to when she was in ‘Corrie’.

There’s also Lee Mack as Dan Cooper, one of the human workers at the Kerblam facility. I have seen Lee Mack in a few episodes of the BBC sitcom series, ‘Not Going Out’, before seeing this TV episode.

I enjoyed Lee Mack in that sitcom series as well as this ‘Doctor Who’ episode. I liked his character of Dan Cooper, who is a father that works at Kerblam. I was saddened by what happened to him in this. 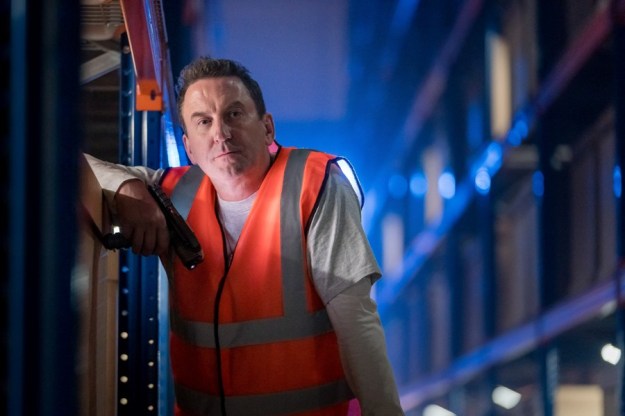 There’s Callum Dixon as Jarva Slade, who is a stern business executive at the Kerblam facility. I enjoyed Slade’s character in the episode and was initially convinced at first that he was the bad guy.

But as the episode progressed, it turned out not to be the case. I was surprised to find out who the villain was in the episode. It was someone that I did not expect at all and it was great surprise twist.

The episode also features Claudia Jessie as Kira Arlo and Leo Flanagan as Charlie Duffy who are workers at the Kerblam facility. I liked these two characters. They come across as nice young people.

It’s clear when Kira and Charlie first meet up that they’re romantically attracted to each other. It was a huge shock when I found out what happened to the two since Kira tragically gets killed in the story.

The Kerblam men, who are robots, are voiced by Matthew Gravelle. I did find the Kerblam men robots to be quite scary, especially with their smiley faces and electronic blue-glowing eyes at times.

The robots put my Dad and me in mind of those Postman Pat robots that we saw in ‘Postman Pat: The Movie’ from 2014. I wonder if that’s where they got their inspiration from in this TV episode. 😀 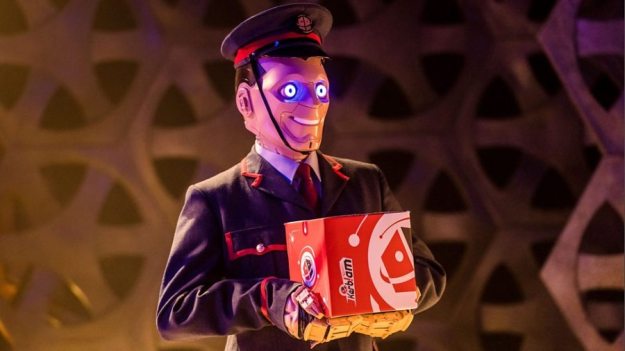 Jodie Whittaker excels as the Doctor in this episode. I honestly feel that her performance as the Doctor has got better and better throughout this season. She’s become one of my favourite Doctors.

The episode’s script works well to Jodie’s strengths as an actress as well as her Doctor’s character. Jodie’s Doctor is determined to solve the mystery of who sent the message to her in her fez package.

I liked the combination of humour and drama in Jodie’s Doctor for this episode. She seems good in connecting to people, especially when she and Ryan chat to Kira in the ‘dispatch’ section of Kerblam.

The Doctor is also pretty serious when she’s threatening Judy Maddox and Jarva Slade not to stand in her way and not to lie to her. I found those scenes pretty compelling when watching the episode.

It was suggested to me by Timelord007 that Jodie’s Doctor was a bit like Columbo. I hadn’t considered that, but it makes sense. She’s an observer than an intruder in investigating mysteries.

Bradley Walsh is brilliant as Graham in this episode. Sadly he gets the job of janitor in the episode when the Kerblam man give him a mop and a bucket of water. I couldn’t help laugh at that moment.

Graham’s reaction to it was also funny as he told the Doctor and Ryan “Not a word!” But this doesn’t stop Graham in finding out what’s goes on in Kerblam at his end, especially with Charlie helping him.

I enjoyed the scenes that Graham has with Charlie, who’s also a janitor, when they talk about the workplace and how he connects to him on a friend-to-friend level. This especially concerns Kira here.

Graham, as a janitor, has free access to what goes on in the Kerblam facility and is able to relay to the Doctor what’s really going on inside the place. I did like it when Graham found a map of Kerblam. 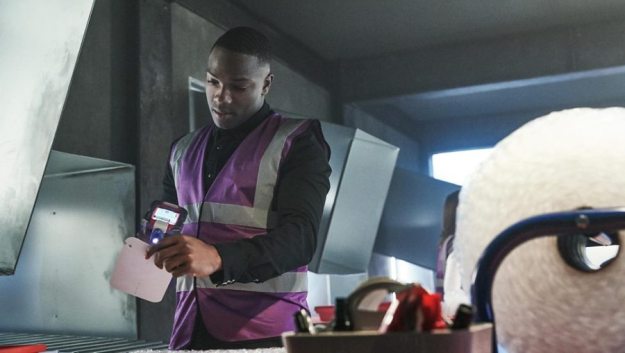 Tosin Cole is equally good as Ryan in the episode. Ryan is able to use his past experience of working at a warehouse when he’s working in the dispatch department at Kerblam, which was nice to watch.

Ryan does come across as rather confident in this episode. It demonstrates how travelling in the TARDIS has broadened Ryan’s mind to things that he never discovered before till he met the Doctor.

The issue of Ryan’s dyspraxia does get addressed in this tale. This is when he; Yaz and Charlie have to go onto a conveyor belt chute and when he and Yaz join Charlie from one conveyor belt to another.

But Ryan overcomes his hesitation and his lack of confidence in that area and survives well in the story. I did find the scenes when Ryan, Yaz and Charlie are on the conveyor belts pretty tense to see.

Mandip Gill is very good as Yaz in the episode. I enjoyed the scenes she shares with Dan when they’re collecting stuff from the Kerblam warehouse shelves. They were pretty nice scenes to watch.

Yaz gets to learn from Dan on how he misses his daughter and she shares her family background too to him. She almost has a run-in with some Kerblam men in the tale just when Dan has gone missing.

Thankfully Yaz manages to escape and rejoin the Doctor and friends in order to share her experiences of what happened with the Kerblam men. This is when everybody is outside the facility.

Yaz also gets to use her police officer skills in this episode, especially when she get to pin down the actual villain of the tale even for a few brief moments. Yaz and Ryan also become superb detectives.

I did enjoy some of the continuity references featured in this episode. This includes the ‘robophobia’ mention from ‘The Robots of Death’ as well as the Doctor announcing she had robotic friends once.

They don’t get mentioned, but I can guess two of the Doctor’s robotic friends were K-9 and Kamelion from the TV series. I wish they did get a mention. That would’ve been great to hear for the fan in me.

The Doctor makes mention of the fact that she met Agatha Christie once in an encounter with wasps from ‘The Unicorn and the Wasp’. Did she really have to make a mention of that episode in this?! 😀

Also, the Doctor once again uses Venusian Aikido in the episode as she did in ‘The Ghost Monument’. Still not enough custard creams though! I wonder why not. They’re Jodie’s favourite! 😀

This episode was funny, exciting and had a lot of tense moments that had me on the edge of my seat when I saw it. I was so amazed by the many twists and turns featured throughout this TV adventure!

You think for one moment that it’s all going to end ‘happily ever after’; then the next, “Wow, I didn’t see that one coming!” Some of it is tragic in the end, but the episode’s resolution was very satisfying.

The villain’s plan was interesting in that it reflects the 10% human workers working at the Kerblam facility not being treated well. Packages sent by Kerblam men were going to be sent to the customers. 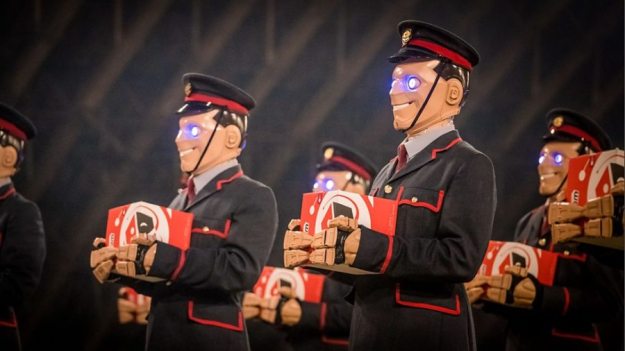 Except these packages contain explosive bubble wrap inside with the intention to ruin the Kerblam retailer’s reputation. That in itself is pretty horrible to imagine but is a very cunning scheme indeed.

I could be pedantic and say that Ryan popping the bubble wrap in the episode’s first scene set in the TARDIS didn’t set off an explosion like it should’ve done. I’m surprised Pete McTighe didn’t realise it.

But honestly, the Kerblam system that sent the message to the Doctor with the fez in a package could’ve known of the villain’s plan already. Thus, they could’ve sent harmless bubble wrap instead.

I like how the episode ends with the TARDIS foursome gathered together in the console room. Yaz ask the Doctor if they can go and see Dan’s daughter at her home in order to tell her about her dad.

It was a pretty touching scene and it goes to show how truly caring and compassionate the Doctor and her three friends can be. It’s something refreshing and it is a far cry from the Steven Moffat era.

‘Kerblam!’ is definitely one of the highlights for me from Series 11 of ‘Doctor Who’. I loved every minute of this fantastic episode and it definitely works so well for the Jodie Whittaker TARDIS team. 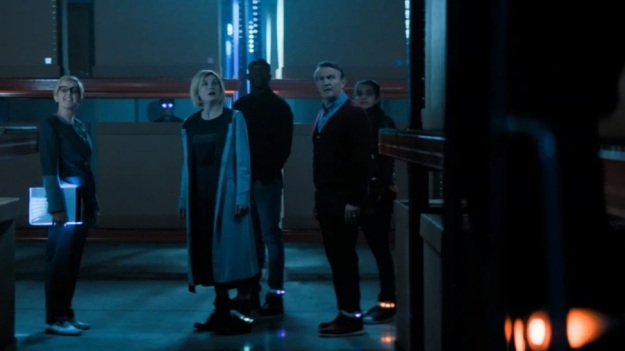 I didn’t know if any future episode would surpass this one. After watching the whole season though, I can definitely say that this has to be my favourite of Series 11 as I do watch it over again and again.

By the way, back in November 2018, I received the ‘Dr. Thirteenth’ Mr. Men/Little Misses book in the post from Amazon. Thankfully the bubble wrap did not explode as I popped it like you’d normally do. 😀

The DVD/Blu-ray special features on this episode are as follows. On Disc 3 of ‘The Complete Series 11’ of ‘Doctor Who’, there’s the ‘Kerblam!’ – Closer Look’ featurette.