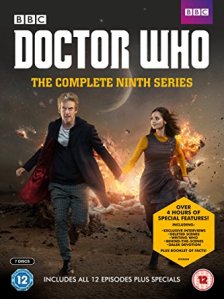 The Doctor and the Veil

Clara Oswald’s portrait from ‘Heaven Sent’ at the ‘Doctor Who Experience’, November 2016

Now we come to the penultimate episode of Series 9 called ‘Heaven Sent’ by Steven Moffat, which is the second of the three-episode story arc. And I’ve got to admit it, this is actually a pretty good one.

The episode takes place directly after the tragic death of Clara Oswald in ‘Face the Raven’. The Doctor has now been sent to this strange old rusty castle and he’s all alone, having to find a way out.

‘Heaven Sent’ is an episode that has this unique aspect to it. It features Peter Capaldi’s Doctor as the only person talking throughout. He literally takes centre stage without anybody else to interact with.

Wow! That’s impressive! I mean yeah, Jenna Coleman makes a brief appearance as Clara; there’s the Veil monster and there’s a little boy appearing at the end. But essentially, this is Peter Capaldi’s show!

I don’t think that’s been done before. Not probably anyway. There was ‘Episode One’ of ‘The Mind Robber’ with the Second Doctor, Jamie and Zoe as it just was them and nobody else to interact with.

There was also the Big Finish audio, ‘Scherzo’, featuring the Eighth Doctor and Charley where it was a two-hander between them. But this was the first time in the new series where it’s just the Doctor. 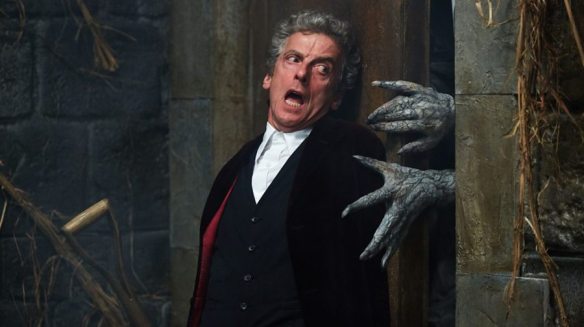 Peter Capaldi’s Doctor struggles on his own in this episode since he has just lost his dear friend Clara. He grieves and mourns the loss of Clara since there are occasions that he seems to be talking to her.

But the Doctor is determined to fight on and find out why he has been brought to this rusty old castle as well as who brought him here. It’s a fierce determination getting him killed more than once.

The castle location in this episode is interesting. Most of it is set builds and locations including Cardiff Castle and Caerphilly Castle. There are occasions when I thought it was filmed at Castell Coch. 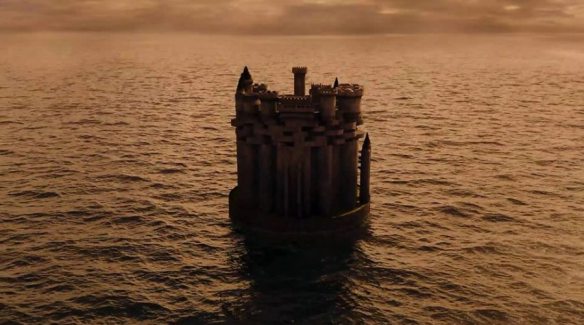 Anyway the castle prison that the Doctor’s trapped in seems to be a puzzle box of some sort. Gradually during the episode, the Doctor has to solve his way out of the puzzle in order to get freed.

Stalking the Doctor is the veiled wraith-like creature called the Veil. This is played by Jami Reid-Quarrell, who’d previously played Colony Sarff in ‘The Magician’s Apprentice’/’The Witch’s Familiar’.

Watching this episode has been a bit of a puzzle for me as is often the case with Steven Moffat episodes. But this is one of those occasions where Steven Moffat gets it right in terms of the writing.

We see the Doctor having to work out what’s going on and why he’s been brought to the castle. He asks questions aloud and sometimes talks to himself. That must’ve been a challenging thing to write.

Peter Capaldi delivers an excellent performance as the Doctor in this episode. He gets the chance to demonstrate varying layers of the Doctor’s character when he works out this tricky situation he’s in. 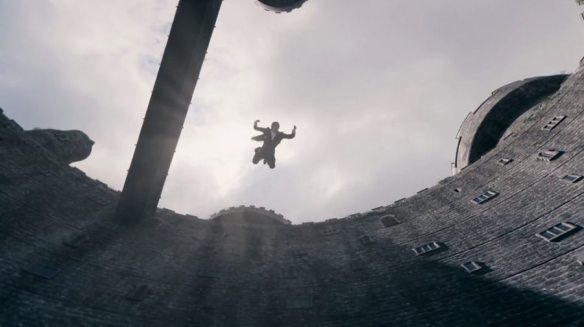 There are occasions when the Doctor seems to be at the point of death. This happens when he smashes a window and falls in the ocean below as well as him getting attacked by the Veil in a grave.

How does the Doctor survive? Well apparently, we get to go inside the Doctor’s mind as he enters the TARDIS console room and solves the problem on how to cheat death within a matter of seconds.

This is also where we get to have a cameo appearance of Clara Oswald in the Doctor’s mind. The Doctor asks questions and gains the answers when Clara writes them on a blackboard in the TARDIS. 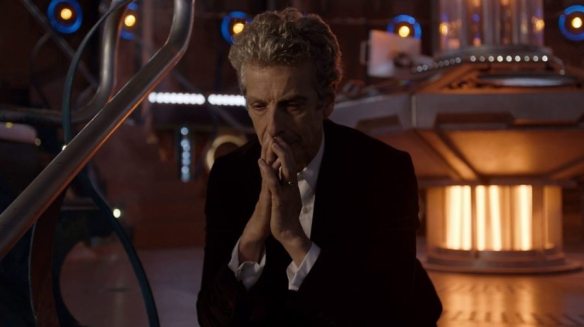 Very often, it is Clara facing backwards when the Doctor seems to be talking to her. She doesn’t speak when he’s talking to her in his mind. It shows how much the Doctor misses Clara at this point.

Fortunately the Doctor manages to cheat death and he gets out alive by surviving the plunge into the ocean and getting out of the Veil’s path. The episode illustrates how very clever the Doctor can be.

There is an occasion though where the Doctor seems to want to give up and ‘lose’, not ‘win’. It’s easy to see why. The Doctor feels once he’s got out of the trap he is in, he will never see Clara ever again.

Jenna Coleman as Clara then speaks to the Doctor in his mind and tells him not to give up. Well actually Clara tells to him to (ahem) get off his ‘arse’ and win! Strong language isn’t it, hey Clara? 😀

We do see the Doctor being a bit broody at times when he has dinner in the castle and continually mourns for Clara. There’s even a portrait of Clara in the castle. Was it taken from the Doctor’s mind?

Anyway, the Doctor soon works out what’s going on and how he can get out of the trap he is in. Apparently when the Doctor makes confessions on how ‘scared’ he is to the Veil, the Veil then stops.

And by ‘stop’, I mean the Veil freezes its attack on the Doctor. Once that happens, the castle reconfigures itself like a clock as one part of the trap gets solved. At least, I think that’s how it works.

The Doctor soon comes to realise that the Veil wants a certain confession from him. The Doctor works out that the confession is of one thing. Somebody wants to know the identity of…’the hybrid’.

(sighs) Okay, I think ‘the hybrid’ thread has been a thing that’s been going on for quite some time in Series 9. I don’t think it is a strong thread as it should be, but I’ll get into more why that is next time.

Apparently it’s believed by the Time Lords that a hybrid will come in the form of a half-Dalek, half Time Lord. This puzzles me regarding recent mentions of ‘hybrids’ during Series 9, but there you are.

The Doctor also notices that the stars are all wrong up in the sky when seeing them at night. He makes the deduction that he must’ve somehow travelled 7,000 years into the future. Yet he hasn’t time-travelled.

Eventually the Doctor comes to a door marked ’12’ where he goes inside and finds a wall made of a substance called Azbantium. Azbantium happens to a mineral that’s 400 times harder than diamond. 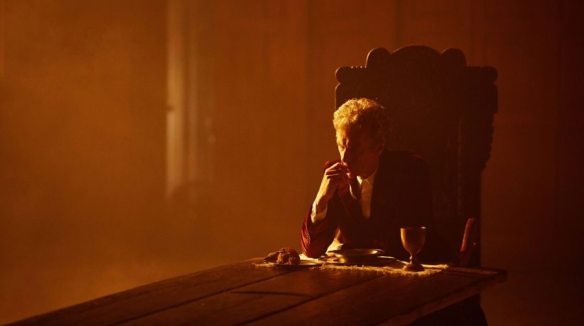 Also, when he’s back in the teleportation chamber room he arrived in at the start of the episode, he notices someone has scribbled the word BIRD in the dust on the floor. What does it mean though?

The Doctor then works out that the Azbantium wall is a way for him to get out of the trap he’s in. He also realises the word BIRD is a clue on how to get out in reference to a fairy tale called ‘The Shepherd Boy’.

Very soon, the Doctor starts punching the wall with his fist. Why couldn’t he have used a hammer? As he breaks the wall though, the Veil touches and burns him. This disables his regeneration process.

The Doctor writes the word BIRD in the dust himself before he disintegrates. Then a new Doctor appears (which is the same Doctor from the start of the episode) and the cycle begins all over again.

You have to be really alert as to what’s going on in the episode. It’s an example of how clever Steven Moffat’s writing in a ‘Doctor Who‘ episode can be, provided it is all done in a very coherent manner.

Like I said, the cycle begins again and the Doctor continues to repeat everything he did in the episode over and over. And I mean…everything! Except in those instances, there are two differences.

So essentially, the Doctor has been trying to get out of this trap for a long space of time in over billions of years. Yet, he’s still the same age. It’s complicated. Like I said, you have to be pretty alert.

The second difference of course is that every time the Doctor punches the Azbantium wall, he gets further and further in. This is despite the Veil burning him countless times as he keeps resurrecting.

Eventually, the Doctor manages to punch through the Azbantium wall and cracks it open to get out of the trap he’s in. The Veil then crumbles apart, revealing itself to be gears and the Doctor escapes.

Even for me, the climax to this episode where the Doctor escapes his trap is very impressive and clever. I kid you not! Watch this scene from this episode and see how really clever it turns out to be.

The episode ends with the Doctor now out of his trap. It turns out that he was in the confessional dial from ‘The Magician’s Apprentice’ all this time. Hmm! Intriguing! Bigger on the inside, I suppose.

The Doctor finds himself back on the planet Gallifrey. Yes! That’s what this episode’s been building up to. The Doctor’s returned to Gallifrey after all this time! I did wonder whether we’d get back there.

A young boy comes and the Doctor tells him to let the Time Lords know that he has returned. He also proclaims, when he talks to the confessional dial, that the Hybird’s identity happens to be…Me!

At first I thought the Doctor was talking about himself. But then I later discovered he was actually talking about Ashildr. I wish that was made clearer. Ashildr should have been named ‘One’ not ‘Me’.

‘Heaven Sent’ is a very strong episode in Series 9 of ‘Doctor Who’. I don’t think it’s as good as the Zygon two-parter, but it is a fine gem in the season. At the time, I hoped the season would be better.

This episode demonstrates Peter Capaldi’s talents as an actor as he delivers a great performance as the Doctor. This also demonstrates how Steven Moffat can be ‘good’ as a writer in the best of times.

The DVD special features on this episode are as follows. On Disc 2 of ‘Series 9 – Part 2’ of ‘Doctor Who’, there’s the ‘Heaven Sent’ and ‘Hell Bent’ – ‘Doctor Who Extra’ featurette.