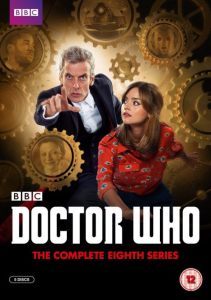 ‘IN THE FOREST OF THE NIGHT’

School Trip with the Twelfth Doctor 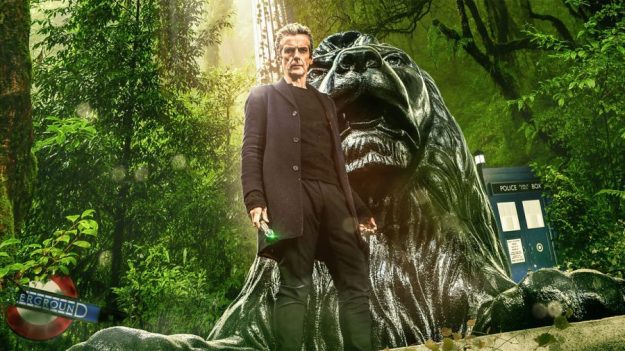 This is a fascinating ‘Doctor Who’ episode by Frank Cottrell Boyce. ‘In the Forest of the Night’ is about an overgrown forest on Earth. The Doctor with Clara, Danny and some kids solve this peculiar mystery.

At the start, Clara and Danny take a field trip of kids from Coal Hill School to stay overnight at a London museum. They wake and discover London as well as the whole Earth overgrown with a forest of trees.

The tension rises during the episode since there are solar flares from the sun approaching the Earth. There are also wolves and tigers on the loose from the zoo in the forest, which was really tense to see. 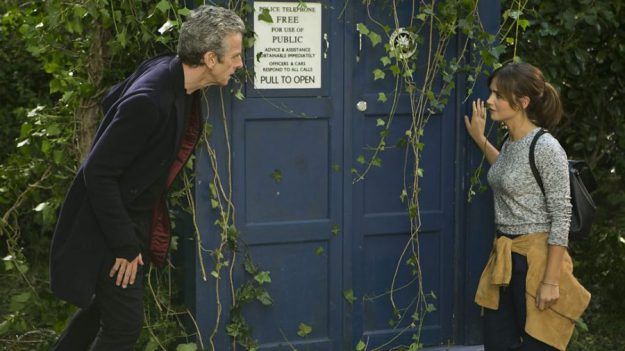 Yeah even animals from London Zoo are running wild in this overgrown forest. I found it tense when the Doctor and Clara were saving Maebh from wolves. A tiger then comes along and Danny saves them.

The kids are really good in this episode. The main child star is a girl called Abigail Eames as Maebh. Maebh hears these voices when she makes contact with the forest. She also finds the Doctor’s TARDIS.

It was intriguing how Maebh got lost in the forest and how she kept waving her hands in her face to get rid of these thoughts from the trees. She predicts the approach of the solar flares in her workbook. 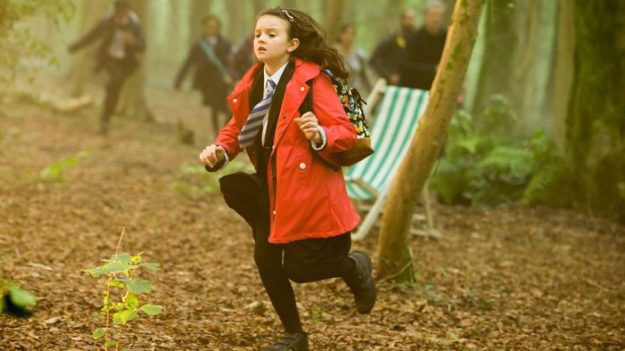 It was quite disturbing when Maebh got possessed by the spirits of the trees and talked the Doctor, Clara and the others. Her high-pitched voice mixed in with a deeper, earthy voice which was so freaky.

As well as Maebh, there’s also Jayden Harris-Wallace as Samson, Ashley Foster as Bradley and Harley Bird as Ruby. These three kids deliver decent performances and do have some unique character traits.

Bradley used to punch to get what he wants but says ‘please’ more often. Ruby seems an expert on trees and notices Clara and Danny’s romance. Samson doesn’t like their group called a team by Danny. 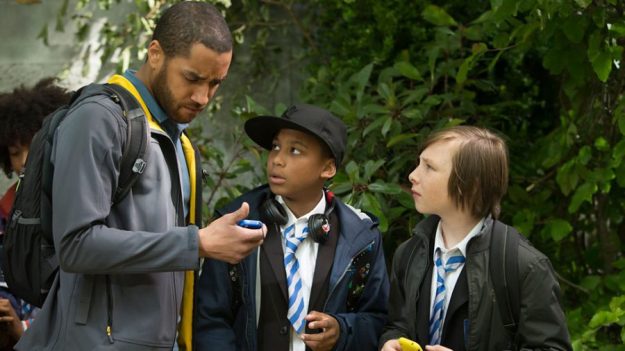 I like Samuel Anderson’s performance as Danny Pink in this episode. Danny copes well with having an adventure with the Doctor, Clara and kids in the overgrown forest, but is rather reluctant adventurer.

Danny shows more concern for the kids’ safety than Clara does, which she admires, even though he lost Maebh in the episode. I like the scenes Danny and Clara share when they’re discussing the Doctor.

In this episode, Jenna Coleman as Clara doesn’t have to worry about balancing her school teacher duties and adventuring in time and space when the forest overgrows on Earth. Albeit it’s really flawed. 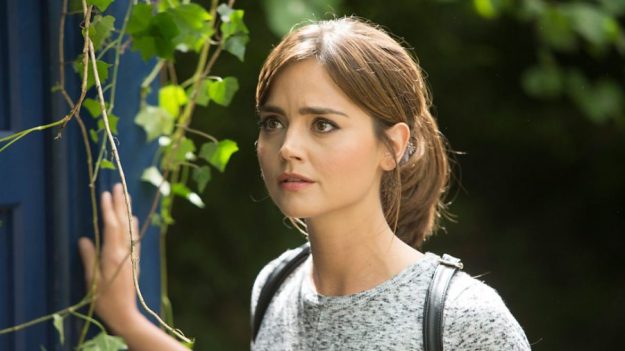 Clara seems keen on having an adventure with the Doctor rather than looking after the kids like Danny does. Although she is willing to allow the Doctor to escape when the Earth is seemingly about to burn.

Peter Capaldi is exceptional as the Doctor in this episode. At first, he seems dismissive especially when he has Maebh in the TARDIS and when he sees the overgrown forest in London. But he works this out.

I like how the Doctor tells Clara, Danny and the kids in the TARDIS what’s going on regarding the trees protecting the Earth from the solar flares. It was funny seeing his reaction to having kids in the TARDIS. 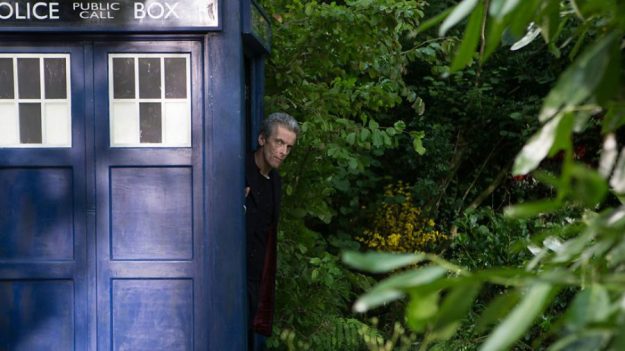 It was fun to see familiar London landmarks overgrown with trees in the overgrown forest on Earth. These include the Trafalgar Square’s lion and the Nelson Column that overlooks the whole of London.

‘In the Forest of the Night’ is a pretty decent episode in Series 8 of ‘Doctor Who’. It’s not an exciting entry but I enjoyed the drama and tension throughout and it was fun to see an overgrown Earth forest. 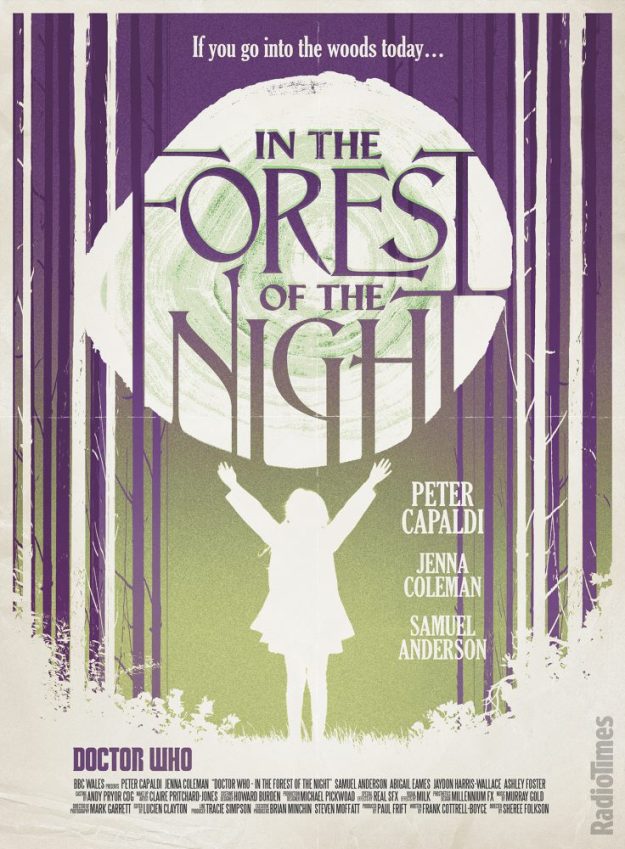 The DVD special features on this episode are as follows. On Disc 5 of ‘The Complete Series 8’ of ‘Doctor Who’, there’s the ‘Into The Forest Of The Night’ – Doctor Who Extra’ featurette.

On Disc 3 of ‘The Complete Series 8’, the highlight for me was the ‘Doctor Who: The Ultimate Time Lord’ documentary with Peter Davison. This features behind-the-scenes cast and crew interviews, including the Doctors – David Tennant, Colin Baker, Sylvester McCoy, Paul McGann, Peter Capaldi, etc. 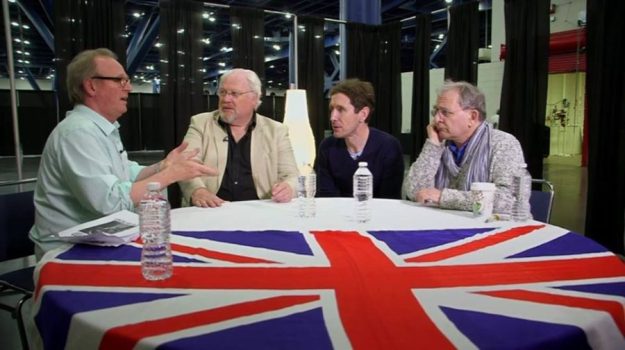 DOCTOR WHO: THE ULTIMATE TIME LORD

This was the highlight of Disc 3 from ‘The Complete Series 8’ DVD. I loved watching ‘The Ultimate Time Lord’ documentary with Peter Davison. I wish I saw this and ‘The Ultimate Companion’ documentary at the time Series 8 was being shown on TV as it would have helped me engage further with this show.

In this documentary, Peter Davison is on a quest to find out what makes the ultimate Doctor in ‘Doctor Who’ following the announcement of Peter Capaldi as the Twelfth Doctor. Having met Peter Davison at a number of conventions over the year, I found it fun to see him presenting this great documentary.

I liked Peter’s interview with David Tennant in his own private cinema. Really?! Peter Davison has his own private cinema? It was also nice to hear David sharing his thoughts on playing the Doctor with Peter. It was very surreal especially since David is Peter’s son-in-law and worked with him in the series.

I greatly enjoyed Peter’s interview (if you can call it that) with Colin Baker, Sylvester McCoy and Paul McGann at a science-fiction convention in America. Colin, Sylvester and Paul are of no help and it was really funny to see. I liked how polite and patient Peter is, despite them being a ‘fat lot of good’ indeed.

Peter also has interviews with crew members like casting director Andy Pryor and music composer Murray Gold. He even has an interview with showrunner Steven Moffat, who shares his fairly valid thoughts on the matter. Peter also talks with Dalek voice artist Nicholas Briggs on this subject matter.

The documentary ends with Peter Davison having a conversation with Peter Capaldi and how he viewed playing the character in the series. It’s great way to end the documentary especially with the latest actor to play the Doctor. Overall, ‘The Ultimate Time Lord’ documentary was so exciting indeed.