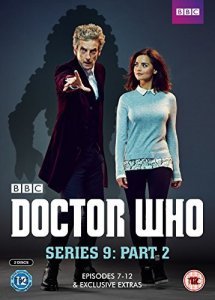 The Sandmen with the Twelfth Doctor and Clara

Wait a minute! Where’s the opening ‘Doctor Who’ titles and music?! I was waiting for this to come up any time soon whilst watching this episode first time on TV! They didn’t come up at all in the tale!

When re-watching this episode again, I noticed in the shot where the screen is filled with text and letters that it was spelling out the words DOCTOR and WHO visibly momentarily. That doesn’t count!

And yes, I know that video features the opening titles for ‘Before the Flood’ with the rock theme version, but it’s the best I could come up. Besides they should have used that theme version anyway.

Anyway, let’s talk about this episode. And it’s probably one of the low points for me when watching Series 9 of ‘Doctor Who’ on TV back in 2015. This is ‘Sleep No More’ and the story is by Mark Gatiss.

Now before we go on any further, I’d like to point out that I actually like Mark Gatiss’ ‘Doctor Who’ stories in the TV series. He has written some fine stuff especially for the RTD and Steven Moffat eras. 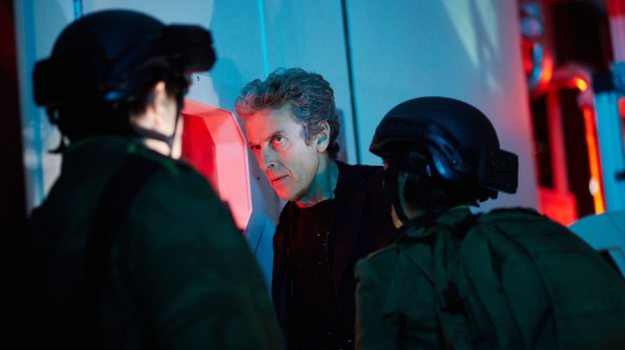 However, in my humble opinion, I feel this episode is probably Mark Gatiss’ weakest contribution to the series. It is certainly not the worst episode he’s done as there are interesting concepts featured.

But I can’t say this is one of Mark Gatiss’ best episodes ever. It’s meant to be an episode to scare people and I’m sure it scared a lot of kids. But for me, this episode left me feeling so uncomfortable.

Now there are differences of opinion with regards to this episode. I’ve read some critics regard this episode highly, applauding the episode’s ambition and one praised the writing and an actor’s acting. 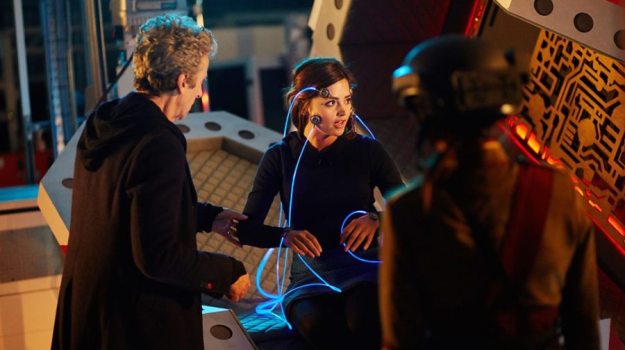 On the other side of the spectrum, this episode has built a reputation for being one of the weakest stories of the new series by fans. It even had the lowest ratings when originally transmitted upon TV.

In order to understand this, I’d better give a little background to the story’s conception. Mark Gattis originally contributed this episode for Series 8. This was held back in favour for ‘Robot of Sherwood’.

Now this episode is rather unique as the plot is framed around the concept of found footage. It consists of recordings recovered from the wreckage of the Le Verrier space station, the tale’s setting.

Here’s what the plot of the episode is about. We as the viewer are addressed by Gagan Rassmussen, a researcher aboard the Le Verrier space station. We are warned not to watch this video as it starts.

Eventually we’re shown four soldiers of a rescue ship sent from Triton to find any survivors aboard Le Verrier. They then bump into the Doctor and Clara who have just arrived on Le Verrier by chance.

The Doctor, Clara and the soldiers soon find themselves chased by monstrous Sandmen aboard the space station. The group has to find out what is going on and perhaps stop some great catastrophe.

That is essentially the plot of the episode. But like I said, the execution of the episode in seeing things from various perspectives according to found footage is rather disconcerting for me to watch.

Now I’ve played a video game called ‘Star Trek: Voyager – Elite Force’. When I was playing that video game, I was seeing things from my perspective as I would be playing the character in the story itself.

I think what would’ve made this episode better is that we have the story all told from the perspective of one person. Not many people, as we’d be able to engage with a particular character.

If Mark Gattis wanted us to see the episode from various perspectives, fine. But we should be given identification at the bottom of the left or right hand screen to see whose view we’re seeing through.

Half the time, I couldn’t tell what perspective I was looking from whether it was from Nagata, Chopra, Deep-Ando or 474. We even got to see from the perspective of Clara at some points in this.

Hang on! How come we saw from Clara’s perspective? I assumed we were looking through the head cameras of the four soldiers in the episode. It’d make less sense as Clara hasn’t got a head camera.

But that does become part of the episode actually. Despite the disparaging perspectives, the Doctor explains that the found footage is being recorded via organic sleep patches and not by camera work.

This was quite disturbing to think about as I re-watched the episode for this review. Despite that, it still made me enjoy the episode less as I got confused by what was occurring towards its conclusion.

Reece Shearsmith guest stars as Gagan Rassmussen in the episode. Reece’s previous ‘Doctor Who’ association was him playing Patrick Troughton in the docu-drama, ‘An Adventure In Space and Time’.

At first, I assumed Rassmussen was a victim in this episode as he’d been recording narration from the beginning of the episode. It then turned out that Rassmussen was actually the villain of this tale.

This made things give me more headaches as I watched the episode. It made me wonder why he was doing these things when being infected and why he was recording a certain video for us to see.

The episode also features Elaine Tan as Nagata; Neet Mohan as Chopra; Paul Courtenay Hyu as Deep-Ando and Bethany Black as 474 who is a ‘grunt’. These four are supposed to be a rescue team.

When watching the episode, I did wonder whether these Sandmen were the same ones from ‘The Entropy Plague’. I would’ve liked that as this would make sense and form a connection to Big Finish. 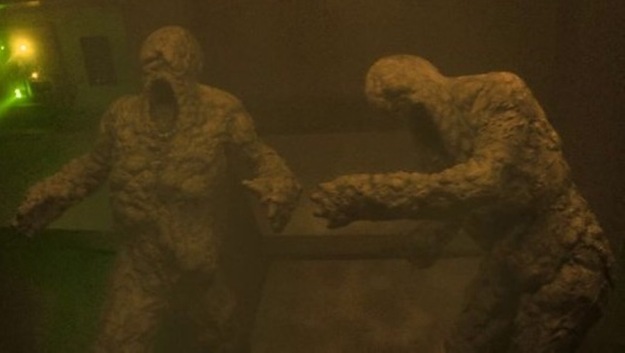 I also wouldn’t have minded it if one of these Sandmen was the actual Sandman from the Spider-Man universe. That would’ve been pretty interesting compared to what this actual episode offered.

I wish I could say something about Peter Capaldi as the Doctor and Jenna Coleman as Clara, but there’s not really much to say about them. Oh they do give great performances in this tale, no doubt.

But all they do is talk plot-related stuff. Not character-related. They essentially give the audience what we need to know in order to understand what’s happening with the Sandmen and everything.

The disparaging perspectives and trying to get your head around what’s going on makes you appreciate the characters less, both the regulars and the guest stars. It’s something that feels so frustrating.

This is also an episode where the Doctor ultimately fails and the villain wins. Even the Doctor has no idea what’s been going as he says none of these events make any sense. You and me both, Doctor!

The episode ends on a rather disturbing note. As Rassmussen says farewell, he then reveals that he was actually a Sandman all along. He starts to crumble, speaks with a deep voice and scares the kids!

This could’ve been a Halloween episode if shown on Halloween night. However, this did not happen due to one glaring thing. The episode was shown on the 14th of November, two weeks after Halloween.

I guess there were transmission issues behind-the-scenes and that there was a mistake to show the Zygon two-parter first before the ‘Sleep No More’ episode. I’m guessing this, but it sounds plausible.

‘Sleep No More’ is not one of my favourite episodes from Series 9. It does have a unique approach in telling a story by Mark Gattiss. But I’m sorry, Mark. I just felt really unhappy after I watched this episode.

It would’ve been better if the Doctor won at the end. I know that this episode was meant to scare people. It could still be done. But if the Doctor thought he had won, we would appreciate the end twist.

I did like the concept of the Morpheus sleeping pods featured in the episode, especially when Clara gets inside one of them. I also liked the ‘Mr. Sandman’ song. It reminded me of ‘Back to the Future’. 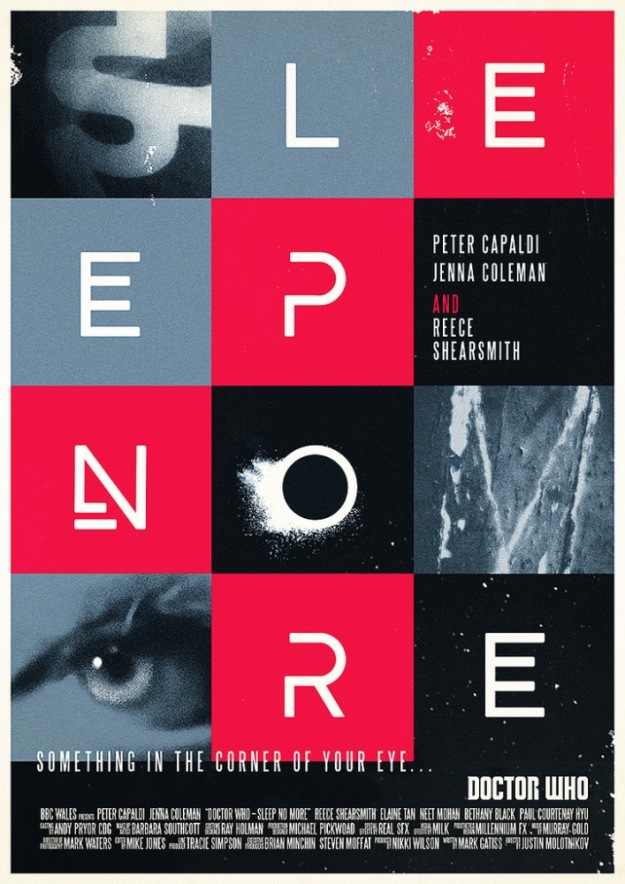 The DVD special features on this episode are as follows. On Disc 1 of ‘Series 9 – Part 2’ of ‘Doctor Who’, there’s the ‘Sleep No More’ – Doctor Who Extra’ featurette.