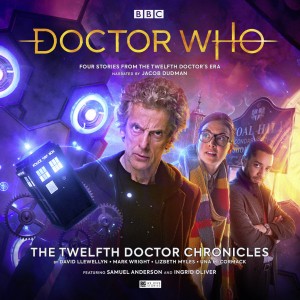 The second story in ‘The Twelfth Doctor Chronicles’ is ‘War Wounds’ by Mark Wright. As well as Jacob Dudman narrating the story and playing the Doctor, it also has Samuel Anderson’s Danny Pink!

Mark Wright is a writer I’ve come across before in Big Finish, including stories that he’s co-written with Cavan Scott. These tales include ‘Project: Twilight’, ‘Project: Lazarus’ and ‘Night of the Whisper’.

He’s also written a number of Twelfth Doctor comics over the years. I’m not really into reading comics, but script editor Matt Fitton picked Mark Wright to pen a Twelfth Doctor story based on that.

‘War Wounds’ was a highlight for me to listen to, especially since Samuel Anderson was back to play Danny Pink from Series 8. This is the first time I believe that Samuel’s done a Big Finish audio story. 😀

Danny Pink is a character I quite like in ‘Doctor Who’. Whilst Series 8 had problems, I always enjoyed the love story between Clara and Danny. I’m quite saddened Danny didn’t return for Series 9 on TV.

I’ve met Samuel Anderson in real-life at the ‘Bournemouth Film and Comic Con’ in August 2015. He was a great guy to meet. I also had Danny appear in ‘The Impossible Girl Returns’ set after Series 9. 🙂

So as you can imagine, Danny’s character was easy to get into when listening to ‘War Wounds’. And it was fascinating to hear a Twelfth Doctor adventure with Danny whilst Clara’s not about in the tale.

In the story, Danny finds the TARDIS in a Coal Hill School storeroom with the door open. Venturing inside, Danny finds himself whisked off on an adventure with the Twelfth Doctor to an alien world. 🙂

It was fascinating to hear the Doctor and Danny’s relationship in this episode. The Doctor clearly doesn’t like Danny due to him being a former soldier, which is carried over so well from the TV show.

Danny finds the Doctor pretty infuriating when he seems to be belittling him at times and not taking him seriously. Danny must find ways to prove to the Doctor that he has a compassionate heart here.

I like how Danny’s experiences of being a soldier in places like Afghanistan and Iran are touched upon in this story. There is also a sense of sadness to Danny’s character when he fought as a soldier.

I enjoyed Danny being the moral compass in this story whilst interacting with alien characters who are soldiers on this planet. The Doctor is often pretty rude and Danny has to apologise on his behalf.

Jacob Dudman’s voice as the Twelfth Doctor sparks off well against Samuel Anderson’s performance as Danny. It’s like Peter Capaldi’s Doctor and Danny are really interacting with each other in this tale.

The Doctor does get to use some Venusian aikido in this story, echoing what Jon Pertwee did in his era of ‘Doctor Who’. Danny is pretty surprised by the Doctor’s skills once he’s knocking out a soldier.

It was also intriguing to hear the competition between the Doctor and Danny over their feelings towards Clara when she’s absent. Danny doesn’t approve of the lifestyle Clara has with the Doctor.

The Doctor often mocks Danny when he’s being concerned about Clara’s well-being and such. But the Doctor does come to see that Danny has a moral stance in life despite having fought as a soldier.

It was intriguing to hear the hospital aspects of this story once Danny gets put into hospital. Samuel Anderson is also very good in the comedic aspects when screaming for help once on an alien planet.

At the end, the Twelfth Doctor loses his memory of the adventure he had with Danny once he’s been injected with something. He pushes Danny out of the TARDIS back in Coal Hill where they started. 😀

Overall, ‘War Wounds’ has been a pretty good audio adventure with the Twelfth Doctor and Danny. I like how their relationship gets explored here and Jacob Dudman and Samuel Anderson are brilliant.

The CD extras are as follows. There are behind-the-scenes interviews with Jacob Dudman, Samuel Anderson, writer Mark Wright, director Helen Goldwyn and script editor Matt Fitton on ‘War Wounds’ which I enjoyed hearing.