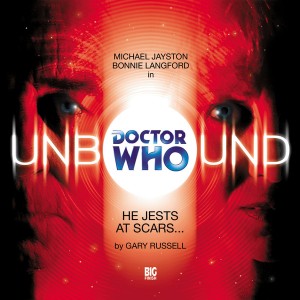 ‘HE JESTS AT SCARS…’

‘He Jests At Scars…’ is one of the ‘Unbound’ audio dramas in ‘Doctor Who’ by Big Finish. But this one does something completely different. It looks at one of the alternative incarnations of the Doctor that could’ve been as seen in the TV series. This looks at the Valeyard, the darker incarnation of the Doctor.

The Valeyard appeared in one TV season of a story in ‘Doctor Who’, which was ‘The Trial of a Time Lord’. In that story, the Valeyard was the prosecutor for the Sixth Doctor’s trial where he was accused for transgressing the laws of time and interfering with other planets. But there was this shocking twist.

As the story progressed towards its conclusion, the Valeyard was revealed to be…how did the Master put it…’an amalgamation of the darker sides of’ the Doctor’s ‘nature, somewhere between’ his ‘twelfth and final incarnation’. And as the Master put it, he did not ‘improve with age’. So the Valeyard’s an evil Doctor. (gasp)

Now that we’ve gone past the thirteen Doctors stage of the character’s first regeneration cycle, we can assume the Valeyard came in between when Matt Smith’s Doctor regenerated into Peter Capaldi’s Doctor. Because the Eleventh Doctor’s the twelfth incarnation and the Twelfth Doctor’s the thirteenth.

Which makes me wonder why Steven Moffat didn’t take advantage of having the Valeyard appear in a Twelfth Doctor story or something like that. You also begin to wonder how the Valeyard was created between the Eleventh and Twelfth Doctors when TV audiences didn’t get to watch that creation occur.

We as ‘Doctor Who’ fans can speculate on this however. In my mind, the Valeyard could’ve been created when the Eleventh Doctor’s regeneration energy escaped into space as he was destroying a Dalek fleet ship in ‘The Time of the Doctor’. The energy could’ve entered a withered hand to create the Valeyard.

Thankfully Michael Jayston has been able to reprise his role as the Valeyard in the Big Finish audios of ‘Doctor Who’. He’s done a few with Colin Baker’s Doctor including ‘Trial of the Valeyard’ and ‘The Sixth Doctor: The Last Adventure’. And he’s also done this ‘Unbound’ audio story that features the Valeyard.

It was pretty surreal to hear this story where the Valeyard was the main star of the show. In this case, the Valeyard’s not so much a hero but an anti-hero. You find out what could’ve been had the Valeyard defeated the Sixth Doctor at ‘The Trial of a Time Lord’s climax and what chaos and disorder was made.

This could’ve been a follow-up to the original ending that was meant to be for ‘The Trial of a Time Lord’. Had script editor Eric Saward had his way with inputting Robert Holmes’ anti-climax of an ending of the Sixth Doctor and the Valeyard fighting each other in the void, this could be what happened next.

This audio drama was written and directed by Gary Russell, who delivers a compelling adventure featuring Michael Jayston as the Valeyard and Bonnie Langford as Melanie Bush. The story is filled with lots of continuity references as the Valeyard keeps changing plenty of events in our own universe.

It was interesting where Gary Russell got part of his inspiration from for this audio adventure as it came from the Marvel Comics mini-series of ‘The Incredible Hulk’ called ‘Future Imperfect’ featuring an evil version of the Hulk. Mel even echoes the Hulk and says, “You wouldn’t like me when I’m angry.”

Michael Jayston as the Valeyard in ‘He Jests At Scars…’

I’ve met Michael Jayston at two ‘Doctor Who’ conventions including ‘Regenerations 2013’ and ‘Regenerations 2016’ in Swansea, both Septembers in 2013 and 2016. I’ve had nice chats with Michael about his role as the Valeyard and even had a photo with him and Colin Baker at the 2016 convention.

I’ve also met Bonnie Langford at the ‘Bournemouth Film and Comic Con’ in August 2015. She was lovely to meet and I enjoyed chatting to her at the comic con. It was nice to hear this audio adventure with Michael Jayston as the Valeyard and Bonnie Langford as Mel, knowing that I’ve met them already.

The character that we root for as a hero in this is Bonnie Langford as Mel. She was there when the Sixth Doctor had his trial and is determined to find a way to stop the Valeyard from causing so much harm and chaos. As the story progresses, she gets bitter and is no longer the go-lucky person she was.

Michael Jayston is sensational as the Valeyard in this audio adventure. It’s clear he’s not the Doctor-like character we know and love from the TV series. In the story, he’s trying to eradicate all that he used to be as the Doctor. He tries to kill off his first six incarnations whilst his amalgamated self is still intact.

The story does get complex to listen to especially towards it climax where it feels a little rushed. But it was intriguing to hear how the Valeyard sets about undoing all he did as the hero Doctor we know and love. He’s ruthless in his endeavours and forgets the consequences of his actions changing history.

What examples are there that the Valeyard does to change history? Well he destroys the Daleks as instructed by the Time Lords in ‘Genesis of the Daleks’; wakes the Silurians early in ‘Doctor Who and the Silurians’ and he uses the Doomsday weapon from ‘Colony In Space’ to destroy his planet Gallifrey.

In doing these actions, the Valeyard never has meetings with significant people in his life and alters things radically that affect the nature of the known ‘Doctor Who’ universe. The Valeyard doesn’t care though, as he seeks to undo everything his first six incarnations did, believing himself to be superior.

The Valeyard’s arrogance gets the better of him when he attempts to stop the Fourth Doctor from getting to ‘Logopolis’. But in doing so, he destroys the Fourth Doctor’s TARDIS as well as Logopolis that creates a paradox to unravel the web of time. The Valeyard hopes to correct this by destroying Logopolis early.

But that causes more complications for the Valeyard. Destroying Logopolis early doesn’t help. The First Doctor never visited Logopolis as the Valeyard killed him first. It’s a challenge to get your head around the tale’s continuity, but it’s fun to listen to. I enjoyed how the Valeyard made a mess of things.

As well as Michael Jayston and Bonnie Langford, the story also features Anthony Keetch as Co-ordinator Vansell. Vansell has appeared in other ‘Doctor Who’ stories including ‘The Sirens of Time’, ‘The Apocalypse Element’ and ‘Neverland’. Vansell gets curious with how the Valeyard changes things.

Instead of Mel accompanying the Valeyard as his companion, Juliet Warner guest stars as Ellie Martin, the Valeyard’s proper companion. I was expecting Mel to be the Valeyard’s companion in this story, but there you are. In this adventure, Ellie helps the Valeyard to undo all actions of the previous Doctors.

There’s also Jane McFarlane as Nula and Mark Donovan as Gerrof, who Mel encounters when trying to find the Valeyard in his own Chronopolis. Nula seems to regard Mel with the highest respect whilst Gerrof disregards her. Mel shoots Gerrof with a Time Lord energy weapon, which was a shock to hear.

I enjoyed the interaction between Mel and the Valeyard in this adventure. Mel is horrified that the Valeyard isn’t the Doctor she knew. She hoped there would be traces of the Doctor left in him, but he turns out to be a monster. She’s determined to defeat the Valeyard, despite him outwitting her in this.

I liked some of the echoes from previous Sixth Doctor stories in this adventure where Mel tries to get through to the Valeyard. This includes Mel telling the Valeyard that he is still the Doctor ‘whether he likes it or not’, echoing ‘The Twin Dilemma’. And there’s the Valeyard who repeats ‘carrot juice’ to Mel.

I also liked it when the Valeyard mentioned the names of companions the Doctor had in the past and what could’ve been the future had the Sixth Doctor lived. This includes Steven; Dodo; Peri; Evelyn; Ace; Hex; Charley and C’rizz. Mel gets given a Time Ring like the one from ‘Genesis of the Daleks’ here.

The conclusion was a little baffling when I heard it and it seemed rather bleak as the Valeyard and Mel seem to be trapped inside a TARDIS structure that was shrinking and they had no means of escape. This could mean that the Valeyard and Mel can’t travel or escape and that this is their definite demise. 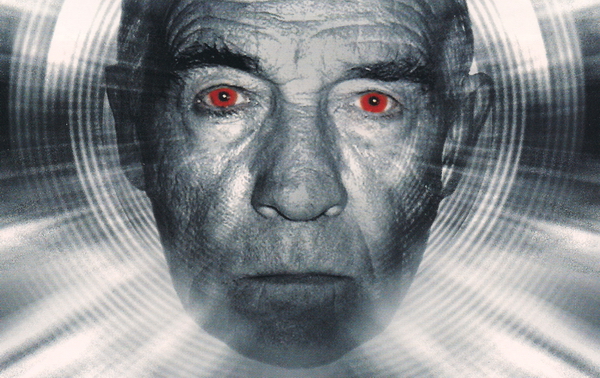 ‘He Jests At Scars…’ has been interesting and compelling audio adventure to listen to. This is an ‘Unbound’ story in the ‘Doctor Who’ series where the Valeyard could’ve had his own series. Michael Jayston excels as the evil Valeyard and I enjoyed Bonnie Langford’s Mel interacting with the character.