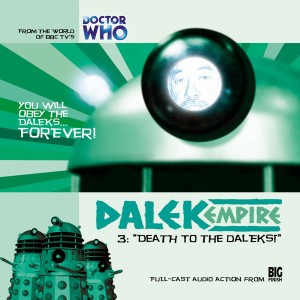 The Daleks Are Coming! – Part 3

‘”Death to the Daleks!”‘ is the third chapter/episode/audio drama out of the four-part CD collection in the ‘Dalek Empire’ spin-off series. It is a 70-minute episode. The first two episodes were ‘Invasion of the Daleks’ and ‘The Human Factor’ before this. In this episode, things are getting deadly serious!

This spin-off series is written; produced and directed by Nicholas Briggs who also voices the Daleks with Alistair Lock and Steven Allen (in this audio episode). It also stars Sarah Mowat as Susan ‘Suz’ Mendez with Mark MacDonnell as Albert ‘Alby’ Brook and Gareth Thomas as Kalendorf.

First off, I was shocked and surprised to discover that Alby’s friend Gordon Pellan in the first two episodes of this series was actually a Dalek agent – a super-enhanced Roboman. No wonder Pellan was getting more pessimistic, as we learn the truth from Alby’s space security boss in this episode.

It has been many years since the Daleks invaded the Earth Empire. Alby is sent on a mission by the Space Security Service authorities, which could mean killing the woman he loves. Meanwhile with Suz and Kalendorf, their lives are at risk as their secret plan to defeat the Daleks is soon discovered.

For this episode, the threads of the Dalek invasion of the galaxy start to become clearer. The stakes also get higher, especially when the message of “Death to the Daleks!” to everyone and the mysterious ‘Project Infinity’ is involved. It makes for tense drama and an action-packed adventure.

Mark McDonnell as Alby Brook has his personal mission to rescue Suz endangered, especially when his past catches up with him. Alby is horrified with the notion that he may have to kill Suz to save the galaxy. I liked how Alby is determined in the hope of seeing Suz again, even though things are bleak. Alby has now got cyborg legs in this episode. His real legs were blown off in the previous episode.

There’s a moment I liked where Alby hears Suz’s voice. He accesses surveillance transmissions between her and the Daleks. He soon realises that the Daleks know he’s watching them and has to stop them knowing. I liked how Alby reflects on hearing Suz’s voice and that it’s somehow changed for him.

There’s an interplanetary police officer in this episode named Mirana (played by Teresa Gallagher). Mirana is on the hunt for Alby as he has committed acts of crime during his mission to save Suz. Alby gets annoyed with Mirana chasing him, and he tolerates her presence when she catches up with him.

Sarah Mowat stars as Susan Mendez, the ‘Angel of Mercy’. Suz has become more bitter and colder, since she became a slave to the Daleks back on Vegas VI. Her friendship with Kalendorf is on edge and she’s sometimes confident that she can control the Daleks. But those words bite back at her.

There’s a moment in the episode (and it’s in the comic book art of the CD notes), where the Daleks exterminate the slave workers who removed the surveillance devices in her office. It’s a horrific moment and it upsets Suz when she realises that she can’t control the Daleks as she thinks she can.

Gareth Thomas as Kalendorf delivers an interesting contrast to Suz’s association with the Daleks. Suz and Kalendorf have been working together in secret, but there is friction between them. Kalendorf’s powers as a Knight of Velyshaa are touched upon, as they become vital in overthrowing the Daleks.

I liked the scene between Suz and Kalendorf when they’re out in the open and they reflect on the eve before they’re about to spread their message of “Death to the Daleks!” to everyone. It provides the reconciliation between those two and it touches upon how Suz feels about Alby in this moment.

The Dalek Emperor makes another appearance in this episode of the ‘Dalek Empire’ series. There’s also a Red Supreme Controller Dalek and it really means business when Suz and Kalendorf talk to it.

Again Tim Keable’s comic book art for the CD sleeve notes of ‘”Death to the Daleks!”‘ is very impressive. The extract from a coded transmission by the Space Security Service about the Red Supreme Controller Dalek is at the back of the CD sleeve notes and it’s so interesting and enjoyable to read.

Like the previous two episodes, there aren’t any CD extras or ‘coming soon’ trailers featured at the end of this disc. So no trailers for any new ‘Dalek Empire’ episodes or ‘Doctor Who’ stories sadly. This audio episode ends on a cliff-hanger and one that I wasn’t expecting!

‘”Death to the Daleks!”‘ is a great third chapter to this ‘Dalek Empire’ series, as things become more deadly serious. With the episode ending on a cliff-hanger, I wondered what was going to happen in the final instalment of the series. I had shivers and worries. Will the Daleks ever be defeated in this?

The next episode in the first ‘Dalek Empire’ series is ‘Project Infinity’.