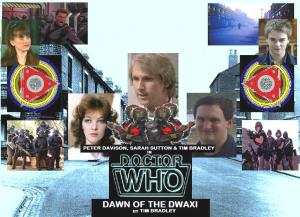 Welcome to ‘Dawn of the Dwaxi’ of ‘The Fifth Doctor by Tim Bradley’ series! It was the second ‘Doctor Who’ fan-fiction story I wrote in early 2012 and was the first of my third season of stories with the Fifth Doctor, Nyssa and Billy. It was also the first six-part ‘Doctor Who’ adventure I wrote.

It was pretty exciting and challenging for me, as I’d never written a six-parter before. Beforehand, I’d done four-part stories and they were challenging enough. But to stretch out a story into six episodes was a mean task. But I wanted to try it out and make this as epic a ‘Doctor Who’ tale I could imagine.

I suppose my inspiration came from listening to ‘The Game’, another six-part ‘Doctor Who’ adventure by Darin Henry for Big Finish with the Fifth Doctor and Nyssa. I wanted to write the new six-part tale in the Fifth Doctor era featuring the Doctor himself and his loyal friends, Nyssa and Billy.

I also wanted to explore Billy’s back-story and have the TARDIS return him to his home with the Doctor and Nyssa joining him. A lot had happened to Billy in the time he travelled in the TARDIS, especially in his relationship with Nyssa. Check out ‘The Salvador Trilogy’ to find out more with this.

This ‘Doctor Who’ story is essentially the ‘Aliens in London’ story for Billy where he returns home to reunite with his parents and face the consequences of leaving home to travel in the TARDIS. You can say this is also ‘The Reaping’ story by Big Finish for Billy, as I took inspiration from that audio adventure too.

To add to the reality of what Billy’s home is like when the TARDIS lands there, I drew some more inspiration from watching some ‘Coronation Street’ episodes. Not only was this to provide a soap-opera reality to Billy’s home, but also a 1960s reality since I watched ‘Corrie’ episodes from the 60s.

This also helped to give a grittier reality to Billy’s home in Churchwood Street in Cardiff, as the story featured the return of the Dwaxi. If you don’t know who the Dwaxi are, check out their first appearance in ‘Doom of the Daleks’. It was great to be writing for the Dwaxi again in this adventure.

The Dwaxi were a challenge to write in ‘Dawn of the Dwaxi’. As opposed to ‘Doom of the Daleks’ where it was an outer-space adventure in the 26th century, this story has the Dwaxi in Churchwood Street on 1960s Earth. It gives the personal edge for Billy, as his return home isn’t what he expected.

There are returning themes featured in ‘Dawn of the Dwaxi’ from ‘Doom of the Daleks’. This includes the usage of drugs by the Dwaxi. The drug theme is emphasised clearly in this story, especially as it connects to the human characters in 1960s Churchwood Street and how their lives become affected.

Another theme and source of inspiration for this story are the acts of terrorism in today’s society. I wanted to reflect how shocked and appalled I was by seeing such horrible terror acts committed in the world. So I’ve translated that into how the Dwaxi are attacking Churchwood Street in the 1960s.

In ‘Doom of the Daleks’, the Dwaxi’s leaders named the Directors were mentioned. But they were never seen in that story. This time however, the Directors make their first appearance in ‘Dawn of the Dwaxi’. Brave in to find out who they are. Be ready for a shock. They may not be what you expected.

The story features characters that I would reuse later on in future stories by me with the Fifth Doctor, Nyssa and Billy. This includes Billy’s parents, Enid and Fred Walker; Sean Black, Billy’s best friend, Alexandra Black, Sean’s wife; etc. Some of these characters have various twists for this story.

It was great fun to write for the Fifth Doctor, Nyssa and Billy again. I was pretty invested in their characters and found them easier to write for. In this story, the Doctor becomes curious about what’s going on in Billy’s home as Nyssa and Billy find out how time travel will affect their relationship.

I don’t want to reveal too much in this introduction to avoid spoiling the surprise for you. This story took me at least three months to write from January to March in 2012. It was quite a challenge but an enjoyable one at that, as I got to explore how to keep a story within this six-episode structure.

I hope you’ll enjoy ‘Dawn of the Dwaxi’. This story will feature challenging dilemmas for our main heroes, especially for Nyssa and Billy. Their relationship will be tested in this story and they will discover horrifying truths. Billy himself will discover the prices of leaving what he once loved behind.

2 thoughts on “‘Dawn of the Dwaxi’ – Introduction”