The Voyages of the Jarillion 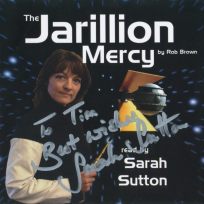 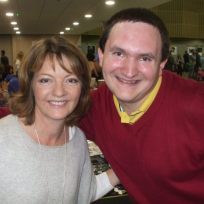 I enjoyed ‘The Jarillion Mercy’ very much!

This is an audiobook CD read by the lovely Sarah Sutton. I purchased this audiobook on Amazon in May 2013. I was looking for some non-‘Doctor Who’ related works with Sarah in them and I’m glad I found this CD on Amazon. It was such a pleasure to hear this and Sarah is so lovely when she reads.

‘The Jarillion Mercy’ is by Rob Brown and was especially written for Sarah Sutton. It’s taken in the form of a monologue about a starship captain called Asaria as she recollects her memories in a log entry about a tragic incident between two warring planets and how her ship the Jarillion was involved.

There is an element of ‘Star Trek’ featured in this story. Asaria’s log entry is about a conflict that she and her crew witnessed between the two planets Lomna Alpha and Lomna Gamma. She makes this recording to let out her anxiety about whether she made the right choice during these tragic events.

I’ve had the CD cover of ‘The Jarillion Mercy’ signed by Sarah Sutton at the ‘Collectormania 22’ event in Milton Keynes, November 2014. I’ve had the pleasure of seeing Sarah at conventions and she’s always pleased to see me. She remembers recording this audiobook which I was amazed and pleased about.

Sarah is my favourite actress, best known as Nyssa in ‘Doctor Who’. I’ve enjoyed watching and listening to Sarah in the TV and audio stories as Nyssa. I’ve also enjoyed Sarah’s other TV works like ‘The Moon Stallion’ and ‘Alice Through The Looking Glass’ and her audio works like ‘Wirrn: Race Memory’.

This audiobook was a delight to listen to. Sarah gets to read the story and is the centre of attention. Sarah has done plenty of audio dramas in ‘Doctor Who’ and has done a ‘Companion Chronicle’ called ‘The Darkening Eye’. I knew that I would enjoy this audiobook and it was engaging to listen to Sarah.

Sarah told me how reluctant she was to do this audiobook. Sarah’s not crazy about science-fiction and I can understand that, since she prefers doing the historical stories of ‘Doctor Who’ and the period-styled dramas. But she eventually agreed to do the audiobook, as she was persuaded by Rob Brown.

I’m not sure why Sarah was reluctant to do this audiobook initially and what it was like to work for Rob Brown. All I know, from my conversation with Sarah about this story, is that Rob had asked Sarah a number of times to do the audiobook and every time she said “No.” Eventually she gave in.

I guess Sarah is not used to doing full-length audiobooks as someone like Sophie Aldred is. She prefers interactive full-cast audio dramas compared to doing audiobooks on her own. I also think that Sarah prefers doing short stories like the Short Trip audios she has done for Big Finish recently.

I told Sarah that I found her voice beautiful when she’s reading and hearing her voice on audio was like music to my ears. Sarah and I laughed and joked about this. Sarah really appreciates my support and enthusiasm for her as a fan. I’m glad I’ve been able to please Sarah with my reassuring feedback.

I found the CD cover and the sleeve notes helpful to refer when listening to the story. I was able to keep note of the names of characters and planets and their backgrounds. I also liked Sarah Sutton’s mini-biography as it’s lovely and helpful for those who want to know who Sarah is as an actress.

I also like the profile pictures of Sarah Sutton as Asaria on the front and back of the CD cover. Sarah looks amazing as a starship captain and the pictures are very complimentary for her. I liked Sarah as Asaria holding a scanner and what looks like a wand (or that could be Sarah’s sonic screwdriver 😀 ).

I also liked the ‘track list’ on the sleeve notes as it helped me to keep ‘track’ (no pun intended) of what was going on in this story. The listings though aren’t correct as there are 9 tracks instead of 6. The chapters are quite lengthy but Sarah describes each scene between characters with flawless beauty.

I liked the theme music at the beginning and at the end of the story, as it’s quite catchy to listen to. There isn’t any sound design to add to the story, which is a shame as it would have helped the average listener to pay attention. But Sarah still managed to keep my interest as she was reading the story.

As this story is a monologue, there isn’t a lot of interacting dialogue between the characters as Sarah reads this from Asaria’s perspective. The story is very sci-fi and quite horrific as it focuses on Asaria’s thoughts and feelings in how she deals with situations and interacts with the other characters in this.

Much like Nyssa, Asaria gets to express her caring and compassionate side and she admits her annoyance whenever members of her crew don’t seem to care like she does. I like how she recollects her daddy when she was a little girl and she sometimes gets upset when she misses him.

The crew of the starship Jarillion are as follows. As well as Asaria, there’s also Webber; Vallendon; Saunders; Jen; Rassic and Phelparr. All the Jarillion crewmembers have varying personalities and characteristics.

Webber is Asaria’s second-in-command aboard the starship Jarillion. At the moment, he’s recovering from a nervous breakdown and was once a father before he lost his daughter. I like how Asaria relies on Webber as her confidante when she wants to hear advice from him and she seems fond of him.

Saunders is a bitter and belligerent female crewmember who is ex-military and doesn’t get on well with anyone. I like how Asaria reflects on how she gets frustrated with Saunders when she refuses to take orders from her. Asaria mentions she doesn’t like Saunders when she fails to make friends with her.

There’s also Vallendon, the Jarillion’s pilot; Jen, the Jarillion’s nurse and two alien crewmembers including Rassic (a crustacean) and Phelparr (a reptilian). There’s also Globe, the ship’s computer, who’s obsessed and wants to provoke a war. This understandably gets on Asaria and everybody else’s nerves.

The climax to this story is intense to listen to and is well-read by Sarah. The moment towards the end where Asaria sees the baby-like creature and she wants to mother it was very touching to hear.

‘The Jarillion Mercy’ was a very interesting story for Sarah to do. As I said before, she’s not really into science-fiction. I would like to hear Sarah read a period piece of storytelling some day in the style of Jane Austen and Agatha Christie. Whether she’ll get to do something like that, I don’t really know.

I was expecting that Sarah would have her own spin-off series as Asaria of the Jarillion, but it didn’t seem to happen like that, which is a shame. I would’ve liked to have heard more adventures of Asaria and the Jarillion so that I can enjoy listening to them, although I would prefer them to be full-cast audio dramas.

‘The Jarillion Mercy’ is a pleasurable and enjoyable audiobook to listen to. It was lovely to hear Sarah’s voice as she read the audiobook. I hope there are more audio CDs like this with Sarah out there. I need to find out about the radio plays that Sarah did in the 1970s and the 1980s and whether they’re available.

For Nyssa fans and certainly for Sarah Sutton fans, this is definitely an audiobook for you!

4 thoughts on “‘The Jarillion Mercy’ (Audio)”