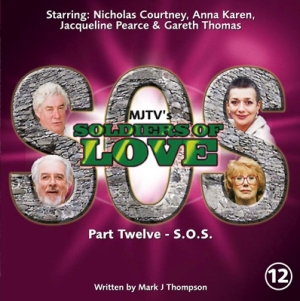 You Surrender To Me

Our eight current heroes spilt up into four groups in this ‘Soldiers of Love’ episode!

‘S.O.S.’ is the twelfth episode of the ‘Soldiers of Love’ CD series from MJTV Productions. This was the second of the last four episodes I’d not listened to when I originally heard the ‘SOL’ series back in 2014. And I must say, things are getting hyped up and tense as our characters face shocking discoveries.

For the most part, I have enjoyed the ‘Soldiers of Love’ series. It has been a mixed bag so far and again I miss Sarah Sutton as Colonel Franklyn by this point in the series. But most of these ‘SOL’ episodes have been engaging and entertaining throughout, even though the structure’s so laid back.

Another thing I’ve realised with regards to this sci-fi comedy series is that because these episodes are so lengthy, I’ve not been able to appreciate the humour in small amounts. Perhaps if ‘Soldiers of Love’ had episodes of half an hour length like a sitcom series would do, I would appreciate this more.

‘The Hitchhiker’s Guide to the Galaxy’ had episodes of half an hour length for me to appreciate the comedic aspects of the sci-fi world Douglas Adams had created. So why couldn’t Mark J. Thompson do the same thing with his ‘Soldiers of Love’ series? I know I’m being nitpicky here, but it’s intriguing.

‘S.O.S.’ is the second episode of the ‘Soldiers of Love’ series made in 2003, with the previous one, ‘Sting In The Tale’ being the first. This episode does features our current eight heroes off on a proper rescue mission, before they discover some shocking truths revealing what this series has been about.

This episode features a flashback in Cindy’s mind to the first episode ‘Genesis’ where he hear Sammie Winmill’s voice as Cindy and Colin Baker’s voice as Arran (then the Editor). It was nice to hear that flashback scene, as it helped to re-establish what went on before since the series started.

The eight current heroes of ‘Soldiers of Love’ at this point in the series are as follows: Turnidus, Gamak, Hywel, Frag, Cilla, Yztabub, Synder and Cindy. It would have been nice if there was a regular line-up of characters that featured throughout the series for us to enjoy and also to identify easily with.

The episode ‘S.O.S.’ begins with a narration by…Alistair Lock?! The same Alistair Lock who worked for Big Finish? Anyway, he gives the listener a recap of what’s been going on in the previous episode as well as reintroducing main characters like Turnidus, Hywel, Cilla, Gamak, Yztabub, Cindy…okay, stop!

There’s this introduction given at the beginning of the episode including a recap? (Pause) I believe this is given to the last two episodes of the series too! (Pause) Why wasn’t this provided for all the ‘SOL’ episodes since ‘Genesis’? It would have given the listener for consistency to follow and enjoy!

The episode follows up what occurred at the end of the previous episode where our heroes received an S.O.S. distress signal from Xoolian Major. Mrs. Blubber and Mydas remain on Earth, while Turnidus, Gamak, Hywel, Frag, Cilla, Yztabub, Synder and Cindy answer the S.O.S. Who is sending it?

There’s a list of characters on the back of the ‘S.O.S.’ CD, and a cast list inside the sleeve notes. This is something similar to the back of the ‘Earth Quake’ and the ‘Sting In The Tale’ CDs. There are no actors’ names given for the characters, but if you’ve followed the series so far you know who the actors are.

Nicholas Courtney returns as King Turnidus in the episode. The character description for Turnidus on the back of the ‘S.O.S.’ CD is the same as on the ‘Earth Quake’ and the ‘Sting In The Tale’ CDs. In this episode, I like how Turnidus braves through the dangers as he’s been through a lot during the series.

I enjoyed it when Turndius told a story about Voltarabia’s past to Synder and Cilla early on in the episode. On Xoolian Major, Turnidus joins Gamak as they search for a second S.O.S. signal coming far away from Arran’s castle. I did enjoy the camaraderie shared between Turnidus and Gamak in this.

There’s one point when Turnidus is about to reveal to Gamak he’s pregnant, before they get caught in a spider-trap. This trap is by Zalia, who Turnidus has a happy reunion with in the episode. They also reunite with one of the missing people they’re looking for, but I won’t reveal to you who this is.

Anna Karen returns as Cilla Hammond in the episode. The character description for Cilla is more or less the same, but worded differently as she’s described as ‘Arran’s grouchy sister from Tsuriel 3’ and that ‘Hywel is her uncle’. Despite being grouchy, Cilla has developed this sense of compassion.

I liked it when Cilla took an interest in Turnidus’ story about Voltarabia’s past and that she wasn’t making crude jokes about it. I suppose Cilla was keenly interested in Turnidus’ storytelling from ‘Exegesis’ and ‘Forced Entry’. Cilla gets to join Yztabub in the episode when answering a distress call.

Cilla and Yztabub do end up finding a space shuttle on Xoolian Major which incidentally doesn’t send out a distress call. They find four people inside which happen to be Madame Deephole, Major Grondlepuss, Violet Goodgrip and Crispin Caelys. They team up with each other pretty quickly here.

Jacqueline Pearce returns as Madame Deephole in this episode. Yeah, it’s been quite a while since we last heard from Madame D in the series. The last time we heard from her she was in a spaceship with the Major, Violet and Caelys heading for space in ‘Breaking Loose’. This is where they ended up.

There’s no character description given for Madame D on the back of the ‘S.O.S.’ CD, but she’s still the flirty, self-confident person in charge of her group of friends. Madame D and the others happily join Cilla and Yztabub to reunite with their friends as well as sort out Arran when heading for their castle.

Whilst the Major and Violet head off to The Nick of Time spaceship, Madame D and Caelys join Cilla and Yztabub to find out what’s happening at Arran’s castle. It’s interesting to point out some disturbing secrets are revealed by Cindy when finding out Arran’s plans that also involve Madame D.

Gareth Thomas returns as both Hywel Hammond and Arran in the episode. And at last, the two finally get to meet each other on Xoolian Major. It was so surreal to hear Gareth’s voices for Hywel and Arran at the same time. Thankfully Gareth’s Welsh accent for Hywel distinguishes from Arran’s.

The character description for Hywel on the back of the ‘S.O.S.’ CD is the same as on the ‘Earth Quake’ and the ‘Sting In The Tale’ CDs. Hywel gets to join Frag when they’re answering the distress call at Arran’s castle. Hywel expresses his shock and disapproval to Arran’s over the evil deeds he’s done.

But Arran seems to have become a changed man, as he’s asking for forgiveness and wants to redeem himself for all the wrong-doing he’s done. This is after he asks Hywel and Frag to join him in his castle. Hywel’s not convinced by Arran and to be honest I’m not either. What is that Arran up to?

Frag accompanies Hywel when they go searching for the S.O.S. at Arran’s castle. I like the interaction between Frag and Hywel in this episode. They meet Arran and at first they become suspicious of him. But very soon, Frag finds herself in love with Arran. Seriously, what is wrong with this woman?!

Mark J. Thompson returns as Galileo Gamak and Cindy in this episode. He also returns as Major Grondlepuss and Teddy Timpkin. The character description for Gamak is updated with some new info on it, whilst Cindy’s is the same on the back of the ‘Earth Quake’ and the ‘Sting In The Tale’ CDs.

Cindy is with Synder aboard The Nick of Time ship before they get attacked by Retsab/Maureen, head out into the cold of night on Xoolian Major and enter Arran’s castle to discover shocking truths. And what is with that look for Cindy, as played by Mark J. Thompson, on the back of the ‘S.O.S.’ CD?!

Nick Kirby returns as Helmut Synder. The character description for Synder on the back of the ‘S.O.S.’ CD has been updated. He’s ‘Germanic Space Patrol’, ‘2nd in command’ and ‘mutates into a huge wasp in moonlight’. Both he and Cindy work well together in this episode when combating against the odds.

As well as Retsab/Maureen, Alison Taffs returns as Violet Goodgrip, one of Madame D’s team. She also returns as Zalia, the spider creature that Turnidus met on Xoolian Major when he retold the story to his friends during ‘Exegeis’. Zalia shares what horrid things have occurred on Xoolian Major.

There’s also Niall Stuchfield who returns as Crispin Caelys. Caelys is described as being a muscle man, despite being slightly dim-witted. Niall Stuchfeld also returns as Dr. Proctor, who makes a shocking appearance when Violet and the Major return to discover him on board The Nick of Time spaceship.

For this CD, there is again only one song featured. This is ‘You Surrender To Me’, sung by Alison Taffs and Mark J. Thompson, with music and lyrics by Mark J. Thompson and an arrangement by Niall Stuchfield and Lawrence Oakley. I guess these songs are meant to provide a break for the listeners.

At the end of the episode, Turnidus and Gamak witness for themselves what’s become of the people of Xoolian Major, as they’ve been horribly treated. Gamak suspects that this is Arran’s doing and he’s determined to get vengeance on him. I wonder if this is really Arran’s doing in the next episode. 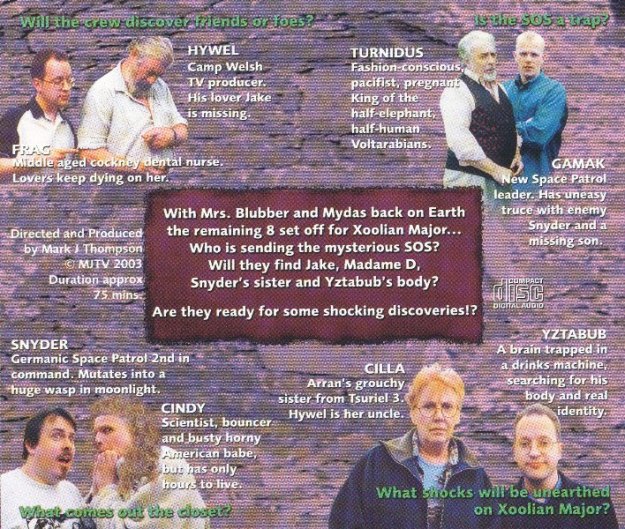 ‘S.O.S.’ has been another enjoyable episode in the ‘Soldiers of Love’ series that does well in focusing on characters and developing relationships between them. Having the current eight main heroes of the series divided into four groups of two does allow breath of space in terms of character development.

I’m wondering what’s going to become of these characters as we approach the last two episodes of the ‘SOL’ series. Will my expectations of the characters’ outcomes be met? Will more twisting revelations be made to get the listener more excited and tensed up? Well it should do, shouldn’t it?