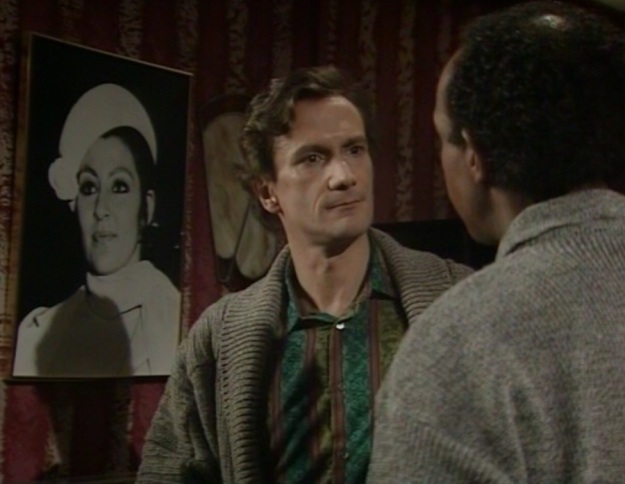 This is another very good ‘Star Cops’ episode in the TV series and is possibly my favourite so far. It has all of the Star Cops characters doing something and it features a crime mystery involving clones.

This is another episode by John Collee, who previously penned ‘In Warm Blood’. This is his second contribution to the ‘Star Cops’ TV series. Christopher Baker also returns to direct his fourth ‘Star Cops’ episode.

In this episode, a mystery occurs on the Earth’s Moonbase where somebody steals and ransoms embryos belonging to the Arabs. All of the Star Cops members have to investigate what’s going on.

It soon transpires that the culprit may be a world-famous pianist – Brian Gwaspari as James Bannerman. But how can it be James Bannerman when he was performing a concert the same night?

How can James Bannerman be in two places at the same time? This is what Nathan Spring intends to find out as he has an instinct that there’s more to this mystery and Bannerman isn’t the real culprit.

I wondered if I had seen Brian Gwaspari before and apparently I had. When I checked up his IMDb page, he appeared in an episode of ‘Ever Decreasing Circles’ and an episode of ‘The Brittas Empire’.

Brian Gwaspari plays two characters in this episode. He plays James Bannerman of course, but he also plays Albi, his clone. Albi turns out to be a ruthless murderer with a warped, clever intelligence.

It’s interesting how in the early scenes, Albi’s face was hidden before our Star Cops heroes find out he looks like James Bannerman. Bannerman is accused of murder, especially with the matching DNA scans.

Bannerman denies knowledge of what happened when the embryos were stolen and it takes a while for the Star Cops to figure out what’s going on. I like they solve the mystery layer by layer in this one.

Albi’s character is indeed pretty ruthless, especially when he somewhat murders the embryos for the Arab leader, Nitza Saul as Chamsya Assadi, to see. He’s clearly insane and hell-bent upon vengeance.

Chamsya Assadi is a difficult character for Nathan to contend with, especially when he tries to negotiate with her. It intensifies as Assadi blindly has Bannerman arrested, accusing him of murder.

I did like how Nathan’s determination to not have Bannerman take all the blame persists in the episode. He keeps on investigating as he comes up with wild theories that stun his Star Cops colleagues.

Thankfully, Nathan’s theories are proven correct and he gets the support he needs from people like David, Colin, Pal and Anna to solve the case once and for all. They all work as a team in this episode.

David has his story in keeping tabs on James Bannerman when he’s accused of committing the crime. There are tensions between David and Bannerman. It’s not helped when Assadi’s men enter.

I like how David watches over Anna who’s new to her Star Cops role and he’s kind to her, unlike Colin who berates her. David does argue with Colin in how he handles Anna as one of the Star Cops.

Pal has an interesting relationship with Nathan in this episode. The two seem to get on at times, especially in solving a crime together. But they have their moments when they bicker among each other.

This is especially when Nathan invites Pal to join in with negotiating with Assadi to speak to Bannerman once he’s a prisoner. When Nathan’s tactics fail, Pal uses the smooth touch to win Assadi over here.

I like the relationship played out between Colin and Anna in the episode. There’s friction between them at first, but they get on with each other, especially towards the episode’s dramatic conclusion.

I’m not sure what to make of Alexander Krivenko at this point. A lot of the time, Nathan and Alexander disagree with each other at times. Alexander even informs Assadi about Bannerman here.

I was surprised by how the episode concluded. As Pal and Nathan head back to Moonbase following their investigation, there seems to be a clone version of Nathan on board too. I mean…what is that?!

Definitely! ‘A Double Life’ is very good! It has merit with a compelling doppelganger mystery for the Star Cops team to solve and it has some very good character development between our main leads here.