‘THIS CASE TO BE OPENED IN A MILLION YEARS’ 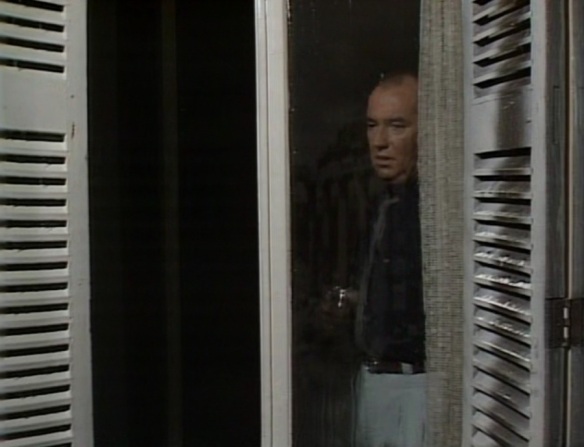 This is a ‘Star Cops’ episode with a difference as this time, it’s not by Chris Boucher. This episode is by Philip Martin. It is sadly his one of two writing contributions that managed to get transmitted on TV.

Philip wrote two TV stories for Colin Baker’s Doctor including ‘Vengeance on Varos’ and the ‘Mindwarp’ segment of ‘The Trial of a Time Lord’. He has also written some Big Finish ‘Doctor Who’ audios.

It would also be remiss of me not to mention that Philip also created ‘Gangsters’, another crime drama series. So his talents in crime drama are suited to Chris Boucher’s sci-fi cop show, ‘Star Cops’.

‘This Case To Be Opened In A Million Years’ was also directed by Graeme Harper, who previously directed ‘Trivial Games and Paranoid Pursuits’. Graeme has made an impact in the ‘Star Cops’ series.

This episode has Nathan Spring being ordered to take a holiday. This is because he hasn’t taken any leave since he was made commander of the Star Cops. Yikes, you get ‘ordered’ to take your annual leave?

Actually come to think of it, we’re only five episodes in and I’m not sure how much time has passed. I’m not certain Nathan Spring is justified to take a holiday since he hasn’t done the job for very long.

Anyway, Nathan takes a shuttle back to Earth where he meets a Spanish lady, Vikki Chambers as Lina Margello. After a bit of ‘flirtation’ between them, Lina suggests that Nathan has his holiday in Rome.

In the original script for this episode, apparently Philip Martin wanted Nathan to take a holiday to a sunken Venice. But budgetary limitations prevented this ever occurring and it was changed to Rome.

With that said, I’m rather shocked to hear that Venice gets sunken in the future. I hope this doesn’t happen as I would like to think Venice is alive and around by the time we’ve reached the year 2027.

Anyway, Nathan’s holiday in Rome doesn’t go according to plan. For one thing, it’s raining heavily every time he’s there. Wow, I would’ve thought Rome was a hot place, not going under a monsoon.

Nathan soon goes to visit some caverns where he’s supposed to meet Lina Margello who doesn’t show up. He’s then attacked by someone who’s now an assassin and used to work for the Star Cops.

A lot of this episode is implying that Nathan was being framed for something he didn’t do and that he was being set up. But I must admit, I did get rather lost during many aspects of the episode’s plot.

And that’s not just me. Patrick Stoddart of ‘The Sunday Times’ who watched this episode complained about not understanding the episode’s plot. I would need to see this episode again to understand it.

There’s also this subplot of David Theroux being left in charge of the Star Cops in Nathan’s absence as well as investigating the crash of a rocket carrying nuclear waste. David has a peculiar breakdown.

A nuclear alert on the Moonbase during the rocket crash revives chilling memories for David. Now my problem with this subplot is that it is not properly explained or developed enough in the episode.

David reveals his fears of radioactivity to Nathan towards the end of the episode, but it should’ve been established much earlier. We could have seen more scenes of psychological torment for David.

There are scenes between David and Colin Devis where the two don’t like each other. This was intriguing to see and it makes me wonder why David and Colin don’t seem to get on in the TV series.

There are also nice scenes between Colin and Pal Kenzy as well as an interesting story where Pal applies for a job with Susan Curnow as Marla Conderini. I liked it when Colin rescued Pal in this story.

At this point, I’m afraid Alexander Krivenko is not having a huge impact on me. He has some scenes with David in the episode, but he doesn’t seem to do much. I hope that will be rectified in later episodes.

‘This Case To Be Opened In A Million Years’ has the ingredients for a good crime-solving mystery episode. But I will have to watch this episode again since I was quite befuddled by some plot points.

The DVD special features for this episode are as follows. On Disc 2 of the 3-disc DVD set of ‘Star Cops’, there’s a commentary on ‘This Case To Be Opened In A Million Years’ by writer Philip Martin.