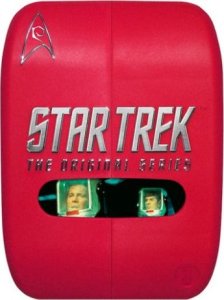 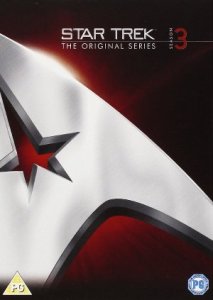 Season 3 of the original ‘Star Trek’ begins with a literally mind-boggling episode. In this one, Spock has his brain stolen by a beautiful woman in space. This is something very astonishing to think about.

Kirk is shocked and horrified that Spock gets his brain stolen. Determined, he sets the Enterprise on course to follow the ion trail of the woman’s ship; to rescue Spock and put his brain back in his body.

The Enterprise soon ends up in orbit around Sigma Draconis VI in the Sigma Draconis system. Kirk and his team beam down to the cold planet and to meet those responsible for stealing Spock’s brain.

I liked it when Uhura asks the very important question. “What would they want with Spock’s brain?” This question gets Kirk thinking to, as he soon wonders why that person who’d stolen it wants it for.

Eventually on Sigma Draconis VI, Kirk and his away team of Scotty, Chekov and some security officers get into a fight with some aggressive males. Kirk gets to stun one of them before the others run off.

The males are called the Morg and they seem primitive and simple-minded in nature. When Kirk questions the one he stunned, he’s no idea what he’s saying and he doesn’t know what a woman is.

Very soon, Bones beams down to the planet with Spock, whose body gets controlled by remote control as he wears a device on his head to be mechanically controlled. This was so disturbing to see.

Eventually, Kirk, Bones and Scotty with Spock find themselves going down in a lift to the underground where the ‘givers of pain and delight’ live. They soon set about to search Spock’s brain.

It was amusing and interesting when Kirk gets to communicate with Spock via his communicator, as Spock speaks as a disembodied brain. Spock lets his thoughts speak freely whilst he is disembodied.

Pretty soon, Kirk, Bones and Scotty with Spock get captured by ‘the others’, led by the woman who stole Spock’s brain. They’re soon interrogated and wear pain buckle devices put around their waists.

The woman who stole Spock’s brain is Marj Dusay as Kara. When Kirk, Bones and Scotty meet her with ‘the others’ on the planet, she too seems simple-minded and denies knowing what a ‘brain’ is.

It soon transpires that ‘the others’ are using Spock’s brain to be their ‘controller’ on the planet. This is something that they seem to have been doing a lot, as the old ‘controller’ died before Spock came.

With the use of the ‘Teacher’ machine, Bones gets to use it on himself in order to gain knowledge on how to restore Spock’s brain into his body. He soon gets the knowledge and says it is like ‘child play’.

I liked it when Bones gets to work on restoring Spock’s brain into his body and works at ‘warp speed’. But soon he starts to forget what’s learnt and starts to panic as he can’t seem to save Spock in time.

‘Spock’s Brain’ is a great opening episode to Season 3 of the original ‘Star Trek’. It’s possibly one of my favourites from Season 3 and it was interesting having Spock’s brain disembodied in this episode.

The DVD special features for this episode are as follows. On Disc 1 of both the original and re-mastered DVDs of ‘Star Trek: The Original Series – Season 3’, there is a preview trailer for this episode.

For ‘The Original Series’ was

For ‘The Original Series’ is