Klingons, Genesis and the Return of Spock 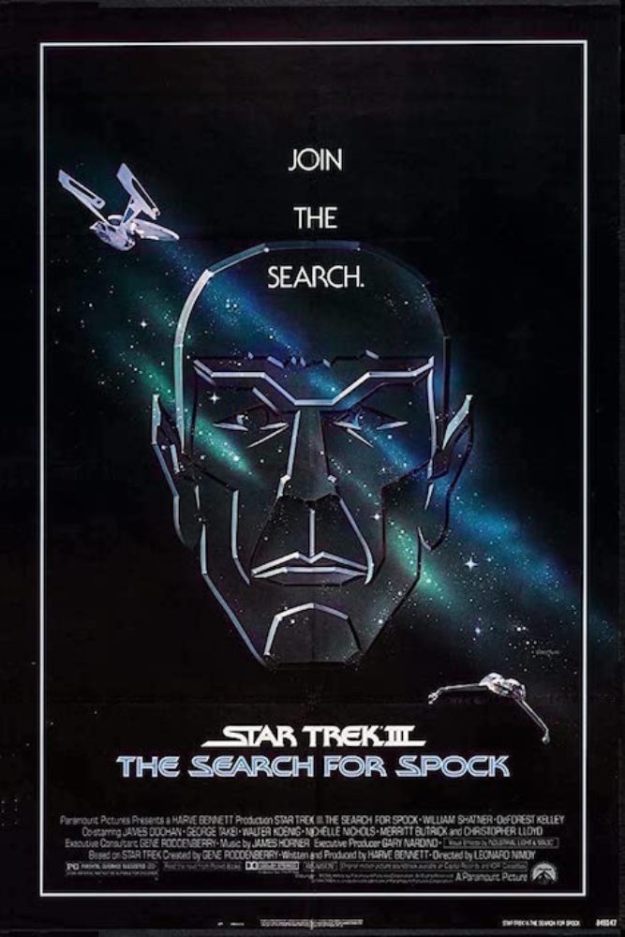 Spock is alive! Can Kirk find him?

‘Star Trek III: The Search For Spock’ is a follow-up to ‘Star Trek II: The Wrath of Khan’. After defeating Khan and the death of Spock in ‘Star Trek II’, it did seem like to be empty victories for Kirk. But it was not the end, as Spock was to be brought back to life in this film and the search for him was to begin.

This film was made in 1984 and written and produced by Harve Bennett. It was also directed by Leonard Nimoy himself, who makes his first directing contribution to the ‘Star Trek’ film franchise. Of course it gives the film a buzz as Leonard Nimoy directs a film that’s about him…or rather about Spock. 😀

My parents and I purchased ‘Star Trek III’ on a 2-disc special edition DVD after Christmas 2004. We’d seen ‘Star Trek II’ and ‘Star Trek: The Motion Picture’ in that order. So we were back on track to watch the ‘Star Trek’ movies in chronological order and looking forward to what would happen next.

The 2-disc special edition DVD has the following contents. The movie is on Disc 1 with the bonus features on Disc 2. Seeing ‘Star Trek III’ was a thrilling experience for me back in 2004, as I hoped that Kirk would find Spock alive and well. It should be noted Spock doesn’t appear much in this film.

There are also threads that happened in ‘Star Trek II’ continuing in this movie. This includes the Genesis planet that was born in ‘Star Trek II’ and the themes of that continue in this. ‘Star Trek III’ is the second part of a trilogy of ‘Star Trek’ movies which was unprecedented and not planned initially.

I like the journeys that carry on from ‘Star Trek II’ into ‘Star Trek III’, especially with Kirk who was upset at the loss of Spock and is now determined to search for his friend who may still be alive. There’s also a continuation of a thread with McCoy connected to his contact Spock before he died in ‘Star Trek II’.

In the story, Kirk finds McCoy driven insane following the death of Spock. McCoy (or Bones) seems to be acting strangely and being more like Spock. Eventually, Sarek, Spock’s father visits Kirk to give him a startling revelation. It transpires McCoy has Spock’s living essence from his latest contact with him.

It was interesting and impressive how Spock came back to life. Considering Spock is half Vulcan-half human, it shouldn’t be surprising that he doesn’t die like humans. Spock transferred his katra (his Vulcan spirit) into McCoy’s mind during a mind-meld, which you should have spotted in ‘Star Trek II’. 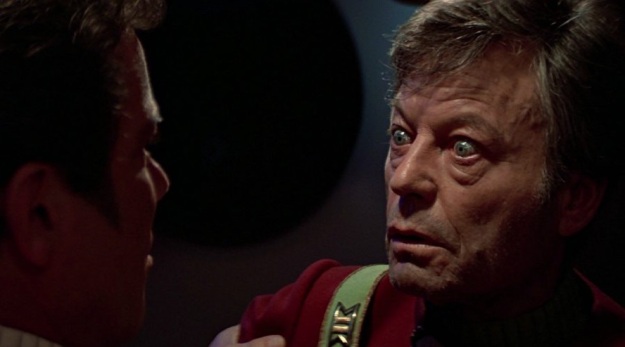 The transfer of Spock’s katra into McCoy has lasting repercussions of course. As Sarek informs Kirk, ‘one friend alive and one not, but both in pain’. This drives Kirk forward into finding a way to save both his friends, even if it means ruining his Starfleet career and never commanding a starship again.

There’s also the Genesis project that continues in this movie from ‘Star Trek II’. In ‘Star Trek II’, it was considered ideal to have the power of God to create new worlds. But as ‘Star Trek III’ depicts, this is not a good thing as the Genesis planet begins to rapidly accelerate and it gets destroyed and burned.

Another of the biggest highlights in ‘Star Trek III’ is of course the appearance of the Klingons, one of ‘Star Trek’s greatest enemies. The Klingons, led by Commander Kruge, want the Genesis planet for themselves. They’ll stop anything to get Genesis, even if it means committing murders on the way.

I really like Leonard Nimoy’s efforts as a director on this, his first, ‘Star Trek’ movie. Leonard clearly has an eye for directing and he knows to deliver effective action-packed sequences in outer-space and life-death situations on the Genesis planet. He obviously takes a back-seat and doesn’t play Spock a lot in this.

William Shatner delivers a superb performance as Admiral James T. Kirk in this movie. I’m not sure how uncomfortable he was about being directed by Leonard Nimoy. But he coped well and delivers the moralistic journey of Kirk on the search to find his friend Spock tremendously well in this movie.

Kirk also has to go through the sacrifices of two things he holds dears in his search to find Spock. First of all is the death of his son David by the Klingons. That moment when Kirk is devastated is well-performed by William Shatner as he’s so grieved that the Klingons have killed his son so mercilessly.

Secondly, in order to save his small crew of friends and himself from the Klingons, he can only do the one thing possible. Set the Enterprise to self-destruct. Thus we have the destruction of the first Enterprise ship, which was a shock for me to see as I couldn’t take in that Kirk would do a thing like that.

DeForest Kelley is equally great as Dr. ‘Bones’ McCoy in this movie. Bones starts off acting strangely like Spock at the beginning of the movie. But he manages to hold it together, especially when he, Kirk and the others voyage off on the Enterprise to the Genesis planet to find Spock and rescue him.

It was gratifying that Kirk has his Enterprise crewmembers and friends helping and joining him to find Spock, after his attempts to ask Starfleet for help go unfruitful. Scotty, Sulu, Uhura and Chekov help him out. Kirk warns them it’ll cost their Starfleet careers, but they seem willing to help him out.

James Doohan is great as Scotty in this movie. Scotty is denied repairing the Enterprise when he’s ordered to start his new job as engineer of the new Excelsior ship. But he manages to sabotage the Excelsior to give Kirk and everyone else time to escape out of Starfleet’s reach and head for Genesis.

George Takei is equally good as Mr. Sulu in this movie. He’s still performing helmsman duties for Kirk, especially when they go to search for Spock on Genesis. But he’s ever loyal and faithful. I found it a funny moment when Sulu tackles the brig security guard and he chides him, “Don’t call me, Tiny.”

Nichelle Nichols is equally wonderful as Uhura in this movie. She doesn’t get to go with Kirk and the others on the Enterprise to Genesis strangely, but I like it when she helps out. She distracts a young, enthusiastic ‘Mr. Adventure’ Starfleet lieutenant by forcing him to go into the closet using a phaser.

Walter Keonig is very good as Chekov in this movie. Sadly he doesn’t seem to get his job back as an executive first officer like he was in ‘Star Trek II’ as that seems to have been forgotten. But he gets to take over as acting science officer aboard the Enterprise, as well as help Kirk on his search for Spock.

Merritt Butrick returns as David Marcus, Kirk’s son in this movie. David is now conducting scientific studies on the new-born Genesis planet with Starfleet’s help. But it transpires that David may have made a mistake with the Genesis project and he gets a horrific end when he gets killed by a Klingon.

Robin Curtis guest stars as Lt. Saavik, the Vulcan Starfleet crewmember who made her first appearance in ‘Star Trek II’. I don’t know why Kirstie Alley who originally played Saavik didn’t return to play in ‘Star Trek III’. But Robin is pretty good as Saavik, as she delivers a new layer of depth to her.

There’s also Mark Lenard as Sarek, Spock’s father. It was good to see Sarek make an appearance in this ‘Star Trek’ movie and to have him visit Kirk about Spock. At first, Sarek believes Kirk has Spock’s katra. But when he realises McCoy has it and not Kirk, he tells Kirk what he has to do to save Spock.

There’s a nice cameo appearance of Grace Lee Whitney who played Janice Rand in the ‘Star Trek’ TV series. I wondered what had happened to Janice since her appearance in ‘Star Trek: The Motion Picture’ since she was a transporter chief in that. Also, I don’t care much for her red hair in this film.

Christopher Lloyd guest stars as Commander Kruge, the leader of the Klingons in this movie. For me, Chris Lloyd is well-known as Doc Brown in the ‘Back to the Future’ movie trilogy. I was so pleased to see him as a Klingon in this movie and he’s turned out to be one of the best ‘Star Trek’ villains ever. 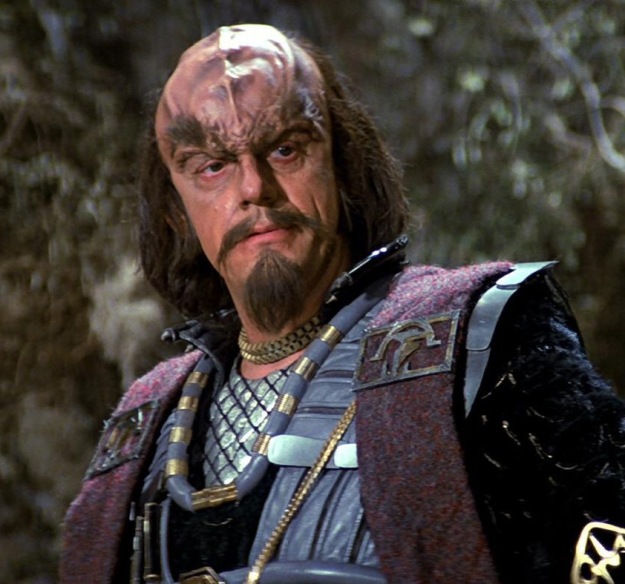 This movie also features the first appearance of the Klingon ship called the Bird of Prey. Birds of Prey are impressive and terrifying Klingon vessels compared to the standard Klingon ships before this. They have cloaking devices and can fire deadly firepower even when they’re battling the Enterprise.

‘Star Trek III’ is musically scored again by James Horner, who provided the music for ‘Star Trek II’. James Horner’s music is easily familiar from the beginning to the end of the movie, although he doesn’t have a chance to develop on his familiar themes and create news one for an effective score.

The movie ends with Spock brought by to life on Vulcan with McCoy involved in a dangerous telepathic ceremony. The closing moments where Leonard Nimoy reprises his role as Spock back to life and reuniting with his friends including James T. Kirk were very emotional and touching to watch.

The DVD special features on the 2-disc special edition are as follows. On Disc 1, there’s a commentary with director Leonard Nimoy, writer/producer Harve Bennett, director of photography Charles Cornell and actress Robin Curtis. There’s also a text commentary by Michael Okuda and Denise Okuda to enjoy on this.

The special features on the 2009 DVD of ‘Star Trek III: The Search For Spock’ are as follows. There’s a commentary with Ronald D. Moore and Michael Taylor; ‘Industrial Light & Magic: Visual Effects’; ‘Spock: The Early Years’; ‘Star Trek and the Science Fiction Museum and Hall of Fame’ and ‘Starfleet Academy: The Vulcan Katra Transfer’.

‘Star Trek III: The Search For Spock’ is a great sequel to ‘Star Trek II: The Wrath of Khan’. I was pleased that this film was all about Spock and that he was brought back to life after his tragic death in ‘Star Trek II’. It’s also well-directed by Leonard Nimoy who makes his mark as a ‘Star Trek’ director here.

But this wasn’t the end of the ‘Star Trek’ story. The film ends with a caption of ‘The Adventures Continues…’ That means more stories to be told with this Enterprise crew. But they would have to face the consequences of their actions as the Enterprise crew make the preparations for ‘The Voyage Home’.

2 thoughts on “‘Star Trek III: The Search For Spock’ (Film)”