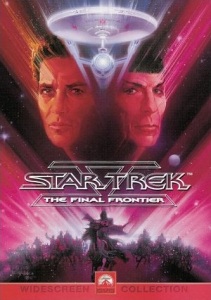 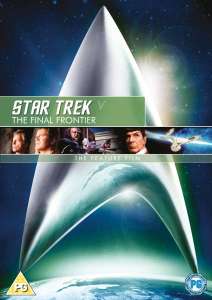 The Search For God

This is a pretty underrated ‘Star Trek’ movie, captained by William Shatner himself!

‘Star Trek V: The Final Frontier’ is the fifth film made in the ‘Star Trek’ movie series. Its standalone and features the Original Series cast of Kirk, Spock, Bones, Scotty, Sulu, Chekov and Uhura. Despite the many reviews, I don’t think ‘Star Trek V’ is as bad a film as many people seem to make it out to be.

This film was made in 1989 and again produced under the eye of Harve Bennett. This time however, the film was directed by William Shatner, after Leonard Nimoy had directed the previous two films. This is William Shatner’s first and sadly only contribution as a director on the ‘Star Trek’ movie series.

The 2-disc special edition DVD has the following contents. The movie is on Disc 1 with the bonus features on Disc 2. ‘Star Trek V’ is a pretty ambitious movie in the ‘Star Trek’ series. William Shatner wanted to put his mark as a director on ‘Star Trek’ and introduced some new elements in the series.

This film however deals with a very serious topic. The story has our main ‘Star Trek’ characters on the search for God. This happens when the Enterprise responds to a distress call on Nimbus III, only to be captured by a group of natives led by a renegade Vulcan called Sybok who wants the starship. 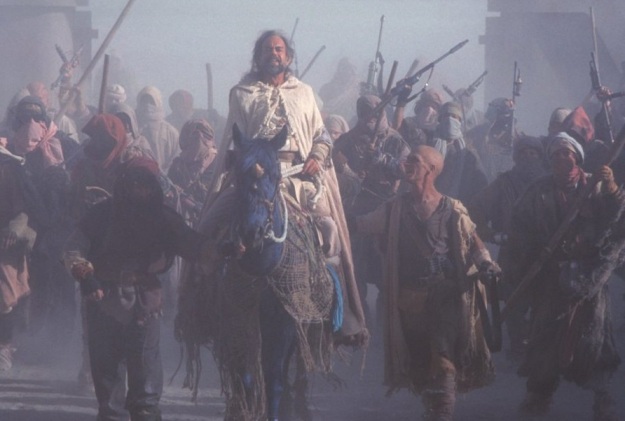 Now I find the concept of the ‘Star Trek’ team on the search for God very interesting. This is always a dodgy subject for a film crew to tackle, especially in how they depict God. Being a Christian myself, I know that a film’s version depiction of God isn’t going to be accurate and that’s true for ‘Star Trek V’.

But that in itself is rather the point, as this ‘Star Trek’ movie doesn’t show God to be real and it turns out to be a devil-like being instead. However, there is a reassuring message at the end of this ‘Star Trek’ movie that’s open-ended, as Kirk suggests that maybe God’s not out there but is in our hearts.

However, William Shatner as a director found himself under a lot of pressures by the studios and during the making of the movie. This ‘Star Trek’ movie didn’t turn out the way he wanted and it wasn’t the success that it was hoped to be, as some of it was pretty ambitious to achieve in the end.

But there are aspects of this ‘Star Trek’ movie that are very appealing. Firstly, William Shatner gets to illustrate his love of rock-climbing for Kirk during the movie and I like how the camaraderie is shared between Kirk, Spock and Bones when they’re camping at Yosemite National Park on their vacation.

There are also some really good action sequences in the movie, especially when Kirk’s away team attempt to rescue the hostages on Nimbus III and when there are battle scenes between the Enterprise and the Klingons in space. There are also good scenes of Kirk, Spock and Bones in action.

As I said before, ‘Star Trek V’ has a more serious tone compared to ‘Star Trek IV’ before this. But there are some good moments of humour shown amongst the regular cast of ‘Star Trek V’. This is especially true with Kirk, Spock and Bones and also between Scotty and Uhura and Sulu and Chekov.

To make the movie not so deep as it is with the search for God, the Klingons make an appearance in this movie. I like the Klingon stories in ‘Star Trek’ and it’s just as well as that the commander of the Klingon Bird of Prey, out of pure selfishness, is out to get Kirk so that he can be the greatest warrior.

William Shatner delivers a superb performance as Captain Kirk in this movie. It was interesting to see Kirk’s adventurous spirit stretched, even when he’s rock-climbing or commanding the Enterprise. He also shows his frustration when Spock refuses to shoot his half-brother Sybok when he’s ordered to.

Kirk sometimes loses faith in Spock, especially when concerning Sybok. He doesn’t like it when Sybok manages to ‘take control’ of his starship crew and is disbelieving when Sybok reveals his intentions to find God. Kirk is the one who questions ‘God’ first when he asks him on why he wants a starship.

Leonard Nimoy is equally great as Mr. Spock in this movie. Although not the director of this movie, this film also introduces a new character edge for Spock’s character when it’s revealed he has a half-brother called Sybok. I was sceptical about this idea, but it did turn out to be interesting in the end.

Spock is also still on the recovery stages from his resurrection in the previous ‘Star Trek’ films. It was great to see him camping with Kirk and Bones on their vacation and funny when he doesn’t know the song ‘Row, Row, Row Your Boat’. Spock also gets fly in his own rocket-boots and save Kirk’s life.

DeForest Kelley is equally great as Dr. Leonard ‘Bones’ McCoy in this movie. I liked it when Bones shows concern for his friends Kirk and Spock, even though they do get on his nerves. Bones is the one who defends Spock for not shooting his brother and tells Kirk off when the trio are imprisoned.

James Doohan returns as Scotty in this movie. I enjoyed Scotty’s appearance in this ‘Star Trek’ as he sometimes provides the comic relief. Scotty is annoyed when the new Enterprise-A isn’t working properly and he has to fix it. I did like it when Scotty helps Kirk, Spock and Bones during a ‘jail-break’.

Nichelle Nichols also returns as Uhura in this movie. I was rather shocked to see Uhura and Scotty forming a semi-romance with each other, as they seemed to be acting like a married couple and it was a little out-of-character. I liked it when Uhura gets to show off her singing skills in this movie.

George Takei is very good as Sulu in this movie. I liked it when Sulu and Chekov have that moment on vacation when they seem to be lost as the two of them make a good double-act. Sulu also gets to pilot a shuttle back to the Enterprise under dangerous circumstance, but Kirk has some faith in him.

Walter Keonig is equally good as Chekov in this movie. Chekov gets to demonstrate his skills as a commander in this movie. Although not an executive officer as in ‘Star Trek II’, Chekov gets to be ‘acting captain’ of the Enterprise as he negotiates with Sybok and commands the ship to go to warp.

Laurence Luckinbill guest stars as Sybok, Spock’s half-brother in this movie. Sybok is interesting as a character in ‘Star Trek’, since he’s a Vulcan with emotions and has rejected the Vulcan ways of logic. It was interesting to see Spock and Sybok interact with other, and how Sybok conducts his schemes.

David Warner guest stars as St John Talbot, a Federation ambassador on Nimbus III that becomes a hostage with Cynthia Gouw as Caithlin Dar, a Romulan and Charles Cooper as Korrd, a Klingon. I’ve met David Warner at conventions and it is amazing to think that I saw him first in a ‘Star Trek’ movie.

There’s also Todd Bryant as Captain Klaa, the Klingon commander of the Bird of Prey chasing Kirk with Spice Williams as Vixis, his Klingon ‘girlfriend’. It was interesting and fun to see the two Klingons with their ship in pursuit of Kirk for personal glory, although they both spoke a lot of Klingon dialect.

As I said before, the film was pretty ambitious for William Shatner to make. The movie’s ending wasn’t quite what he’d hoped for, as he intended to end the film with Kirk fighting a rock monster called Rockman on the ‘God’ planet. But in the end, it was abandoned as the Rockman monster became very unconvincing.

It’s a shame that William Shatner didn’t achieve all he wanted to do as a director on this ‘Star Trek’ movie, especially with the rock monster ending. But the end of the movie isn’t all that bad, as Kirk manages to survive to be saved by Spock and the ‘Star Trek’ characters gather aboard the Enterprise.

The DVD special features on the 2-disc special edition are as follows. On Disc 1, there’s a commentary with William Shatner and his daughter Liz Shatner, author of the book ‘Captain’s Log: William Shatner’s Personal Account of the Making of ‘Star Trek V: The Final Frontier’. There’s also a text commentary by Michael and Denise Okuda, co-authors of ‘The Star Trek Enyclopedia’ to enjoy. 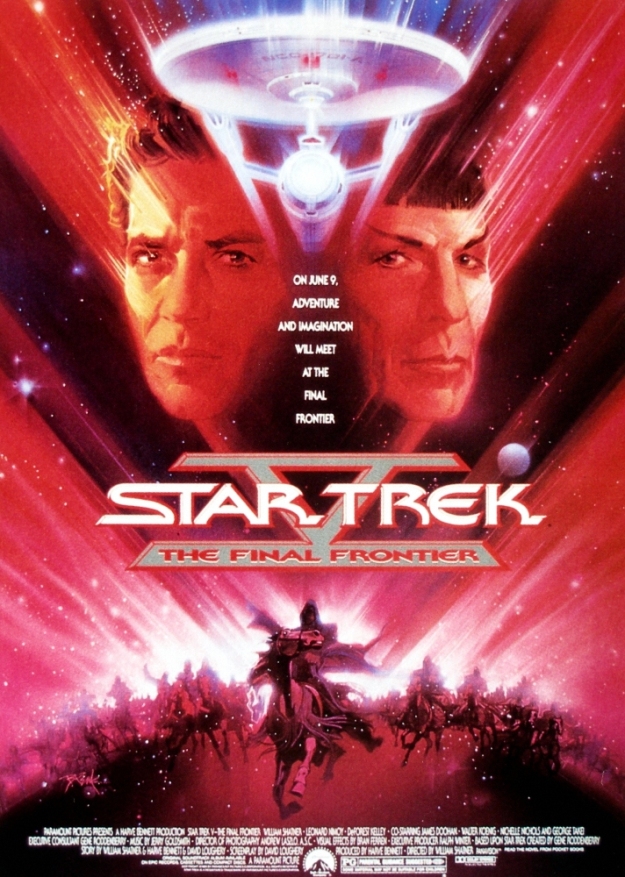 ‘Star Trek V: The Final Fronter’ is a pretty underrated film that’s well-directed by William Shatner. It’s not the greatest ‘Star Trek’ film I’ve seen, but it’s not so bad as people make it out to be. I found it an interesting film with the search for God and loved the characters of Kirk, Spock and Bones in this.

Thankfully, ‘The Original Series’ cast were given one more outing to appear in a ‘Star Trek’ movie on the big screen. But the next adventure for the original starship Enterprise crew would have them put to the test and take them into unknown territory, as they set forth to the future in ‘The Undiscovered Country’.