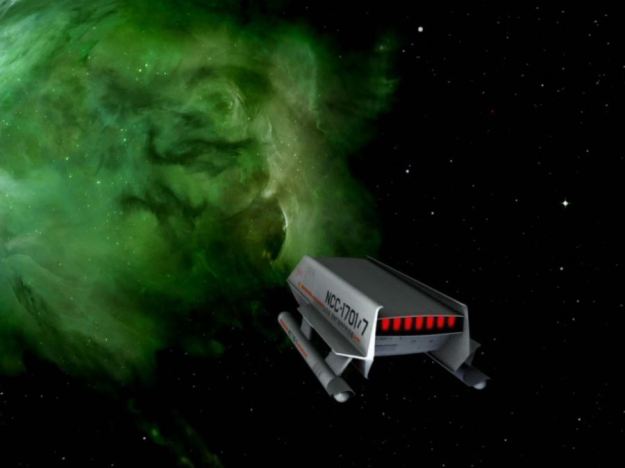 In this episode, seven Enterprise crewmembers travel in a shuttle-craft called the Galileo. They then crash land onto a planet where ape-like creatures live and they must find a way to get off this planet.

This is a very thrilling and engaging episode to watch from ‘Star Trek’. The Galileo seven try to survive and get their shuttle off the ground of this alien planet, so they can return to the Enterprise.

Not everyone survives in this episode, as the Galileo seven ends up on the most hostile world where fierce ape-like creatures live. Only five out of the seven get to live and return to the Enterprise ship.

This is also an episode where Spock gets to take command of the Galileo seven. Spock is not used to taking command, but when he’s given a chance he approaches it logically and efficiently as possible.

There are times when the human members of the Galileo seven are being unfair to Spock and question his authority. This is due to the fact that he’s not driven by emotion as the rest of them are.

Spock also tends to show moments of being snappy and impatient with the rest of the Galileo team. This happens when they’re under pressure and he needs to make sharp decisions when required to.

I liked it when Spock is relying on Scotty to get them off the ground as they eventually use their phasers as a fuel soul. There are also good moments of banter between Spock and Bones in this too.

The ape-like creatures that attack the Galileo seven are ferocious and merciless non-stop. There’s no reason why they want to kill the Galileo members one by one and we don’t actually see their faces.

The weapons that the ape-like creatures use on the Galileo seven include sharp gigantic spears and rocks. Gaetano and Latimer are the only two of the seven who tragically get killed by the creatures.

Meanwhile aboard the Enterprise, Captain Kirk and the crew are conducting searches to find their missing crew. It’s not so easy, when Kirk is under pressure by John Crawford as Commissioner Farris.

The Enterprise is meant to deliver emergency medical supplies to a human colony. Farris keeps reminding Kirk that he needs to get those supplies delivered as soon as possible despite the search.

Very soon, the Galileo manages to get off ground and into space with Spock, Bones, Scotty, Boma and Yeoman Mears aboard. But they’re on a limited fuel and power supply and can’t last for so long.

I liked that last scene where Kirk questions Spock about his rash decision at the end of the episode. Spock insists that he was acting logically and everyone else including Kirk laugh the whole thing off.

‘The Galileo Seven’ is a great episode to watch from the ‘Star Trek’ series. It’s tense, gripping and full of atmosphere and it also shows an interesting side to Spock’s character when he’s given command.

The DVD special features for this episode are as follows. On Disc 4 of both the original and re-mastered DVDs of ‘Star Trek: The Original Series – Season 1’, there is a preview trailer for this episode.