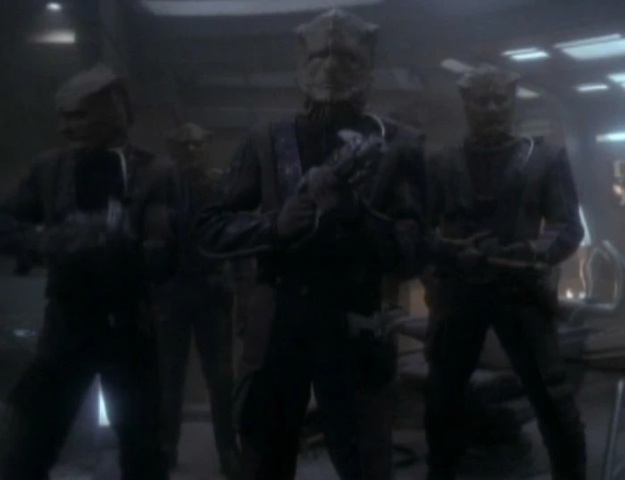 The Dominion was mentioned a few times in Season 2 of ‘DS9’. But it was ‘The Jem’Hadar’, the Season 2 finale of the show that the Federation and Starfleet took the Dominion seriously. It was so thrilling to see the opening two-part tale of the season and how our DS9 team tackled the Dominion.

Season 3 of ‘DS9’ begins with ‘The Search’. This two-parter has our DS9 team debating on what to do about the Dominion and how to defend the station. It’s when Sisko returns to DS9 with a Federation starship called the Defiant. This starship is small in size; is heavily-armed and has this cloaking device.

Incidentally, at the time of Season 3 of ‘DS9’, Season 7 of ‘TNG’ had just finished. The ‘TNG’ crew were soon about to have their own movie ‘Star Trek: Generations’. Hence the redesigned comm badges on our ‘DS9’ Starfleet heroes. ‘Star Trek: Voyager’ would soon begin their series with Season 1.

Anyway, back to ‘The Search’. In ‘Part I’, Sisko tells the DS9 crew about their new warship to defend themselves against the Dominion. The ship had originally been designed to fight against the Borg, but was considered faulty at the time. The Defiant has now been refitted with a new cloaking device.

Sisko tells the ‘DS9’ crew that their mission is go into the Gamma Quadrant to try and find the leaders of the Dominion – the Founders. They have to tell them the Federation doesn’t represent a threat to the Dominion and they are travelling in the Defiant just in case the Founders don’t adhere.

The first episode of this two part features two new characters. There’s Martha Hackett as Romulan Sub-Commander T’Rul. She’s coming along aboard the Defiant to supervise the proper use of the cloaking device aboard it. Martha Hackett would later go on to play Seska in the ‘Voyager’ TV series.

There’s also Kenneth Marshall as Lt. Commander Michael Eddington. He’s from Starfleet Security. Odo suspects that Eddington has come to replace him as chief of security aboard DS9. This follows Starfleet not being happy with Odo’s services on DS9 and Odo bitterly offers his resignation to Sisko.

Whilst this two-parter is about the Dominion, it portrays Odo in a significant way, especially in how he spends his time aboard DS9. Sisko isn’t happy about Starfleet replacing Odo as chief of security on DS9, but tells Kira that Odo has to ‘want to stay’ on board the station in order to maintain his position.

Very soon, the DS9 team are off to find the Founders of the Dominion in the Gamma Quadrant with the Defiant. This includes Sisko, Kira, Bashir, O’Brien and Dax. Quark also comes along on behalf of the Grand Nagus to make contact with the Karemma to find information on where the Founders are.

Odo also joins the ride after being persuaded by Kira and possibly the provisional government of Bajor. Once in the Gamma Quadrant, the Defiant manages to successfully avoid detection by a patrol of Jem’Hadar ships in space. But the Jem’Hadar could have detected the Defiant ship at warp speed.

After that, they meet up with John Fleck as Ornithar, one of the Karemma. Quark makes negotiations with him in order to find the Founders of the Dominion. Whilst that goes on, Odo begins to have a fascination with the Omarion Nebula, as if being drawn to it. It also causes him to be bad-tempered.

Eventually, O’Brien and Dax get caught on an away mission to an undefended communications relay whilst they try to find information about the Founders. The Defiant receive co-ordinates on the Founders’ location, but have to leave O’Brien and Dax behind when three Jem’Hadar ships intercept.

It isn’t long before the Defiant gets heavily attacked by three Jem’Hadar ships that manage to detect them in space. The dog-fight in space between the Defiant and the Jem’Hadar is pretty intense. This is especially as the Jem’Hadar beam aboard and beat the living daylights out of many DS9 members.

Odo and Kira manage to escape during the Jem’Hadar attack on the Defiant. Odo rescues Kira as they escape in a small shuttlecraft and head for an M-class planet within the Omarion Nebula. Once they land there, they find a lake. Up from it; rise a group of shapeshifters. They welcome Odo home.

That ends ‘Part I’. In ‘Part II’, Odo is astonished to find people who look just like him. They’re led by Salome Jens as the Female Changeling. The planet in the Omarion Nebula happens to be Odo’s homeworld. Odo has so many questions about what happened to him before he left his homeworld.

The Female Changeling encourages Odo to begin the process of learning who he is as they begin the bond all shapeshifters share called the Great Link. Odo is happy to be reunited with his people but there’s distrust between Kira and the shapeshifters. They don’t like Kira as she happens to be a ‘solid’.

Meanwhile with Sisko, things get interesting when he and Bashir are travelling back to DS9 after the attack by the Jem’Hadar attack on the Defiant. They soon reunite with O’Brien and Dax who’ve survived and have found the Founders. The Federation is now negotiating a peace with the Dominion.

The second episode features Natalija Nogulich as Admiral Nechayev. Oh no! Not her again! She was recently in the two-part ‘DS9’ story ‘The Maquis’. Admiral Nechayev is part of the peace talks between the Federation and the Dominion. And if you think there’s trouble with her, you’re correct.

There’s also Dennis Christopher as Borath, a Vorta who claims to be a Founder. Sisko meets him and Borath attempts to reassure him that an alliance between the Federation and the Dominion will be beneficial to both peoples. Sisko isn’t sure about Borath, having met Eris in ‘The Jem’Hadar’ episode.

‘Part II’ also features Andrew J. Robinson as Garak. It was interesting to see the scenes with Garak in the second episode of this two-parter. Garak shares his concerns with people like Bashir and Sisko on how the negotiations are going between the Federation and the Dominion. It is quite odd since…

Things don’t go well the Jem’Hadar now seemingly aboard DS9. For one thing, the Romulans have been excluded from the peace talks. There’s also a situation where a Jem’Hadar bullies and beats up O’Brien in Quark’s. Jadzia Dax also tells Sisko that she has been transferred to the Lexington starship.

With all this going on, Sisko angrily confronts Nechayev and Borath about what’s going on. He’s told by them that the Dominion will soon be taking over the DS9 space station and the Federation will leave Bajoran space. This leaves Sisko very unhappy as it’s unlike the Federation to behave this way.

Back on the shapeshifters’ homeworld, Kira tries to make contact with Sisko and the others but is unable to. Whilst Odo struggles in his lessons with shapeshifting by the Female Changeling, Kira soon finds the interference is caused by a hidden power behind a door underground. Kira is very confused.

She wonders why the shapeshifters would want a door for in the first place. Once meeting up with Odo, who seems to be getting the hang of his new shapeshifting powers and happy to stay on the planet with his people, Kira asks him to help her learn more of the mystery of the underground door.

Back on DS9, after Jem’Hadar soldiers shoot Romulan officer T’Rul in cold blood and Sisko gets arrested, Bashir; Dax; O’Brien and Garak rescue Sisko before they escape in a runabout on a suicide mission. Garak gets killed in the process whilst Sisko; Dax; Bashir and O’Brien collapse the wormhole.

On the shapeshifters’ homeworld, Odo and Kira open the door to find Jem’Hadar soldiers. They’re soon taken to an interrogation room where Sisko and the Defiant crew have been experiencing a virtual reality simulation by Borath. So…all that had happened in ‘Part II’ with Sisko…did not happen.

There weren’t any peace talks between the Federation and the Dominion on DS9 and T’Rul and Garak didn’t get killed. It’s then revealed that the shapeshifters are the Dominion – in that, they’re the Founders. Odo and Kira are shocked by this, before Odo asks for the Defiant crew to be set free.

This two-parter in ‘DS9’ is a significance one in the Dominion arc as well as Odo’s character journey. It inspired me with creating the Dwaxi for my ‘Doctor Who’ stories with the Fifth Doctor. ‘The Search’ is an excellent two-parter and it paves the way for more exciting stories in the ‘DS9’ series. 🙂