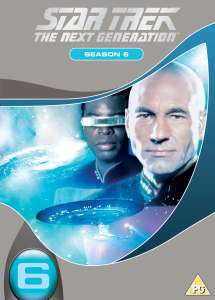 This is a pretty good two-parter in the ‘Star Trek: TNG’ series! The first episode of ‘Time’s Arrow’ is the season finale for Season 5 whilst the second episode is the season opener for Season 6. By this point, I’ve become used to ‘Star Trek’ seasons ending on cliff-hangers. It’s true with the ‘TNG’ series.

In ‘Part I’, the Enterprise gets recalled to Earth on a mission to find aliens on the planet from 500 years ago. There’s evidence of relics from the 19th century contained in a cavern near Starfleet HQ in San Francisco. One of these relics is the severed head of Data. The Enterprise crew are so shocked.

Data however doesn’t seem to be too bothered by his severed head being found in a cavern in San Francisco. He actually seems fascinated by it. It’s interesting how Data gets reactions from others like Picard, Riker and Geordi who are obviously concerned that at some point their friend will perish.

I found it a shock to see Data’s severed with his eyes wide open. I wondered what was going to happen in this two-parter and whether Data would actually die in the ‘TNG’ series. The two-parter made it all the more engaging for that, especially when Data travels back in time to the 19th century.

Very soon, the Enterprise crew find evidence pointing to a race of shape-shifters and cellular fossils from the planet Devidia II. The Enterprises goes to Devidia II in order to find out what’s going on and see if they can progress in this investigation further. They find a temporal disturbance on the planet.

When an Enterprise away team goes down to investigate, Deanna Troi senses the presence of humans suffering in a cavern similar to the one where Data’s head was found in San Francisco. However there aren’t any life-forms visible on the planet since they seem to be slightly out of phase.

Data suggests that his android body’s phase discriminator can be used to him to see the aliens in their out of phase state with time. Beforehand, Picard had been trying to prevent Data going to the planet Devidia II. But he reluctantly allows Data to go down in order to get more on what’s going on.

Once on the planet, Data soon gets himself out of phase to see the aliens on Devidia II. He describes what the aliens are like to the Enterprise crew via his communicator. Soon, Data finds himself being drawn into a time portal before he soon finds him on Earth in San Francisco in the late 19th century.

In 19th century San Francisco, Data tries to blend into his surrounding by acquiring money. This he achieves by winning a game of poker, which he’s had considerable practice during the ‘TNG’ series. He gains some 19th century garb and takes residence in a local hotel to act as his base of operations.

Due to Data’s pale complexion, he passes this off by saying he’s a Frenchmen as well as an inventor. He also befriends the bellhop at the hotel who happens to be Michael Aron as Jack London. I didn’t realise, but apparently Jack London becomes a novelist, a journalist and a social activist in the future.

Data builds a detector to find the time-travelling aliens, using 19th century technology. He also discovers a photo of Guinan in a newspaper photo. But this isn’t the Guinan that Data knows as a bartender in Ten Forward on the Enterprise. This is a younger Guinan before she’s on the Enterprise.

I didn’t understand it at the time when watching the story, even though Guinan doesn’t seem to know Data when they first met in the 19th century. But thinking about it, it does make sense and it’s rather clever, considering that she would’ve been there in the past due to having her long life-span.

Whoopi Goldberg is great to watch in this story and it’s nice to see two versions of her character – one in the 19th century and one in the 24th. Apparently Guinan is attending a reception of some kind, hence why Data was able to see a newspaper photo of her. He goes over to meet Gunian there.

Mark Twain also has a love for science and technology as he wrote a science-fiction novel called ‘A Connecticut Yankee in King’s Arthur’s Court’. This ‘Star Trek’ two-parter could see Mark Twain getting his inspiration and ideas of writing fictional novels from meeting the Enterprise crew. Neat! 🙂

At the reception, Data tries to see Guinan in order to ask her help. He initially believed she followed him back in time. This turns out not to be the case. But apparently Guinan is willing to help Data despite not meeting him yet. This attracts Samuel Clemens’ attention who follows Guinan and Data.

Back on the Enterprise, the crew build a similar phase discriminator in order to gain access to the aliens’ out-of-phase world and go back in time to rescue Data. The 24th century Guinan urges Picard to go with the away team since it seems if he doesn’t then the two will never meet each other at all.

Picard soon joins the away team that includes Riker, Geordi, Beverly and Deanna. Worf remains on board the Enterprise whilst the others are away. Shame Worf couldn’t come, but there you are. Very soon, our heroes are out-of-phase. They soon enter the time portal, ending ‘Part I’ on a cliff-hanger.

In ‘Part II’, the Enterprise away team are in the 19th century – the year happens to be 1893 by the way. They try to find a way to stop the aliens and also find Data. By the way, I like how the ‘TNG’ cast get a chance to dress up in this two-parter when they go back in time to the 19th century. Such fun!

The Enterprise away team soon find Data and they gather their findings on the current situation. Picard also soon gets to meet the younger version of Guinan. I like how the two meet. Picard knows Guinan already, yet she hasn’t met him before. This seems a wonderful scene to watch in the story.

Using Data’s device, the Enterprise heroes with Guinans find where the alien shapeshifters have been coming from in the cavern near San Francisco. Samuel Clemens catches up with them, who believes that Data, Guinan and the others are attempting to invade the Earth with their technology.

Very soon, the alien shapeshifters in the form of a 19th century man and woman turn up and a struggle ensues. Data soon gets decapitated with his head blowing off after touching the alien’s mode of time-travel, which is a cane in the shape of a snake. Trouble ensues as a time portal opens.

Riker, Beverly, Deanna and Geordi go through the portal to return to the 24th century where Data’s headless body is whilst Picard remains with the younger Guinan who was injured in the ensuing struggle. Clemens also goes through the portal too. Data’s detached head remains inside the cavern.

It seems that the alien shapeshifters have been taking advantage of a cholera outbreak in 19th century San Francisco by draining the life-form from humans. This is so that they can give energy to the rest of their kind. Picard is warned the 19th century will devastate if the alien base is destroyed.

In the 24th century, the Enterprise away team take Data’s body back along with the time-travel cane he acquired during the struggle with the aliens. Geordi tries to restore Data’s head to his body, using the one acquired in the 24th century when it was found in the San Francisco cavern 500 years later.

Geordi isn’t able to restore Data with the head found in the San Francisco cavern 500 years later. This is because Picard placed a binary message into Data’s static memory using iron fillings in order to leave instructions for his crew in the future not to destroy the alien base. This message works out.

Once Geordi removes the iron filings from Data’s head, he restores his head to his body. Data is back to life and he tells Geordi the message sent to him by Picard many years ago. This resolution to how they get Data’s head back on his body after he was presumed dead earlier on is impressively clever.

To make a long story short, Data and Geordi find a way of putting the Enterprise’s torpedoes in phase with the alien habitat to avoid any damage to Earth’s 19th century timeline. Clemens gets sent back in time to save Picard, whilst Picard goes back to the 24th century reuniting with everyone else.

‘Time’s Arrow’ is a superb two-parter in the ‘TNG’ series. I enjoyed it when I first saw it on DVD back in 2005. I found it cleverly written and enjoyed how Data’s life was saved when he didn’t turn out to be dead at all. It was also intriguing to see how Samuel Clemens/Mark Twain got involved in the tale.

I don’t think ‘Time’s Arrow’ is as good a two-parter season finale/season opener compared to ‘The Best of Both Worlds’, but it certainly is better than ‘Redemption’. I also like how this two-parter makes good use of Data’s character and highlights the very special relationship between Picard and Guinan.

On Disc 7 of the ‘Star Trek: The Next Generation – Season 5’ DVD, there are seven Mission Logs, which are behind-the-scenes documentaries on the making of Season 5 of ‘TNG’. These include ‘Mission Overview’, ‘Departmental Briefing: Production’, ‘Departmental Briefing: Visual Effects’, ‘Memorable Missions’, ‘Intergalactic Guest Stars’, ‘Alien Speak’ and ‘A Tribute To Gene Roddenberry’.