Zero X and the Thunderbirds 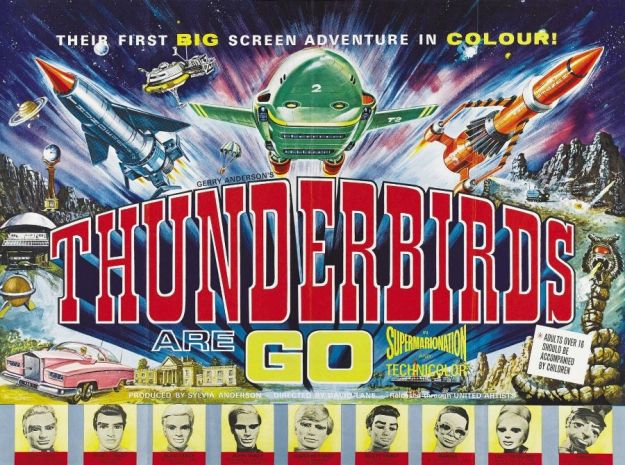 ‘Thunderbirds Are Go’ is my favourite out of the two ‘Thunderbirds’ movies made in the 1960s! 🙂

When I was a kid back in the 1990s, I had such a thrill when my parents purchased the VHS collection of two ‘Thunderbirds’ movies in one – ‘Thunderbirds Are Go’ and ‘Thunderbird 6’. I clearly remember watching those movies as a kid as it were yesterday. They gave me such happy memories.

Many years later in the year 2001 and with our new family DVD player, I purchased the two ‘Thunderbirds’ movies separately on individual DVDs. I enjoyed re-watching the classic films over again. It’s also good to check them out again as I review them for my ‘Bradley’s Basement’ blog in 2021. 🙂

Like I said, ‘Thunderbirds Are Go’ is my favourite out of the two movies made from the classic TV series from 1965 to 1966. It was such a thrilling and an extraordinary experience watching a ‘Thunderbirds’ movie that was longer than the usual ‘Thunderbirds’ episode I’d seen in the TV series.

I mostly love everything about the ‘Thunderbirds Are Go’ film from the impressive Zero X to the dream-like sequence of the Swinging Star with Alan and Lady Penelope. I know the film isn’t that warmly received by other people, but I feel this is a ‘Thunderbirds’ film that you don’t want to miss out on. 🙂

The film’s story is about the super-powered space vehicle called the Zero X and its crew on a special mission to the planet Mars. But after a sabotage attempt on the Zero X’s first attempt to fly out of Earth’s atmosphere, International Rescue are called upon to help out with the security measures. 😀

They have to see it that the saboteur or saboteurs are stopped when the Zero X makes second attempt to fly out into space. Can the Thunderbirds save the day and will the Zero X be successful in its mission to Mars? Can the International Rescue team also help the Zero X on its re-entry to Earth?

The movie does seem to start off rather slowly at first. The familiar characters of Scott, Virgil, Alan and Gordon on Tracy Island don’t appear until 10 to 12 minutes of the movie. The first part of the film is all about the Zero X and its first attempt to fly to Mars before getting sabotaged by the Hood.

I love the Zero X space vehicle in the movie. Zero X is made up of five parts. It has a main body, two lifting bodies (Lifting Body 1 and Lifting Body 2); the Martian Excursion Vehicle (MEV) and a nose cone (which is to protect the Zero X crew from sun exposure once they’re going up into outer space).

Virgil in Thunderbird 2 also escorts Zero X off on the first part of its journey. Alan pilots Thunderbird 3 to orbit the Earth and establish Zero X’s journey to Mars. Gordon sadly got left behind. He could have assisted in Thunderbird 4 to save the Zero X crew if their escape unit ended up in the sea again.

Lady Penelope and Parker also play a part in seeing to it that Zero X’s launch is successful. Once in America, they drive in FAB 1 to see to it that no sabotage attempts are made for Zero X’s second attempt to launch. Lady Penelope also acts a reporter for a British magazine once she’s in America. 🙂

She gets to interview each of the Zero X crewmembers, including Captain Paul Travers, and gives them a St. Christopher medal each which contains a homing device. When one of the crew – Dr. Grant – is exposed as an imposter, Lady Penelope and Parker chase after that evil imposter in FAB 1.

The Zero X saboteur turns out to be the Hood of all people! 😀 It’s not clear why the Hood would want to sabotage the Zero X in the movie. The Hood doesn’t have such a big appearance as he does in many ‘Thunderbirds’ episodes, but I liked the moment that he’s revealed as the imposter by Scott.

I also liked it when he was in a motorboat and being chased by Lady Penelope and Park in FAB 1 on hydrofoils out on sea. I laughed when the Hood went, “I don’t believe it! I don’t believe it!” Worse Victor Meldrew impression ever! 😀 There was another scene featuring the Hood, but it got deleted.

There was also a deleted scene featuring Lady Penelope and Parker aboard the Fireflash on their way to America, I believe. The movie does feature a story for Alan Tracy. When the second launch of the Zero X is successful, Scott and Virgil go with Lady Penelope to this nightclub called Swinging Star.

Alan is unhappy that he’s left to stay behind on Tracy Island. I wonder if Gordon went to the Swinging Star nightclub too. During the night, Alan has a dream where he and Lady Penelope go off to the Swinging Star and travel in FAB 1 which flies up into space. FAB 1 can fly? I never knew that. 😀

They are called the Shadows. They perform a music suite for ‘Lady Penelope’ in the film. There’s also Cliff Richard Jr. (voiced by Cliff Richard himself) singing the song ‘Shooting Star’ at the Swinging Star nightclub with the Shadows. It’s intriguing that the moon is made out of banana instead of cheese. 🙂

Meanwhile with Zero X, they successfully arrive on Mars and the MEV sets out its first exploratory survey of the planet surface. I found the planet Mars rather disappointing when I saw what the planet surface looked like. For me, Mars is a red planet. It’s how it’s often depicted in films and TV! 🙂

Seeing it as a desolate grey rocky planet didn’t agree with me at all. However, the rock snakes that attack the Zero X MEV vehicle were terrifying to watch. When I was a kid, I was terrified when I saw their red eyes and when they fired balls of fire at the Zero X heroes in their MEV vehicle. So gripping!

Zero X eventually makes a return journey to Earth and re-enters the planet’s atmosphere. The procedure for reassembling the two Lifting Bodies on the main body of Zero X takes place and goes horribly when one of the Lifting Bodies – Lifting Body 2 – malfunctions. A shame not all went to plan.

On Blu-ray, as well as the original theatrical trailer for the film and the audio commentary with Sylvia Anderson and director David Lane, there are special features like ‘Excitement is Go! Making Thunderbirds’, Cliff Richard and the Shadows unseen test footage, ‘History and Appeal’, ‘Factory of Dolls and Rockets’, ‘Epics in Miniature’, a photo montage, ‘Come With Me to the Rushes’, ‘What Does F.A.B. Mean?’, the MGM 90th anniversary trailer, an isolated score track by Barry Gray and an audio commentary with film historians Jeff Bond and Nick Redman.

‘Thunderbirds Are Go’ is definitely my favourite film out of the two 1960s ‘Thunderbirds’ movies that are continuations of the original TV series! I enjoyed the spectacular Zero X sequences, the story and how the Thunderbirds team gets called in to rescue them, especially in the film’s second half. 😀

The film does feel pretty epic and I love the Zero X music composed by Barry Gray, which I’m currently listening to via YouTube as I write this review. I’m sure you’ll enjoy this exciting movie classic from the ‘Thunderbirds’ TV series. If you’re a ‘Thunderbirds’ fan, you’re bound to enjoy this film. 🙂