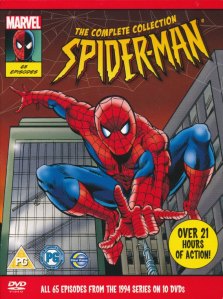 ‘DAY OF THE CHAMELEON’

It’s the season finale of Season 1 in the animated ‘Spider-Man’ series and Spidey comes up against the villainous Chameleon. The Chameleon is an international spy who can disguise himself as any person. He wants to disrupt a peace conference. A secret organisation named S.H.I.E.L.D. hunts him.

As well as introducing the Chameleon, this episode also introduces Nick Fury, the head of S.H.I.E.L.D. He’s very different compared to the Nick Fury we’ve seen in the ‘Marvel Cinematic Universe’ films. But at least Fury still has that eye patch over one of his eyes and he seeks J. Jonah Jameson for help.

Nick Fury asks Jameson for his assistance to capture the terrorist called the Chameleon during the peace conference. Jameson does all he can to help, especially with the badge he is given. But it turns out Spidey is a more useful ally for S.H.I.E.L.D. since he can track down the Chameleon’s movements.

Actually, when Jameson was captured by S.H.I.E.L.D., Peter was with him in his car at the time. Peter is able to overhear the conversation between Jameson and Nick Fury when he crawls through the ventilation shafts. When Peter asks Jameson what occurred, Jameson refuses to tell anything to him.

Peter Parker sadly disappoints Mary Jane in the episode when he was meant to attend for her Shakespeare theatre performance one evening. It’s understandable though as Mary Jane mistook the Chameleon for Peter when he took on his identity. Peter still gets slapped by Mary Jane in this. 😦

The episode also introduce Gloria (or Glory) Grant, Jameson’s secretary at the Daily Bugle. I thought the animated series’ producers would’ve gone for Betty Brant instead as depicted in the 1967 cartoons and the Sam Raimi/Tobey Maguire movies. Thankfully the Chameleon is beaten at the end.

I like how the Chameleon becomes a formidable opponent for Spidey especially when he changes identities of various people with that hologram buckle on his belt. The final confrontation between Spidey and Chameleon (disguised as Peter Parker) was intense. Nick Fury does thank Spidey at the end.