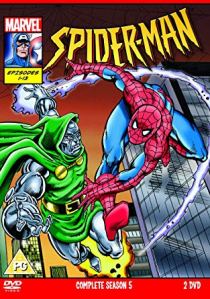 It’s time for the biggest story to be featured in the 1990s ‘Spider-Man’ animated TV series. ‘Six Forgotten Warriors’ takes up most of Season 5 as the story is divided into five chapters. There’s a lot going on in this story. Even my Mum found this five-parter a challenge to follow as we watched it. 😀

In ‘Chapter 1’, Peter discovers some disturbing secrets about his parents. Aunt May reveals to Peter that his parents were international spies and that they were traitors to America. Peter is determined to go to Moscow to uncover the truth. Robbie Robertson accompanies Peter to find answers as well.

It was interesting to watch this story and find out more about Peter’s parents – Richard and Mary Parker. Peter’s parents have been depicted in ‘The Amazing Spider-Man’ movies and they were spies in that. They were presumed dead and the case seems to apply for Peter’s parents in this five-parter.

Aunt May receives a visit from an old friend Keen Marlow who happens to be an international spy who knew Peter’s parents and was a friend of Uncle Ben. Keen Marlow’s visit to Aunt May’s house comes after the German scientist called Dr. Groitzig reappears after years of being assumed dead. 😮

The Kingpin meanwhile takes matters into his own hands once he hears Dr. Groitzig’s alive. He reassembles the Insidious Six which includes Dr. Octopus, the Rhino, the Shocker, the Scorpion, Chameleon and the Vulture (replacing Mysterio as he died in ‘The Haunting of Mary Jane Watson’).

This story also features the return of S.H.I.E.L.D. and Nick Fury. Spidey/Peter follows Keen Marlow to S.H.I.E.L.D. HQ in the sky as he meets up with Nick Fury, learning his parents have been branded traitors. Doc Ock, Rhino, Shocker, Scorpion and Vulture also attack S.H.I.E.L.D. in order to rescue the Chameleon.

As Peter decides to go to Moscow and says goodbye to Mary Jane, he persuades J. Jonah Jameson of the Daily Bugle to get him a plane to go there. He tells him Spidey is going to Moscow. Jameson tells Peter to get a story out of Spidey visiting Moscow and Robbie insists he accompanies Peter on the journey.

It was fascinating to see Spider-Man in Moscow for a change compared to being in New York. This story also features Silver Sable, who I didn’t realise was in this story as I re-watched it. Silver Sable has also appeared in ‘Spider-Man: The New Animated Series’ and was in the ‘Spider-Man’ PS4 game.

In ‘Chapter 2’ of the story called ‘Unclaimed Legacy’, Peter gets more than he bargained for. He and Robbie investigate the mystery of Peter’s parents when seeing someone in Moscow. Spidey’s enemies catch up with Peter though. The Insidious Six and the Kingpin also happen to be in Moscow.

It was fun to see Spidey fighting against Doc Ock, the Rhino, the Shocker, the Scorpion, the Chameleon and the Vulture in Moscow whilst he’s trying to learn the truth about his parents. The story features this plot element regarding a doomsday weapon that almost got used in World War II.

We do get a flashback scene of Peter’s parents meeting up with Dr. Groitzig many years ago before they were killed. Groitzig’s daughter Illyena relates what she heard as a little girl to Peter many years later. She also gives Peter a special box until the Chameleon, disguised as Illyena’s husband, steals it.

There is a unique atmosphere to this five-part story in terms of featuring grown-up elements in it. This is especially in the espionage elements concerning Peter’s parents and how the consequences of World War II come into play. It’s a marked difference from how the ‘Spider-Man’ TV series began.

That someone happens to be Rheinholt Kragov. It was interesting to see how the Red Skull’s son makes an appearance in this ‘Spider-Man’ story. He even disguises himself as the Red Skull with a mask on before the Kingpin manages to get free of his cubicle and unmasks him in the episode itself.

Eventually, an explosion occurs at Kragov’s base of operations. Everybody including Spider-Man, the Kingpin, the Insidious Six, Kragov and Silver Sable’s team make an escape just before the place crumbles apart. Spidey also finds a new kind of ally in Silver Sable. She’s not villainous as she seems.

There’s also an interesting new layer to Spidey/Peter’s relationship with Robbie Robertson, especially as he knows about the Six Forgotten Warriors and hopes to introduce someone to Peter. Peter returns home to tell Aunt May the news that his parents weren’t accused traitors as claimed.

It turns out that five more warriors were created to help Captain America fight against the foes in World War II and they called the Six American Warriors then. These included the Whizzer; Miss America; the Thunderer; Black Marvel and the Destroyer. I haven’t heard about these heroes before.

According to the research I did, these superheroes did appear in the comics during the 1940s. That was fascinating to discover. I wonder if the ‘MCU’ will ever present a Captain America movie where he gets to team up with the Whizzer; Miss America; the Thunderer; Black Marvel and the Destroyer.

Unfortunately, the five American heroes that got their powers after Captain America can only use them temporarily. Captain America and the Red Skull also got lost in time when they fought each other. The Whizzer; Miss America; the Thunderer; Black Marvel and the Destroyer got discharged. 😦

In the present day, as Spider-Man goes out searching for the Six Forgotten Warriors, the Kingpin starts interrogating which one of the Insidious Six had betrayed him during their trip to Moscow. This is before he sends each of the Insidious Six to collect six statue keys for a doomsday weapon. 😮

These keys are kept by the Six Forgotten Warriors. The Whizzer gets attacked by the Rhino at his home whilst Miss America gets chased by the Vulture before Spider-Man saves her. Unfortunately, Whizzer and Miss America have their keys stolen. The Destroyer is the next warrior to be targeted. 😐

In ‘Chapter 4’ of the story called ‘The Six Fight Again’, Spider-Man and the Destroyer attempt to stop the Chameleon, disguised as Robbie Robertson, stealing the next two statue keys for the doomsday weapon from Omar Mosley. Spidey and Destroyer soon fight against the Insidious Six led by Kingpin.

They eventually saved by Black Marvel who turns out to be Omar Mosley after all. Spidey also saves the real Robbie Robertson from falling to his death by the Kingpin. Spidey soon joins five of the Six Forgotten Warriors in preventing the Kingpin and the Insidious Six stealing the doomsday weapon. 🙂

Despite the five Six Forgotten Warriors being older than when they were in the 1940s and having problems with their powers, they’re willing to put a fight alongside Spider-Man. Miss America and the Whizzer soon join Spider-Man, the Destroyer and Black Marvel when they meet at their old base.

Black Marvel also has Captain America’s shield which they use to fight against their enemies. They join up with the Thunderer who has been living as a homeless to prevent anyone from stealing the last statue key. This doesn’t turn out well as the Kingpin and the Insidious Six manage to get the key.

The Chameleon is working with Kragov, the son of the Red Skull. They both trap the Kingpin, Doc Ock, Rhino, Shocker, Scorpion, Vulture, Spidey, Destroyer, Black Marvel, Miss America, Whizzer and Thunderer before freeing the Red Skull out of time. Soon some giant robots are unleashed to attack.

Silver Sable and her wild pack also help free Spider-Man and the Six Forgotten Warriors. This is before Silver Sable and Spider-Man chase after the Red Skull who takes his son Kragov to show him something. What could that be? The Kingpin is also about to crush the Chameleon for betraying him.

In ‘Chapter 5’ of the story called ‘The Price of Heroism’, this is where things go downhill for me in terms of the ‘Spider-Man’ 1990s animated series being a faithful TV adaptation of the comics. For you see, a new villain is born as the Red Skull’s son Kragov becomes… (sighs) the powerful Electro! 😦

Oh dear! This is where the storytelling in the ‘Spider-Man’ 1990s TV series got out of control. Electro was introduced rather late in the ‘Spider-Man’ series since he and Sandman couldn’t be used due to the James Cameron ‘Spider-Man’ film being developed in the 1990s but did not get made in the end.

When the James Cameron film got scrapped, the makers of the TV series decided to include Electro at the last minute. And it’s not done well in my opinion. Not only is Electro not Max Dillon (‘The New Animated Series’ and ‘The Amazing Spider-Man 2’ did this right), but he only appears in one episode!

This episode! And it’s the finale to this five-part story about the Six Forgotten Warriors. Wouldn’t it be better to have the Red Skull’s son as something else other than Electro? Or at least if he is going to be Electro, have him appear in two episodes of the story rather than just the last one for fulfilment.

With that said, Kragov as Electro in this story does become all powerful in being the ultimate weapon. I like how he goes against his father the Red Skull and even knocks villains like the Kingpin and the Insidious Six before he goes out to control the world’s energy reserves to obtain domination.

I wish it was Max Dillon as Electro in the 1990s ‘Spider-Man’ animated series though as it was a faithful TV adaptation of the ‘Spider-Man’ comics up until then. Anyway, Spidey and the Six Forgotten Warriors including Captain America team up to find a way to stop Electro in his evil plans.

It ends up with Captain America and the Red Skull back in the time vortex again, but at least Electro’s sucked in too and the remaining Six Forgotten Warriors are happy the Earth is safe again. Spidey/Peter also sees Mary Jane who is happy he’s still alive after being concerned about him in the story.

Overall, ‘Six Forgotten Warriors’ has been an enjoyable and compelling five-parter in Season 5 of the ‘Spider-Man’ series. In no way is it excellent, especially with Electro being introduced hastily in the final episode. But overall, I enjoyed how Spidey/Peter got caught up in this adventure full of intrigue.