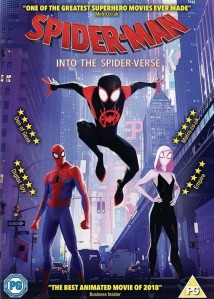 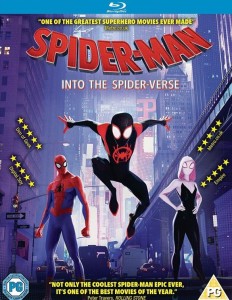 ‘SPIDER-MAN: INTO THE SPIDER-VERSE’

The ‘Spider-Verse’ Spider-Men with the Kingpin and More 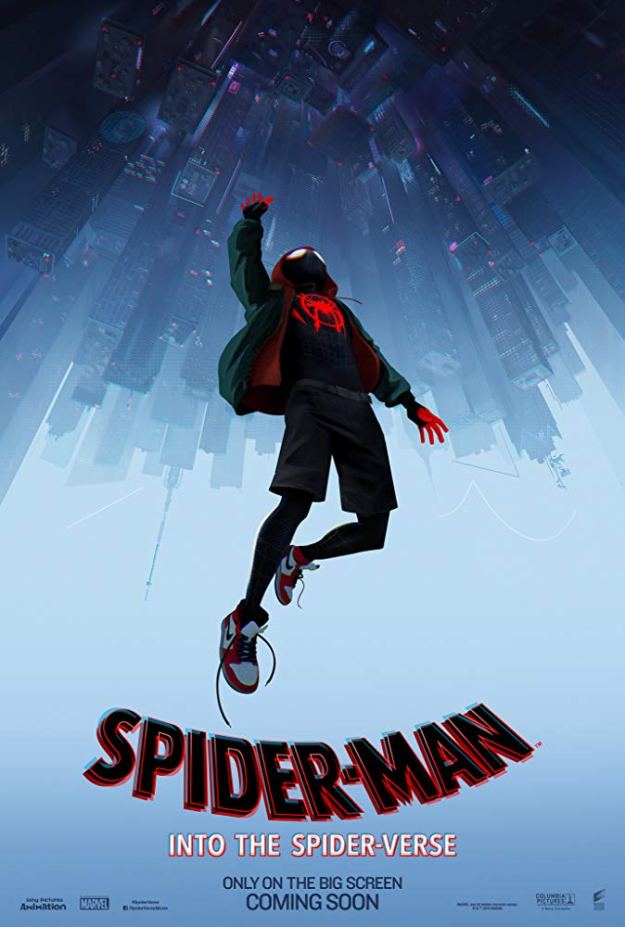 Alright! Let’s do this one more time! 🙂

Nevertheless, this computer-animated ‘Spider-Man’ movie that was shown before Christmas time in 2018 received high acclaim upon release. It quickly became one of the most popular films ever made featuring the webslinger…or webslingers. Me personally, I found this an entertaining superhero flick!

‘Spider-Man: Into the Spider-Verse’ is from the creative minds of Phil Lord and Christopher Miller, who did ‘The LEGO Movie’. It features the voice talents of Shameik Moore, Jake Johnson, Hailee Steinfeld, John Mulaney, Kimiko Glenn, Nicolas Cage, Liev Schreiber and more. The film was directed by Bob Persichetti, Peter Ramsey and Rodney Rothman, who provide a lot of creative talent in this. 🙂

Spider-Man is one of my favourite superheroes from the Marvel Comics genre, if not my most favourite out of all the superheroes I’ve seen. I missed seeing the first ‘Spider-Man’ movie at the cinema, but I have caught up with the other ‘Spider-Man’ films released at cinemas over the years. 🙂

I could’ve easily missed this computer-animated ‘Spider-Man’ movie by a mile. Thankfully, I did see it one weekend in December 2018. I found the film entertaining and compelling. It fulfilled the inner ‘Spider-Man’ fan in me with some zany humour, a unique comic book style and impressive action. 😀

With that said, I don’t feel this is my kind of ‘Spider-Man’ film. It’s not just for the fact that it’s computer-generated. The film does feel quite noisy in places with so much going on. It doesn’t strike that emotional core of ‘Spider-Man’ that I’ve become pretty used to in say…the Tobey Maguire films.

I wasn’t sure if this ‘Spider-Man’ movie would be for everyone when I saw it at the cinema in December 2018. But in a strange way, I recommend this film for any ‘Spider-Man’ fan. It was certainly a Christmas treat I’m glad I didn’t miss out on, and it was so cool to see it on the big screen.

Around May 2019, I purchased the film on Blu-ray rather than on DVD. I still enjoyed the film when I saw it on Blu-ray, but I don’t think it was that impressive seeing it on the small screen compared to the big screen. It’s definitely a ‘Spider-Man’ animated movie that needs to be seen on the big screen.

The film’s story focuses on the character of not Peter Parker…but on Shameik Moore as Miles Morales. In his universe, Miles is a Brooklyn teenager. He’s a fan of Spider-Man, who happens to be Peter Parker but with blond hair. Weird?! Anyway, Peter Parker as Spider-Man gets killed in the film.

This makes me curious! Why didn’t Chris Pine voice the Peter B. Parker Spider-Man who meets Miles after the blond-haired Spidey died? I know it’s an older Spidey with Peter B., but Chris Pine can do an older voice, can’t he? Thinking about it, why didn’t William Shatner voice Peter B. Spidey. It’d be cool!

But yeah, like I said, Miles Morales meets up with another Spider-Man who happens to be an older Peter Parker. He also meets up with various versions of Spider-Man/Spider-Woman from parallel universes. These Spider-People have been brought together by some particle accelerator machine. 😐

The machine was devised by the Kingpin’s scientist assistant, Kathryn Hahn as Olivia Octavius who happens to be Doc Ock. This is where things become intriguing. It makes this ‘Spider-Man’ movie more than an origins story for Miles Morales with it having so many varying versions of Spider-Man.

Here are the versions of Spider-Man/Spider-Woman that Miles meets in the film. There’s Jake Johnson as Peter B. Parker/Spider-Man. Again, why wasn’t it Chris Pine or William Shatner? He becomes Miles’ reluctant mentor. He’s a dishevelled version of the hero, as he’s older and eats a lot.

Intriguing side note! When my parents saw this film with me recently, my Dad remarked that Peter B. Parker looked like David Tennant. As I think about it, why wasn’t David Tennant cast to play Peter B. Parker/Spider-Man in this movie. That would have been awesome! I wish we could’ve seen that. 🙂

There’s Hailee Steinfield (who I would later see in the ‘Transformers’ movie ‘Bumblebee’) as Gwen Stacy/Spider-Woman or Spider-Gwen, however you want to call her. Gwen meets Miles at his school when going undercover. How the school didn’t register Gwen not being of their school, I don’t know.

There’s Nicolas Cage (this was the first time I heard his voice in a film, I believe) as Peter Parker/Spider-Man Noir. He’s a 1930s version of Spidey based on Humphrey Bogart. I enjoyed this version of Spider-Man, who was from black-and-white films and he wears a hat and a trench-coat. 😀

John Mulaney voices Peter Porker/Spider-Ham or Spider-Pig, if you get ‘The Simpsons Movie’ reference. Making no joke about it, Spider-Ham is the cartooniest character ever in the entire bunch of Spider-Men in this film. This is where things get rather silly and unrealistic for my liking in this film.

And there’s Kimiko Glenn as Peni Parker/SP//dr, who is a young Japanese anime-like girl that co-pilots a bio-mechanical suit with a spider in it. Impressive they combined 2-D animation for Spider-Ham and anime animation for Peni Parker with 3-D CGI animation for this unusual ‘Spider-Man’ film!

And I just realised that Spider-Man Noir, Spider-Ham and Peni Parker do exist as comic book characters. I’m surprised this movie didn’t also include the Spider-Man with his own ‘Power Rangers’ Megazord from the 1970s Japanese TV show. (Pause) Oh, I’m not making that up! That show existed!

But yeah! You can see clearly that this is a movie featuring many versions of Spider-Men/Spider-Women whom Miles Morales meets in his universe. This is a pretty neat idea and it does remind me of a similar concept in the ‘Spider Wars’ two-parter from the 1990s ‘Spider-Man’ animated TV series.

I feel that this film missed an opportunity here where they could’ve had the Tobey Maguire, Andrew Garfield and Tom Holland versions of Spider-Man from the live-action films meeting each other. Perhaps this is something that’s being saved for future sequels with this animated ‘Spider-Man’ film.

Why not go further? We could’ve had a Spider Skywalker from ‘Star Wars’, a Starfleet starship captained by Captain Spider of the USS Spider-prise from ‘Star Trek’ and a Dr. Spider travelling in his/her TARDIS from ‘Doctor Who’ in this ‘Spider-Man’ movie. I’m digressing here and it’s probably silly. 😀

Anyway, the story has Miles Morales grow to becoming the hero he wants to be by being Spider-Man. He gets his own Spidey outfit that is so unique in design and totally different to Peter Parker’s Spidey outfit. Incidentally, Miles Morales’ Spider-Man has existed in the Marvel comics from 2011. 🙂

Shameik Moore as Miles Morales makes an intriguing debut in the ‘Spider-Man’ movies with this animated ‘Spider-Man’ film. It’s intriguing how he’s introduced with his family background and how he becomes Spidey. I don’t think though that Miles as a character is that well-fleshed out in the film.

After watching the ‘Spider-Man’ PS4 video game on YouTube, I find the Miles character better in that than in this film. With things being so noisy and rush-rush as well as the zany artistic comic book style going on in this movie, I don’t feel the same empathy for Miles like I had for Miles in the PS4 game.

There were lots of characters and references to ‘Spider-Man’ in the movies and the comics that I recognised whilst watching this film. There’s even a Spidey-styled Bat-cave featured in the film where we see the Spider-suits and… Did I see the PS4 ‘Spider-Man’ outfit?! Oh goodness, I did see it!

The Prowler makes an appearance in this movie. There was a shocking twist that I didn’t expect. Mahershala Ali voices Aaron Davis a.k.a. the Prowler in the movie. Strange. I thought Hobie Brown was the Prowler. It was gripping and heartbreaking for Miles once he saw his uncle as the Prowler. 😦

The movie also features Spider-Man villains like the Green Goblin, Tombstone and the Scorpion. The Green Goblin looks more like the one I’ve seen in the ‘Ultimate Spider-Man’ comics. The Scorpion also looks different. He doesn’t have that quite familiar green-masked outfit that I recall him having.

Liev Schrieber (who was in ‘X-Men Origins: Wolverine’) as the Kingpin…isn’t as good as the one in the ‘Spider-Man’ PS4 universe, both in the game and the ‘Hostile Takeover’ book. He doesn’t do much crime bossing, as he causes havoc with the particle accelerator, wanting his dead wife and son back.

Kathryn Hahn as Olivia Octavius was fun to watch in this movie, especially when she turned out to be a female Doc Ock working for the Kingpin. Honestly, I think she should have been the main villain of this ‘Spider-Man’ movie. Like Kingpin, she doesn’t have much screen-time with committing crimes. 😐

There’s Brian Tyree Henry as Jefferson Davis, Miles’ father, and Luna Lauren Velez as Rio Morales, Miles’ mother. Honestly, I prefer the Jefferson Davis in the ‘Spider-Man’ PS4 game, but it’s intriguing how he’s someone who doesn’t like Spider-Man. It’s nice how his relationship with Miles played out.

The film also features Lily Tomlin as Aunt May and Zoë Kravitz as Mary Jane Watson. I was delighted to see Aunt May and MJ in this film. I’m not sure I’m all too comfortable about Aunt May kicking a door down like she’s an action-woman of some kind. Somehow that didn’t ring true for Aunt May.

I was satisfied with how a certain romantic plot thread between Peter B. Parker and Mary Jane got resolved in the film. It was subtle, especially when in Peter B. Parker’s universe, they split up because MJ wanted kids and he didn’t. I really hope their romantic relationship will keep firm in the sequel. 🙂

There was also a lovely guest cameo of the late Stan Lee, Spider-Man’s co-creator. I was pleased to see his cameo. This was just two months after Stan Lee sadly passed away in October 2018. I think his cameo in the ‘Spider-Man’ PS4 game is better, but it’s so good that this movie acknowledged him. 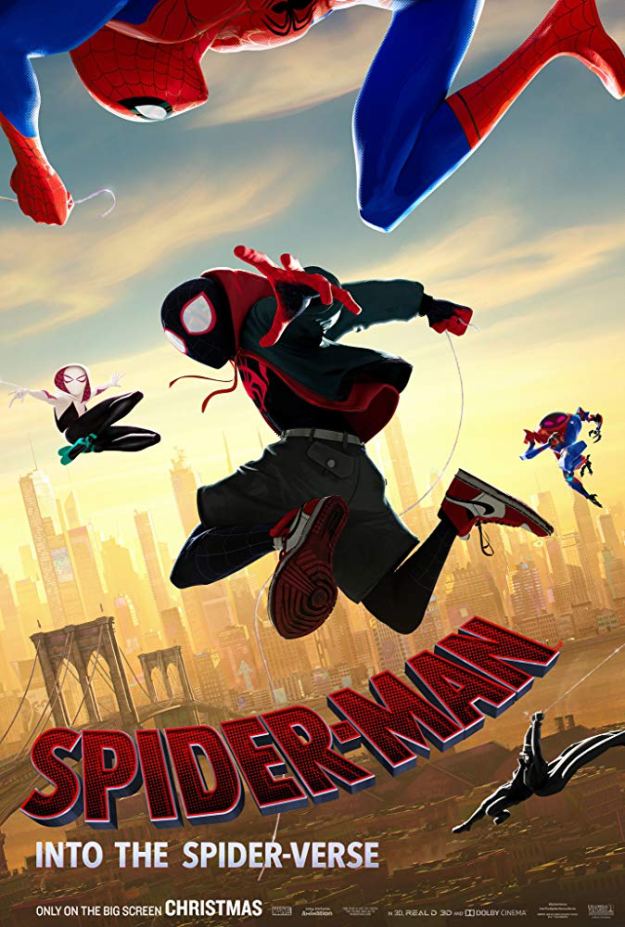 ‘Spider-Man: Into the Spider-Verse’ is a good action-packed, computer-animated superhero film with zany humour and a comic book style that’s unique. I wouldn’t say this is my type of ‘Spider-Man’ movie, but I highly recommend it and suggest that you check it out, even if it’s not on the big screen.

I wouldn’t say this film tops up on the quality of ‘Spider-Man’ movies I’ve seen, especially in the Tobey Maguire/Sam Raimi field. But this is quite an amazing superhero flick that will make ‘Spider-Man’ fans happy, whether you’re into the comics, movies, video games, TV shows or just a casual fan.

The film has a post-credits sequence where Oscar Isaac as Miguel O’Hara/Spider-Man 2099 travels back in time to 1967 New York to meet up with the Spider-Man from the 1967 TV series, voiced by Jorma Taconne. The scene between 2099 Spider-Man and 1967 Spider-Man is very funny to watch. 🙂

2 thoughts on “‘Spider-Man: Into the Spider-Verse’ (Film)”