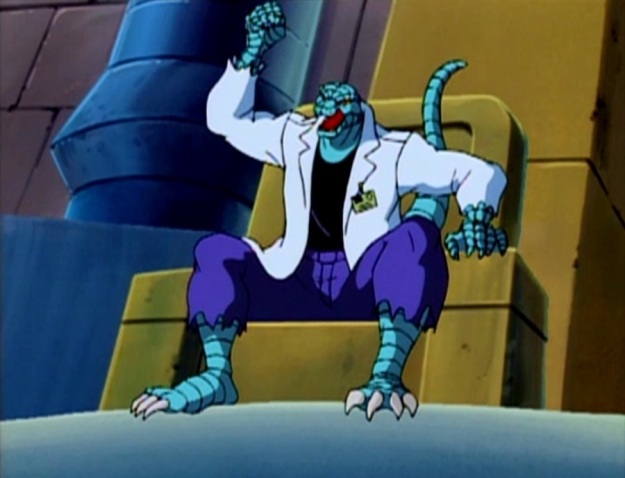 I’m classing ‘The Haunting of Mary Jane Watson’ and ‘The Lizard King’ as a two-part story. Despite a ‘To Be Continued’ at the end of ‘Haunting’ and a recap at the beginning of ‘Lizard King’, I’d like to think these two episodes are separate stories. The same for the ‘Spider Slayer’ episodes in Season 1!

Anyway, Peter reveals to Mary Jane that he’s Spider-Man. Mary Jane is surprised as Peter swings her around New York. Peter also pops the question to Mary Jane to marry him. Mary Jane falls off a building for Peter to catch him and she accepts. That was a very drastic thing for Mary Jane to do. 😀

Peter and Mary Jane share their news to Aunt May and Aunt Anna that they’re both going to get married. Aunt May is pleased whilst Aunt Anna’s not too happy. I’m glad Aunt Anna doesn’t get in Mary Jane’s way. Mary Jane is really determined to marry Peter Parker no matter what the risks are.

I wish the ‘Spider-Man’ movies under Sam Raimi’s direction took an example of this from the 1990s ‘Spider-Man’ TV series. MJ could’ve been an active character in ‘Spider-Man 3’ to help Peter in his endeavours as Spidey as Mary Jane in this episode helps Peter out when he has to tackle the Lizard.

Yes! That’s right! Dr. Connors becomes the Lizard again in this episode. Peter and Mary Jane go to see Dr. Connors and ask him to give the bride away at their wedding. But Dr. Connors is haunted by mysterious man-sized lizards that were created accidentally by Connors and consider him their father.

It was unusual to see these man-sized lizards that were born from the sewers of New York and that they can talk. One of the lizards – a female called Gila wants to be peaceful in living among humans. Others like males called Gecko and Monitor want to destroy humanity and become very savage-like.

Once Peter sends Mary Jane away for her safety, she goes to see Dr. Connors’ wife Margaret to tell him the news about her husband. Mary Jane and Margaret get assistance from Debra Whitman, who seems seem to go out partying on the town with Flash Thompson whereas he wishes to do studying.

Dr. Connors does become animal-like and vicious once he becomes the Lizard and fights Spider-Man along with the lizard warriors. Thankfully, the Lizard is thwarted and Connors is back to normal. The lizards also return to normal too. Mary Jane is also happy in getting married to Peter as Spider-Man.

The next story is Return to Spider-Man