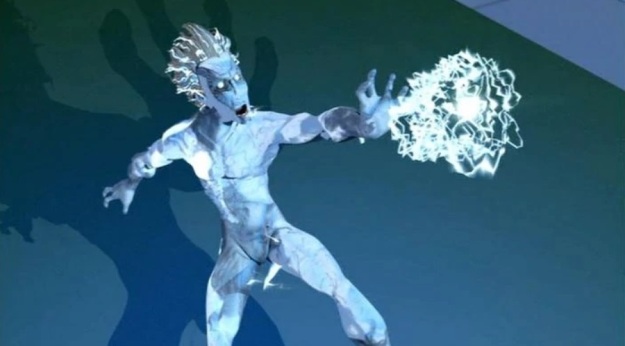 Here we are on a highlight in the new animated ‘Spider-Man’ TV series from 2003. This episode features the first appearance of Electro! Max Dillon (voiced by Ethan Embry) previously appeared in ‘Head Over Heels’. This is where Max becomes the supervillain. Interesting how he becomes Electro.

Max, as a character, is a geeky friend of Peter’s at ESU. He tries to fit into college life but gets bullied by the leader of a fraternity called Doug Reisman (voiced by Jeff Fischer). Max becomes the victim of a practical joke at first when he’s blinded and put into a limousine that soon gets out of control here.

After being rescued by Spider-Man, Max tries to join Doug Reisman’s fraternity, unaware that the practical joke with the limousine was played on him by Reisman. At a party, Max becomes the victim of a big joke again when he gets rejected by Reisman and his kind. He gets hit by their paintball guns.

The prank takes a turn for the worse. As Max becomes humiliated, he runs off and gets electrocuted before he transforms into Electro. The look for Electro in the new animated ‘Spider-Man’ 2003 series is echoed in ‘The Amazing Spider-Man 2’ 2014 film. I don’t know which Electro look is better though.

Electro becomes a high voltage villain who threatens the campus and settles a score with his previous tormentors. Becoming relentless, Spider-Man swings in to try and stop Electro from destroying innocent and no so innocent people. It’s intriguing how Spidey tackled Electro in the tale.

At first, Spidey is flippant and jokey when fighting against Electro. This is before he gets a good look at him and realises that it’s Max who’s the villain. Spidey tries to talk Electro out of killing people but Electro is pretty vengeful. Fortunately, Spidey gets to defeat Electro, utilising an electric transformer.

Throughout the episode, Peter gets teased by MJ and Harry about coming to the party since he’s always studying and never has time for socialising. Peter however did turn up at the party as Spider-Man when he fought against Electro. Peter, MJ and Harry are at Reisman’s gravestone by the end. 😐

‘The Party’ is a pretty good episode in the new animated ‘Spider-Man’ 2003 series featuring Electro as the villain. I like how Peter connects to Max as a student and when he tried to connect to him as Electro once fighting him as Spider-Man. But as it turns out, this isn’t the last we’ll hear of Electro. 😀

The DVD special features for this episode are as follows. On Disc 1 of ‘Spider-Man: The New Animated Series’, there’s a DVD audio commentary with director/executive producer Audu Paden; CGI producer Steven Wendland; associate producer Gio Corsi and supervising animator Robin Shea. There’s also an ‘Amazing Spider-Facts’ info-text commentary option to enjoy. There’s also production artwork for the series including on the main characters, the villains, the guest characters and miscellaneous. There’s a DVD-Rom feature which is a character modeller; filmographies and trailers including one for ‘Spider-Man: The New Animated Series’.