‘HOW TO STEAL THE WORLD’

Five Scientists and Gas To Conquer The World

‘How To Steal The World’ is the fifth film in the 3-disc DVD set of ‘The Man From U.N.C.L.E.’ movies, although technically it is the eighth in the eight film series from the 1960s. This was released in 1969.

The film was directed by Sutton Roley. ‘How To Steal The World’ is essentially a feature-length movie version of ‘The Seven Wonders of the World Affair’ which was the last two-part tale of the TV series.

This is another occasion where I found I didn’t enjoy this movie as much as I enjoyed ‘The Karate Killers’ two movies ago. Again, this is a decent film but you need to get into the story’s complexities.

It’s a shame since this is the last film of the original eight film run of ‘U.N.C.L.E.’ and I would’ve liked it to have been spellbindingly epic. Maybe it works a finale for a TV series compared to a film series.

Anyway, in this film, Napoloen Solo and Illya Kuryakin follow the dangerous trail of a baffling mystery as a former U.N.C.L.E agent has disappeared. This all soon leads our two heroes into deadly trouble.

There have also been these five top world scientists who have been mysteriously abducted. Our heroes go off to the Himalayas and find their former U.N.C.L.E. agent preparing to be a world dictator.

Once again, Robert Vaughn delivers a great performance as Napoleon Solo, keeping the charm and wit intact as well as the action. Napoleon does have a rough time by himself once his plane explodes.

He first struggles to survive in the Himalayas before he finds the enemy’s base of operations. He’s first treated well once captured and has a white robe donned on him. But how long will luxury last?

David McCallum once again returns to deliver a great performance as Illya Kuryakin. He gets concerned when Napoleon gets lost out in the Himalayas before he goes in a helicopter to find him.

He’s accompanied by Steven Garrow when trying to look for Napoleon and for Steven’s father. Unfortunately Solo and Kuryakin are about to be gassed to death by their enemies. Will they escape?

Barry Sullivan stars as Robert Kingsley, the former U.N.C.L.E. agent who sets himself up as world dictator. This villain has interesting motivations of ‘peace’ when wanting to spread mind-control gas.

Eleanor Parker stars as Margitta Kingsley, Robert Kingsley’s wife in the film. Margitta has her own plans for using the gas as opposed to what her husband wants. She is also cheating on her husband.

Leslie Nielsen stars as General Maximilian Harmon who works with Robert Kingsley in his grand scheme for world domination. He’s more trigger happy than Kingsley in order to protect their plans.

Tony Bill stars as Steven Garrow, the son of Professor David Garrow who also has a romantic thing going with Anna Erikson, the daughter of Dr. Kurt Erikson. He also seems to be a reckless youth here.

Albert Paulsen stars as Dr. Kurt Erikson, one of the scientists working for Kingsley and Anna Erikson’s father. Erikson has her daughter join her on assignments but does not tell her anything about them.

Inger Stratton stars as Anna Erikson, Dr. Kurt Erikson’s daughter and Steven Garrow’s potential lover. I liked how determined she becomes helping the good guys despite being on the bad guys’ side first. 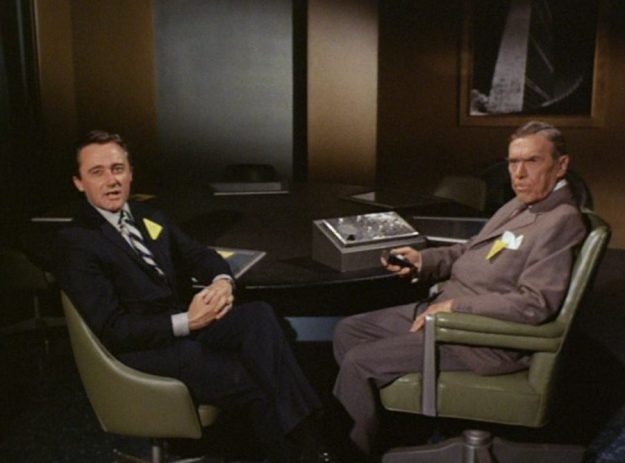 Leo G. Carroll also returns as Alexander Waverly in charge of U.N.C.L.E. I’m sure Waverly’s character is more interesting in the TV series compared to these movies. Carroll’s better in ‘North by Northwest’.

Daniel O’Herlihy stars as Professor David Garrow, Steven Garrow’s father. He gets abducted and first has a homing device planted on him by U.N.C.L.E. It is soon discovered and his family is threatened.

There’s also David Hurst as Dr. Jan Vanovech; Edgar Stehli as Veeth and Barbara Moore as Lisa Rogers. A lot of these characters I assume work as scientists for Kingsley but it’s not made very clear.

‘How To Steal The World’ is not a great film to end the eight series run of ‘U.N.C.L.E.’ movie versions of TV episodes. But it was decent enough and I did enjoy the action-packed sequences featured in it.

‘The Man From U.N.C.L.E.’ 3-disc DVD set of films has been enjoyable to watch. I don’t know how they compare to the TV series, but I imagine the TV versions of these films are superior. I’ve enjoyed these five ‘U.N.C.L.E.’ movies with ‘One Spy Too Many’ and ‘The Karate Killers’ as my two favourites.

I don’t know if watching the TV versions of these films will make a difference. It’ll be interesting to see in making comparisons as to what’s similar and different from both TV and films versions. Overall this has been an entertaining collection and Robert Vaughn and David McCallum are brilliant!