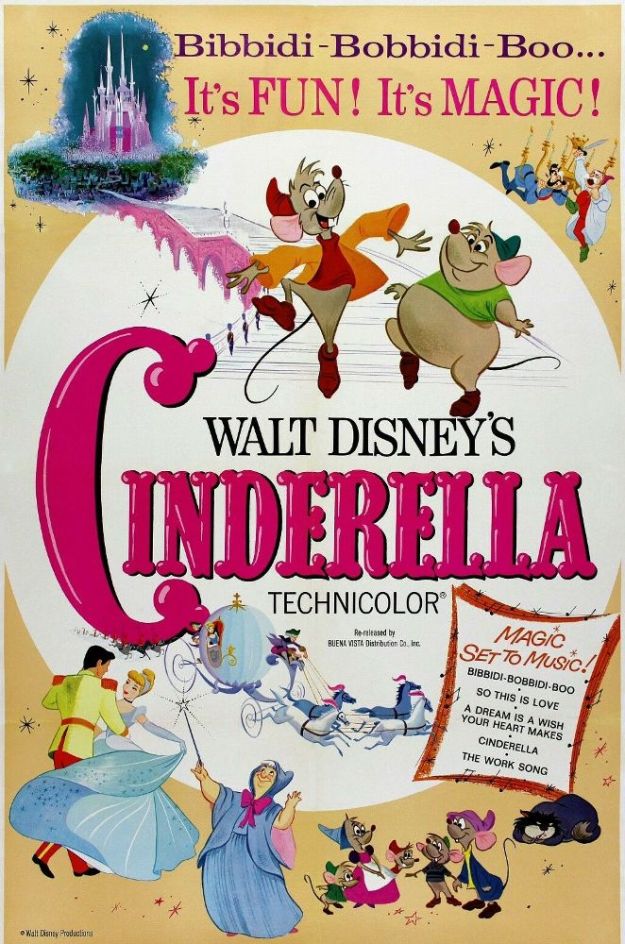 It’s time for a Disney animated classic that I have a soft spot for!

‘Cinderella’ was made in 1950! I saw the film on VHS when I was a kid during the 1990s. I recall having fond memories of it. It’s not exactly the romantic film you would expect between Cinderella and the Prince, but this has lots of fun and laughs to enjoy especially with the supporting characters.

My Dad purchased the 2-disc Special Edition DVD of ‘Cinderella’ when it was released at around 2006 time. It has the film on Disc 1 and the special features on Disc 2. There have been plenty of re-releases of 1950’s ‘Cinderella’ both on DVD and Blu-ray, but this 2-disc DVD with special features is good.

The classic story of ‘Cinderella’ has been told many times. It’s the story of a young girl whose father died when she was little and she’s been made to be the scullery maid of her wicked stepmother and her two ugly stepsisters. I’ve seen this story many times both in films and as Christmas pantomimes.

But the most well-known version of ‘Cinderella’ has to be in the Disney animated feature film made in 1950. It still holds up today as a magical masterpiece, even if the film focuses on certain things like the supporting characters including the mice and the birds than on the romantic love tale for Cinderella.

Having seen this film again, I do find it a little silly in places. But it has a charming quality about it that currently holds today. It has been digitally restored for DVD as well as Blu-ray and it was the 12th animated classic in Disney’s long line of feature films for children and grown-ups to adore and enjoy.

There has been a live-action remake of ‘Cinderella’ made in 2015 which I liked when I saw it at the cinema. It’s nothing like the original animated classic and I wouldn’t like to dismiss the original because of that. I’m glad there are now two versions of ‘Cinderella’ that I can enjoy and appreciate.

The animation, like all Disney animated films, feels flawless and hard to criticise. You forget it’s a cartoon film because you feel for the characters and are compelled with the emotions of them. This is especially when Cinderella’s happy, upset or frustrated when so much is put on her for good or ill. 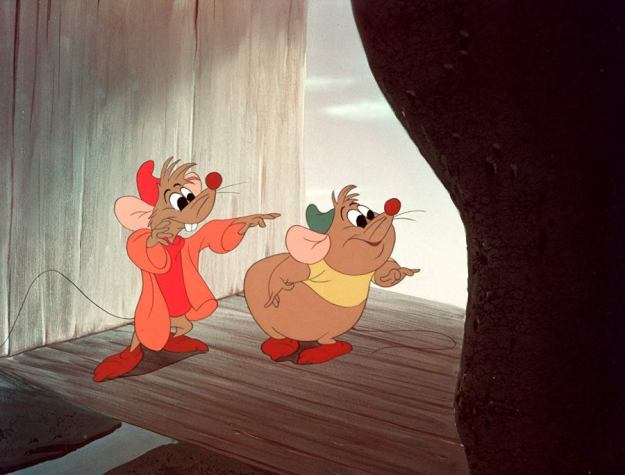 It’s actually interesting and unusual that Cinderella can communicate with birds and mice in her home when living with her stepmother and stepsisters and that she can understand them. Not sure how that works. I mean, the birds still tweet away but the mice seem to be understandable in talking English.

I enjoyed watching it when Jaq and Gus are helping Cinderella in getting ready for the ball and when they’re being chased around by Lucifer the cat. The Jaq and Gus scenes with Lucifer remind me a bit of ‘Tom and Jerry’ though with less violence. Gus is easily picked on by Lucifer as he’s the newcomer.

Yeah Jaq is of the experienced mice in the group along with the women mice whilst Gus is a new member to the family. Gus is dimmer than Jaq and gets easily excitable when he laughs and wants to have it out with someone like Lucifer or the evil ugly sisters from a distance. Jaq does stop Gus mind.

I found Lucifer funny as a feline character. He is Cinderella’s stepmother’s cat and wants to get his paws on the mice when he gets a chance. Thankfully Cinderella manages to save the mice from Lucifer and the mice manage to get away from him. Lucifer can be just as mean as Cinderella’s step-relations are.

It’s been indicated that more time is spent on the supporting characters rather than the main star and her love interest, the Prince. That is true, since the Prince barely gets enough screen-time as he should. The romance between Cinderella and the Prince is briefly handled and isn’t strong enough.

Cinderella does get enough screen time as she’s the main star of course. She seems a patient and kind-hearted individual, even when she gets frustrated with Lucifer at times and when her stepsisters and stepmother reduce her to low levels. She comes across as brave throughout the film.

The evil stepmother character is pretty scary, even for me when I was a kid watching this. She seems manipulative and in control when preventing Cinderella from being happy and making her daughters come to the forefront. It’s been claimed Cinderella’s evil stepmother is one of Disney’s best villains.

It’s not very clear what her motivations are for reducing Cinderella to being a scullery maid after her father died. But the mystery of her evil intentions makes her even more frightening. This is especially when the evil stepmother locks Cinderella in her room in the top of the tower so that she can’t get out.

This leads me onto talking about the ugly stepsisters, Anastasia and Drizella. Goodness me, these stepsisters have no chance with the Prince. Their attitudes and behaviours are appalling and they come across as stupid and mean-spirited. Even when trying Cinderella’s glass slipper, they’re horrid.

Whilst the Prince isn’t developed as a character in the film, most of the attention is given to the King and the Grand Duke who form an enjoyable double act. The King wants the Prince to get married so that he can have grandchildren whilst the Grand Duke is reluctant about getting the Prince married.

The film features many good songs and music throughout. As well as ‘Bibbidi-Bobbidi-Boo’, there are the songs ‘A Dream Is a Wish Your Heart Makes’; ‘Oh, Sing Sweet Nightingale’; ‘The Work Song’ and ‘So This Is Love’. ‘Bibbidi-Bobbidi-Boo’ got nominated for Best Original Song at the Academy Awards. 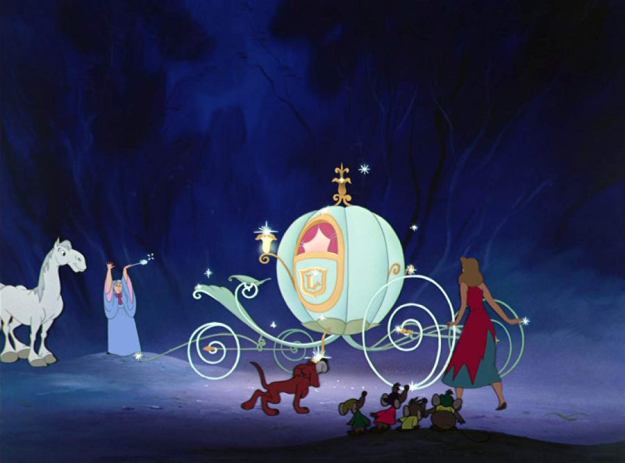 The DVD special features are as follows. On Disc 1, there are ‘Cinderella Stories’ presented by Espn Classic. There’s also ‘Music & More’ including two music videos of ‘A Dream is a Wish Your Heart Makes’ and ‘Every Girl Can Be A Princess’. These song versions are on Disney Channel music CDs.

On Disc 2, there are deleted scenes which include an introduction as well as two scenes never seen before in the movie. There’s also more ‘Music & More’ including ‘Cinderella and Perry Como’; the ‘Cinderella’ title song; unused songs and radio programs. There are also ‘Games and Activities’ including ‘House of Royalty’; ‘The Royal Life’ DVD-ROM Design Studio and ‘Princess Pyjama Jam’. There’s also ‘Backstage Disney’ which includes ‘From Rags To Riches: The Making of Cinderella’. There’s also ‘The Cinderella That Almost Was’; ‘From Walt’s Table: A Tribute To Disney’s Nine Old Men’; ‘The Art of Mary Blair’ and a storyboard to film comparison on the film’s opening sequence. There’s also ‘Cinderella’ galleries; 1922 laugh-o-grams of ‘Cinderella’; an excerpt from ‘The Mickey Mouse Club’ with Helene Stanley and theatrical trailers.

The classic Disney animated film of ‘Cinderella’ is wonderful to watch. It’s a silly film but it’s delightfully silly for kids and grown-ups to enjoy. I love watching it when seeing Jaq and Gus and the other mice, the birds and the animals assisting Cinderella to win the prince of her dreams throughout the film.

There are issues with the lack of a romantic story between Cinderella and the Prince as it does seem all love on first sight without any proper development. But I can forgive the film for that as it does feel magical especially through the music; the songs and well-made cartoon animation throughout.