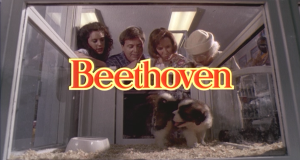 Welcome to the ‘Beethoven’ page on ‘Bradley’s Basement’.

In the 1990s when I was growing up, I enjoyed watching the ‘Beethoven’ movies. This included ‘Beethoven’ and ‘Beethoven’s 2nd’. These are family films about a 185 pound St. Bernard dog and his adventures with the Newton family. These films can be watched by all humans and dogs.

Since watching the first two ‘Beethoven’ films as a kid in the 90s, a lot has happened since then. Beethoven has had his own cult-following, appearing in more films beyond the first two and without the original cast. He’s had his own cartoon TV series and he’s appeared in video games.

I don’t know if I’ll review all the ‘Beethoven’ movies released on DVD so far. Who knows how many more films Beethoven will make? I’ll be adding my DVD reviews on the ‘Beethoven’ films as I go, starting with the first three movies from the 3 film box set owned by my parents and me.

Here is a list of my DVD reviews on the ‘Beethoven’ movies. Click on the links below to see and read my reviews.