Welcome to the ‘Thunderbirds’ page on ‘Bradley’s Basement’.

I’ve been re-living my childhood! – “THUNDERBIRDS ARE GO!”

Back in Christmas 2014, my parents got me the Complete Series of the original ‘Thunderbirds’ on DVD. I couldn’t be happier as I enjoyed this classic kids’ show as it was one of my viewing pleasures. ‘Thunderbirds’ is one of my favourite TV children’s shows when I was a kid. I loved every minute of it.

I loved everything about ‘Thunderbirds’ including the vehicles, the characters, Lady Penelope and his chauffeur Parker and of course the villainous Hood. I highly recommend this show to anyone who hasn’t seen it. This is a 1960s show wonderfully produced and created by Gerry and Sylvia Anderson.

This series uses the Supermarionation technique in their shows, which is a combination of model effects for the machines and puppets for the characters (I always thought they were real people 😀 ). Set in the year 2065, ‘Thunderbirds’ is a series about the Tracy family including Jeff and his five sons.

Jeff’s five sons are Scott, Virgil, Alan, Gordon and John. They live on Tracy Island and run a top secret organisation called International Rescue. Whenever called for help around the world, the Tracy brothers set off to the danger zone in the super-powered, highly-equipped Thunderbirds machines.

The Complete ‘Thunderbirds’ DVD collection is a 9-disc DVD set, containing all the ‘Thunderbirds’ episodes and all of the Super Features. I have many favourite episodes from the series as well as my favourite characters and Thunderbird vehicles. I’m sure there are favourites for you from this series. 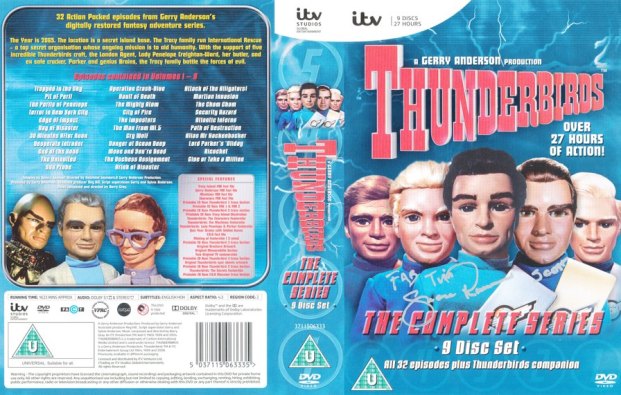 I’ve had the DVD cover of the Complete Series of ‘Thunderbirds’ signed by Shane Rimmer (who voiced Scott Tracy in the series) when I met him at the ‘Dimensions 2015’ convention in Newcastle, October 2015

Below is a list of my DVD reviews on the episodes and movies in relation to ‘Thunderbirds’.

Click on the links to see and read my reviews.