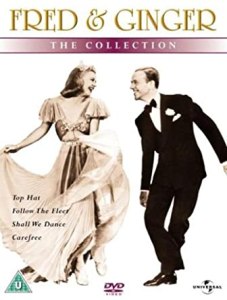 Fred and Ginger Face the Music and Dance 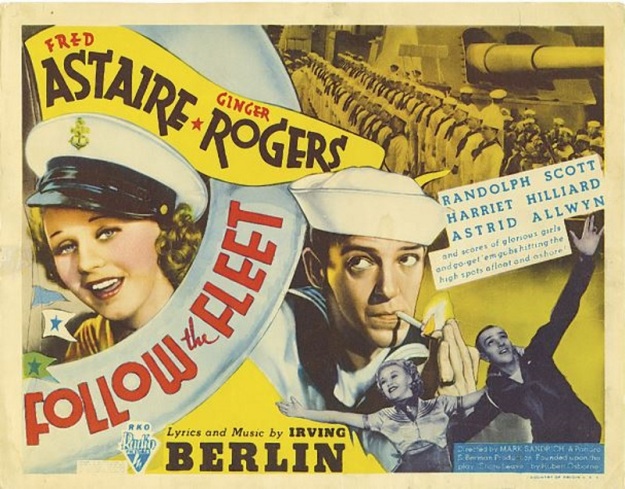 ‘Follow the Fleet’ is another fun film starring Fred Astaire and Ginger Rogers. It has a nautical theme with Fred Astaire as a sailor. It also has Fred and Ginger being happy to see each other at the start. 🙂

In the film, Fred Astaire as seaman ‘Bake’ Baker (that might be confusing to remember! 😀 ) goes on shore leave from his ship with navy buddy Randolph Scott as Bilge. They hope to have a superb time.

Whilst at a San Francisco ballroom called Paradise, Bake meets up with Ginger Rogers as Sherry. They were once dance partners and Bake had asked Sherry to marry him, to which she had declined.

Sherry is now working as a dance hostess at the Paradise. She also has a sister – Harriet Hilliard as Connie – who is easily attracted to Bake’s friend Bilge. Bilge also becomes attracted to Connie in this.

Although he wasn’t at first due to her dressed up like a music teacher (which she is) and having glasses on. When she’s dressed up to be pretty, Bilge instantly falls for Connie which was very sweet.

But when Connie is keen about marriage, Bilge gets put off by her and becomes interested in Sherry’s friend Astrid Allwyn as Iris. Bake also tries to get Sherry a better job than she already had. 😐

Bake’s attempts to get Sherry a new job costs her old ones and they often fall out during the film. Eventually, they work together and do a musical show to pay off a ship Connie had bought for Bilge.

The film’s story is rather sweet. Whilst Fred and Ginger are great together as a dancing couple, they also can be considered not the main romantic couple as the Bilge and Connie characters have that. 🙂

It’s also interesting to see how Fred and Ginger attempt to get Bilge and Connie back together without pushing it too much. Bilge is laid-back and quite aloof whilst Connie’s pretty mild-mannered.

Fred Astaire gets to shine once again in this film, being in sailor suit and all. As well as doing dance numbers, Fred also gets to do a piano solo for the number ‘I’m Putting All My Eggs in One Basket’. 🙂

This is before Fred and Ginger do ‘I’m Putting All My Eggs in One Basket’ as a song and dance number. These two do great song and dances, though ‘Let’s Face the Music and Dance’ had hiccups.

Like with the ‘Cheek to Cheek’ number in ‘Top Hat’, Ginger’s heavily-weighted dress had her doing swirling actions that hit Fred in the face. Oops! I’m surprised Fred and Ginger kept dancing after this.

Ginger also gets to do her own tap-dancing number as well as sing the song ‘Let Yourself Go’ before Fred meets up with her. It’s really amusing when Ginger couldn’t sing the song for an audition piece.

I did think it was mean-spirited of Ginger’s Sherry to get even with Fred’s Bake because he ruined her audition. It causes him to get in trouble with an officer who isn’t wearing standard sailor clothes.

Randolph Smith as Bilge Smith gets promoted in the ranks as Chief Petty Officer in the film. He almost arrests Fred’s Bake character, but is persuaded when hearing the circumstances over Connie.

Harriet Hilliard as Connie – who seems a lovely girl – gets her own song number which is ‘Get Thee Behind Me Satan’. It’s amusing the song was censored in England in film at cinema because of Satan.

There isn’t much to say about Astrid Allwyn as Iris Manning whom Bilge falls for instead of Connie. She’s a divorced socialite and a friend of Sherry’s. She also takes part in this ‘gag’ by Bake for Bilge. 🙂

The other song numbers in the film include ‘We Saw The Sea’. I found that funny when the song goes “And what did we see? We saw the sea”. There is also ‘I’d Rather Lead a Band’ sung by Astaire.

Harriet Hilliard also sings ‘But Where Are You?’ as she longs for Bilge to be the main in her life. The singing and the dancing by the extras in these movies are still very good along with Fred and Ginger.

‘Follow the Fleet’ is a fun, nautical musical movie with Fred and Ginger. The romance stories were nice to sit through and the songs and music by Irving Berlin were very nice to enjoy throughout here.

The DVD special features are as follows. On the ‘Follow the Fleet’ disc for ‘The Fred & Ginger Collection – Volume 1’ DVD box set, there’s a special introduction for the film by Fred Astaire’s daughter Ava Astaire McKenzie. There are also production notes by film historian Ken Barnes; cast and crew notes and a photo gallery for ‘Follow the Fleet’.

On the ‘Follow the Fleet’ disc in ‘Astaire and Rogers: The Complete Film Collection’ DVD box set, there’s the featurette ‘Follow the Fleet: The Origins of Those Dancing Feet’; the musical short ‘Melody Master: Jimmie Lunceford and His Dance Orchestra’; the classic cartoon ‘Let It Be Me’ and a theatrical trailer for the film.