Bing as a Priest and Ingrid as a Nun

It’s time for the second film to feature Bing Crosby as Father O’Malley – ‘The Bells of St. Mary’s’. This is a sequel to the 1944 film ‘Going My Way’. Whilst it might be slow-paced, the film is very pleasant.

Released in 1945 and once again directed by Leo McCarey, ‘The Bells of St. Mary’s’ stars Bing Crosby alongside Ingrid Bergman playing a Catholic nun. It was surreal to see these two appearing together. 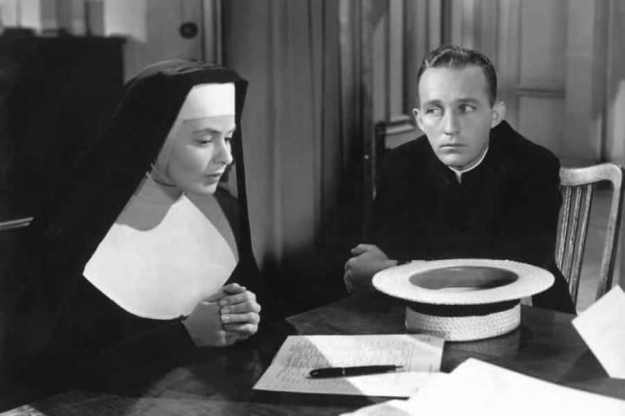 I enjoyed Ingrid Bergman’s performance as a Catholic nun. The drama between her and Bing Crosby’s scenes was mesmerising to watch and the two seemed to work well together in this film. 🙂

I found one moment very funny in the film where Father O’Malley was making a speech to the sisters and they were laughing at the cat playing with his straw hat on the mantelpiece. It’s so funny.

It’s fascinating to watch ‘Going My Way’ and ‘The Bells of St. Mary’s’ as two films featuring Bing Crosby as a priest. In many ways, there’s not enough musical numbers going on throughout the film.

The songs that feature in this movie include ‘Aren’t You Glad You’re You?’, ‘Adeste Fideles’, ‘In the Land of Beginning Again’, ‘O Sanctissima’, ‘It’s Spring’/’Vårvindar Friska’ and ‘The Bells of St. Mary’s’.

Most of these songs have religious connotations in them and don’t have any jazzy feels to them. Usually that’s what you expect with a Bing Crosby movie, so it is fascinating not to find it in this film.

I like how Bing Crosby forms a connection with the sisters and the children at St. Mary’s school. He helps a young girl named Patsy who struggles with family life and wants to graduate from the school.

Ingrid Bergman has a nice interaction with Bing’s character. I like how her character swoons to his ways when running a school. She even helps a boy how to defend himself in a fight which was funny. 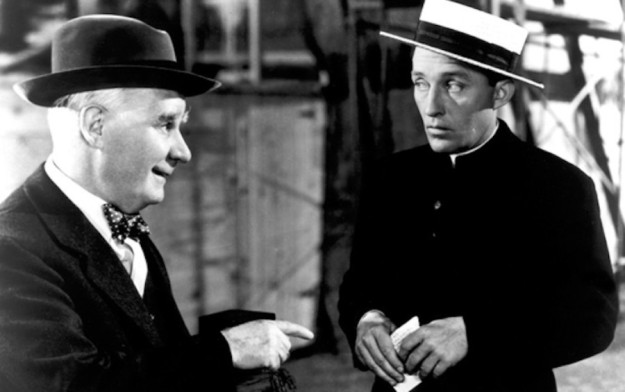 As well as Bing and Ingrid, the film features Henry Travers as Horace P. Bogardus. Henry Travers later played an angel in ‘It’s a Wonderful Life’. Mr. Bogardus could be the key to securing St. Mary’s future.

I found it funny when Mr. Bogardus was followed into a church by a dog after having saved its life. At this point in the film, Bogardus has a change of heart. He was keen to have St. Mary’s school closed.

There’s Ruth Donnelly as Sister Michael, Rhys Williams as Dr. McKay, Una O’Connor as Mrs. Breen and her son Richard Tyler as Eddie. I’m so surprised not more nuns got more attention in this movie.

I’m curious about why Frank McHugh’s character of Father Timothy O’Dowd from the ‘Going My Way’ film didn’t appear in ‘The Bells of St. Mary’s’. He could’ve connected both films more strongly. 🙂

The director Leo McCarey got nominated for Best Director in the film. Amazing how this movie was considered very popular in its time in the 1940s. It’s a contrast to how movies are being rated today.

I like how the film ends with Bing Crosby’s Father O’Malley reassuring Ingrid Bergman’s Sister Mary that she’s a ‘perfect person’ despite having early stages of TB. She smiled happily once hearing that.

By the way, I really liked the Christmas Nativity play that was performed by the little children with Bing and Ingrid’s characters watching. It makes me feel like I’m looking forward to Christmas again. 🙂

‘The Bells of St. Mary’s’ is a pretty sedate film, but it’s very pleasant to watch. I liked Bing Crosby and Ingrid Bergman’s performances in the film and it is a movie that I won’t forget about in a hurry here.