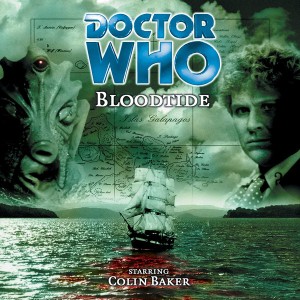 More Beneath The Surface – The Return of the Silurians

This is four-part story on a 2-disc CD set and it features Colin Baker’s Doctor with Evelyn Smythe!

‘Bloodtide’ was an interesting audio listening experience. I enjoyed listening to this audio drama, but I wouldn’t call it a favourite of mine. This is a Big Finish story of ‘Doctor Who’ made in 2001. The story is by Jonathan Morris who is a great ‘Doctor Who’ writer and it also features the return of the Silurians.

The Silurians have featured in stories from the classic series of ‘Doctor Who’, which you can see via the ‘Beneath the Surface’ DVD box set, as well as from the new series. For a time, ‘Bloodtide’ was the only ‘Doctor Who’ audio by Big Finish to feature the Earth reptiles before ‘The Silurian Candidate’ came.

I’ve enjoyed the Silurian ‘Doctor Who’ stories by Malcolm Hulke from the 1970s. They depict reptiles in moral dilemmas with humans. Jonny Morris takes this approach in a different way by doing a story about evolution and revelations regarding human history which I don’t entirely agree while hearing it.

In the story, the Sixth Doctor and Evelyn arrive on the Galapagos Islands in 1835. The Doctor has a surprise for Evelyn. They meet Charles Darwin, famous naturalist and geologist on evolutionary theory. Meanwhile, jail prisoners get abducted whilst a group of Silurians are about to be reawakened.

I’ve enjoyed Jonathan Morris’ stories in ‘Doctor Who’. I especially like how he manages to mix in a historical adventure with Silurians. But I wasn’t happy with the evolution themes in this. Some ideas are interesting, but I cannot accept that we humans were created by a Silurian who claims to be ‘God’.

I’ve enjoyed Colin Baker as the Doctor who fits in well to the ‘Doctor Who’ audio medium and is getting stronger character development compared to the TV series. He knows Charles Darwin already and gets on well with Evelyn. I do like how the Doctor doesn’t take sides on evolution as he’s open-minded.

Maggie Stables stars as Evelyn Smythe, the Doctor’s companion in this audio adventure. ‘Bloodtide’ is Evelyn’s fourth ‘Doctor Who’ story and she has already settled in the TARDIS. She’s delighted when she meets Charles Darwin and she gets to share some scenes with him when separated from the Doctor.

Miles Richardson delivers a good performance as Charles Darwin in this audio adventure. I don’t really know much about Darwin, apart from that he came up with his evolutionary theories on natural selection. I don’t really agree with Darwin’s theories and his atheist views are strongly depicted in this.

I enjoyed the history prologue at the beginning of the story that depicts Tulok on trial for his crimes by the Silurian ‘magistrates’. I found it shocking when it turns out the Silurians eat humans! That’s horrible! In this, the Silurians attempt to release another bacteria/disease as before in their first story.

There’s also an adult Myrka that appears in this audio adventure. The Myrka was a pet monster of the Silurians that appeared in ‘Warriors of the Deep’. The Myrka was rather pathetic on TV. But on audio, the Myrka sounds pretty impressive and is scarier as a ‘Doctor Who’ monster in ‘Parts Two and Three’.

However, I did find ‘Bloodtide’ to be a ‘Doctor Who’ story lacking in terms of action. With ‘Doctor Who and the Silurians’ and ‘The Sea Devils’, there was a more pacier feel to those stories. With this one, I couldn’t find so much action in it as I felt this story was rather overshadowed by the evolution themes.

The CD extras are as follows. At the end of Disc 2, there is a trailer for the first two episodes of the first ‘Dalek Empire’ series including ‘Invasion of the Daleks’ and ‘The Human Factor’. 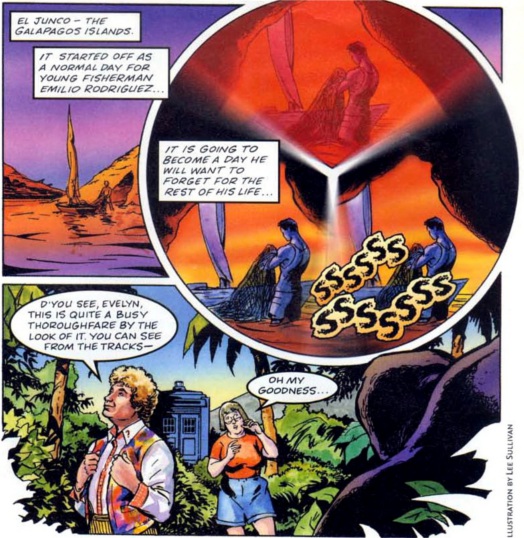 I’ve enjoyed ‘Bloodtide’ in a strange kind of way way, but it’s not a favourite of mine. It was nice to hear the Silurians and Colin Baker as the Doctor with Maggie Stables as Evelyn Smythe. But the evolution theme and Charles Darwin rather spoilt it and this didn’t make it a proper Silurian adventure.