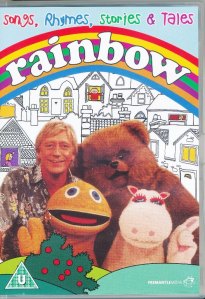 I’ve had a nostalgic Christmas present this year! Let’s talk about ‘Rainbow’, the children’s TV series. I used to watch ‘Rainbow’ on VHS back in the day when I was a kid in the 1990s. The original show ran from 1972 to 1992, although it’s more likely that I watched episodes of ‘Rainbow’ from the 1980s. 😀

Recently, I’ve had the ‘Rainbow’ DVD called ‘Songs, Rhymes, Stories & Tales’. This features a compilation of four ‘Rainbow’ episodes, all from the 1980s, I believe. They include ‘Rumpelstiltskin’, ‘The Ugly Duckling’, ‘The Hare and the Tortoise’ and ‘Sing-a-long’. I really enjoyed watching the DVD!

Gosh, I sound like a big kid, don’t I? 😀 ‘Rainbow’ featured memorable characters I used to love watching on VHS including Geoffrey Hayes who presented the show, along with Bungle the Bear, Zippy and George. They were often joined by the singing group Rod, Jane and Freddy in many episodes. 😀

Bungle the Bear was often a guy in a bear’s suit. In the episodes I saw, Bungle was often played by Stanley Bates. Did you know that John Leeson, the original voice of K-9 in ‘Doctor Who’, played Bungle Bear before Stanley Bates? I had no idea this was the case before I became a ‘Doctor Who’ fan.

I loved watching Zippy and George. Zippy was a loud, domineering and funny puppet with a zip on his mouth whilst George was a pink, shy, friendly hippo. Like many people, I wasn’t sure if George was a boy or a girl. I’m sure that he’s a boy, but then again George in ‘The Famous Five’ was a girl, right?

It was lovely to revisit ‘Rainbow’ in this DVD compilation I had for Christmas 2020. I enjoyed the ‘Rumpelstiltskin’ story, especially when Zippy played the titular character himself. How he shrunk to a little size, I don’t know? 😀 It was also fun when Rod, Jane and Freddy participated during the tale! 😀

‘The Ugly Duckling’ was equally fun, especially when George played the titular duckling that became a swan. It was a surprise to hear Rod, Jane and Freddy singing ‘The Ugly Duckling’ song that I’ve heard from the ‘Hans Christian Anderson’ 1952 film starring Danny Kaye. I’ve heard that song often!

‘The Hare and the Tortoise’…or ‘The Tortoise and the Hare’ ( 😀 ) was equally enjoyable, especially when George was playing the tortoise and Zippy was playing the hare. I like how the ‘Rainbow’ team explained the moral of the story for the younger viewers watching as good children’s shows do that.

‘Sing-a-long’ featured Geoffrey, Bungle, Zippy, George, Rod, Jane and Freddy singing a lot of songs, mostly nursery rhymes, and explaining what it means to ‘sing-a-long’ in a group. The songs/nursery rhymes includes ‘Humpty Dumpty’, ‘Incy Wincy Spider’ and ‘Old MacDonald’. It was a lot of fun here.

It was lovely to revisit ‘Rainbow’, a children’s show I haven’t seen in a while since viewing it on VHS. It’s amazing how time has flown by since I watched that show, but I still hold fond memories of watching it, especially with Geoffrey, Bungle, Zippy, George, Rod, Jane and Freddy in it. Happy times indeed! 😀

Who knows? Maybe I’ll check out some more ‘Rainbow’ videos on YouTube! 😀