A Sontaran in Dartmoor

Dartmoor…or is it Trafalgar Square in London? I’m not sure. ‘The Sontaran Experiment’ is a two-part adventure featuring one Sontaran! It’s the only two-part story to feature in the Tom Baker era of ‘Doctor Who’. There would not be another two-part story for a long time until the Peter Davison era.

‘The Sontaran Experiment’ is something quite enthralling; entertaining and compelling as a ‘Doctor Who’ story. I wouldn’t class it as one of my favourite stories from the Tom Baker era of ‘Doctor Who’ and the classic series overall. But it’s a nice little adventure to have with one Sontaran featured in it.

This two-part story is by Bob Baker and Dave Martin (also known as the Bristol boys). They’d written a number of ‘Doctor Who’ stories for the Jon Pertwee era including ‘The Claws of Axos’, ‘The Mutants’ and ‘The Three Doctors’. This is the first occasion the duo has penned for the Tom Baker era.

Incidentally, the director of this story, Rodney Bennett, also directed ‘The Ark In Space’ in the same production block for this season. This was the same for director Christopher Barry with ‘The Rescue’ and ‘The Romans’. This saved time in making a studio-bound story and a location story at the same time.

Set in the far future, the Fourth Doctor; Sarah Jane Smith and Harry Sullivan arrive on the planet Earth, following the events of ‘The Ark In Space’. They don’t expect to find anyone about on the planet, as the Earth has been left abandoned in fear of the approaching solar flares many years ago.

But the Doctor, Sarah Jane and Harry soon find what is left of the human race as they turn out to be terribly tortured and on the run from a Sontaran Field Major called Styre. Styre is conducting terrible experiments on the humans in preparation for a Sontaran invasion fleet coming to our planet Earth.

I did find the idea of a Sontaran Field Major experimenting on human subjects for military purposes intriguing and disturbing. The fact that Styre is testing the humans’ limits before allowing a Sontaran invasion fleet to invade the Earth is very frightening and is compelling to watch in just two episodes.

I believe Kevin did a fine job bringing back the Sontaran strength and menace back into Styre just as he did for Linx in ‘The Time Warrior’. Sadly Kevin Lindsey wasn’t feeling very well during the making of this story, since he had a bad heart condition and he died shortly after playing Styre, which is sad.

With that said, I’m not a big fan of the Sontaran make-up featured in ‘The Sontaran Experiment’. It’s grey and pale compared to the brown, warty look in ‘The Time Warrior’ which I prefer. Despite Styre saying to Sarah Jane that Sontarans are ‘identical, yes; the same no’, I’d strongly dispute about that.

Again, the fact that this story was filmed on location makes it quite fast-paced and gripping to see. The Dartmoor landscape provides an atmospheric quality to ‘The Sontaran Experiment’ when the Doctor; Sarah Jane and Harry tread through rugged terrain in encountering Styre and other humans.

Our three main heroes do get separated from each other in the story, especially when trying to find out what’s going on with the Earth abandoned and why the transmat system to the Nerva beacon in ‘The Ark In Space’ isn’t working properly. They encounter many horrors while searching planet Earth.

I enjoyed Tom Baker’s performance as the Doctor in the story. The Doctor fares well, especially when he’s discovering more about what’s going on the planet Earth and when he fights Styre in single combat during ‘Part Two’. That was a pretty exciting scene to watch in the story’s climax here. 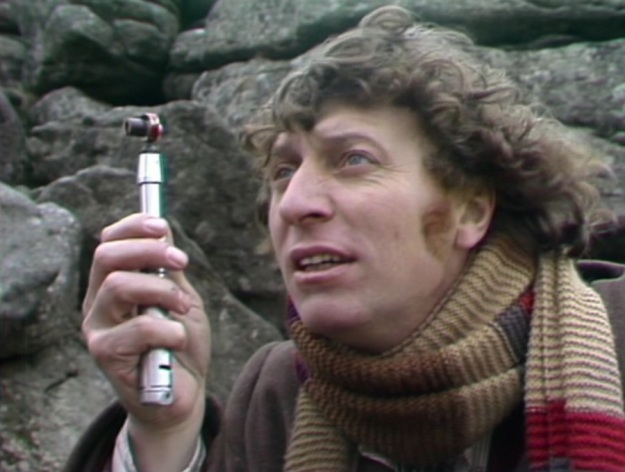 Tom injured his collarbone by accident when making this story on location. Behind-the-scenes, there was a fear that Tom Baker may not be able to reprise his role as the Doctor again. Thankfully it wasn’t too serious and stuntman Terry Walsh took over for most of the fight scenes with the Doctor.

I also enjoyed Elisabeth Sladen as Sarah Jane Smith in the story. The moment where Sarah Jane sees and meets Styre for the first time was pretty exciting and tense. She easily mistakes Styre for being Linx and it was very heart-stopping to watch when she saw a monster she encountered once before.

I found the scenes where Sarah Jane gets experimented upon by Styre terrifying. Lis Sladen does well in showing how terrified Sarah Jane is when reacting to certain fears planted by Styre. I like the chemistry formed between her and the Doctor and when she acquires his sonic screwdriver for him. 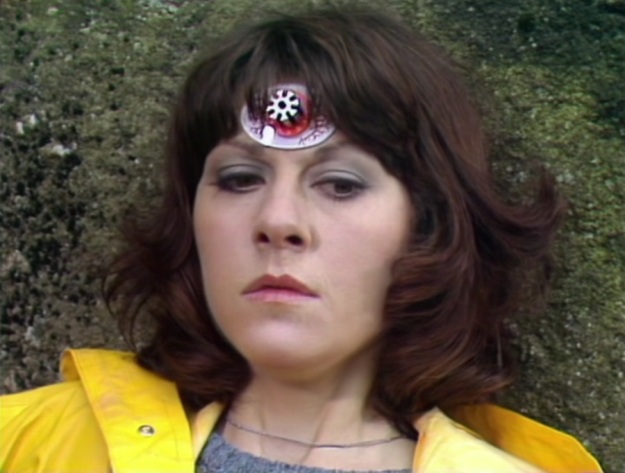 Ian Marter does really well as Harry Sullivan in this story. It was pointed out in the making-of documentary on Blu-ray that Harry has some P.G. Wodehouse-like mannerisms about him. That was pretty interesting to discover. I think it would have worked well for him as a companion in the show.

In this story, Harry gets to be very heroic as well as climbs up lots of cliffs. I did enjoy the scenes between him and Sarah Jane. Sometimes Harry gets on Sarah Jane’s nerves by calling her ‘old thing’. But by this point, the two like each other as it shows in the working relationship between the actors.

As well as Styre, there are also some human characters from a GalSac colony world that came to Earth via a spaceship to investigate a fake distress call. They seem to be a military expedition and the human characters speak with South African accents. Okay. There’s a very intriguing, unusual aspect.

The GalSac colonists include Donald Douglas (who was in the 1970s BBC version of ‘Poldark’) as Vural; Glyn Jones (who previously wrote ‘The Space Museum’ with William Hartnell) as Krans and Peter Walsh as Erak. There’s also Peter Rutherford as Roth and aforementioned Terry Walsh as Zake.

The story also features a peculiar robot drone created and built by Styre to capture humans on Earth. I wouldn’t call it a grand piece of design work by the ‘Doctor Who’ production team. Bob Baker and Dave Martin hoped to use it for a future ‘Doctor Who’ story. Thankfully it was not reused. 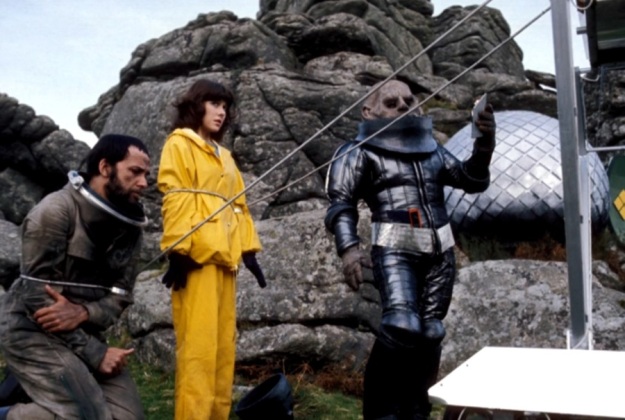 The original DVD special features were as follows. There was the ‘Built For War’ documentary with behind-the-scenes cast and crew interviews focusing on the development of the Sontarans in the original TV series. I wish this documentary was updated for the new series and the Big Finish audios. There was a photo gallery of the story; a stereo sound audio mix option for the story and a DVD audio commentary with Eisabeth Sladen, producer Philip Hinchcliffe and co-writer Bob Baker. There was also an info-text commentary option to enjoy.

On Disc 3 of the ‘Doctor Who – The Collection – Season 12’ Blu-ray, the ‘Built For War’ documentary; the stereo sound audio mix option for the story; the DVD audio commentary and the info-text commentary option can also be found on there. The photo gallery for ‘The Sontaran Experiment’ has been updated for 2018 on the Blu-ray.

The new special features on Blu-ray include the making-of documentary, ‘Like Nothing On Earth’, with cast and crew interviews. There’s also the ‘Behind the Sofa’ feature on ‘The Sontaran Experiment’ with Tom Baker (the Fourth Doctor); Sadie Miller, Elisabeth Sladen’s daughter and producer Philip Hinchcliffe as well as Louise Jameson (Nyssa); Janet Fielding (Tegan) and Sarah Sutton (Nyssa). There’s a location report and the ‘On Target: Ian Marter’ documentary that’s taken from the ‘Carnival of Monsters’ 2-disc Special Edition DVD. And there’s ‘The Tom Baker Years: Part 1’ and ‘The Tom Baker Years: Part 2’ programmes – originally released on VHS; now on Blu-ray for the first time.

On the PDF front, there are production documents; scripts and the ‘Radio Times Listings’ of the story. You need a special Blu-ray computer drive for that.

Like I’ve said before, ‘The Sontaran Experiment’ doesn’t rank as one of my favourite ‘Doctor Who’ stories from the Tom Baker era. But it’s still an enjoyable adventure and I wouldn’t dismiss it entirely since it has merit and makes for an intriguing, unique take on the Sontarans in a really disturbing manner.

I found how good the Fourth Doctor, Sarah Jane and Harry were. By this point, they seemed to be working well as a TARDIS trio. Where would they go next and would they get back to the TARDIS or not? They’ll soon be entering into dangerous territory belonging to one of the Doctor’s greatest foes.

4 thoughts on “‘The Sontaran Experiment’ (TV)”