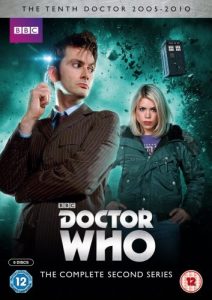 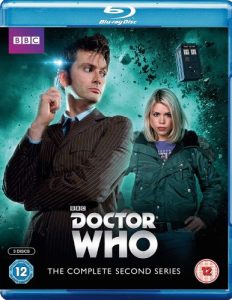 “Exterminate!!!”/”Delete!” – Daleks vs. Cybermen at Torchwood 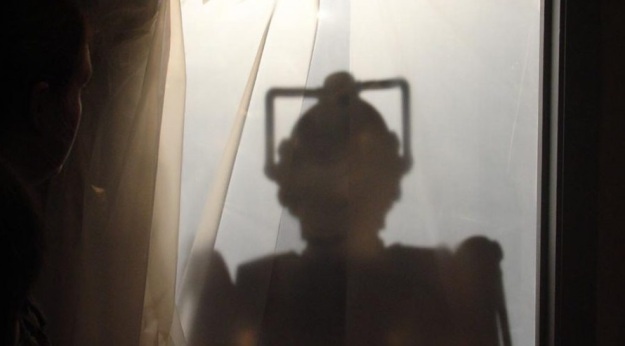 This is one of the best series finales and one of my favourite stories in new ‘Doctor Who’! It contains two of my favourite monsters – the Daleks and the Cybermen in their biggest battle yet! It also features a moving farewell for Rose Tyler as it turns out this story of how she ‘died’ in ‘Doctor Who’.

I remember when this story came out that there were two big ‘Radio Times’ covers featuring the Daleks and Cybermen playing football which also promoted the World Cup Final at that time in 2006.

The story begins with a prologue/monologue by Rose who reflects on her time with the Doctor. It’s a nice way to start and a nice tribute to a companion who was there when the show returned in 2005.

Rose, with the Doctor, returns home to meet up with her mum. I’m glad we came back to the Tyler’s residence for one last time. It was where it started for new series ‘Doctor Who’ with Rose and Jackie!

But all is not as it seems as something strange is happening. Lately in London and the whole world, there are ‘ghosts’ walking about the place. But nobody is freaked out as they’re excited and pleased.

The Doctor is not happy and suspects there is something more to this than people know. To investigate what’s happening, the Doctor and Rose do ‘ghost-busting’ that takes them to Torchwood Tower at Canary Wharf. 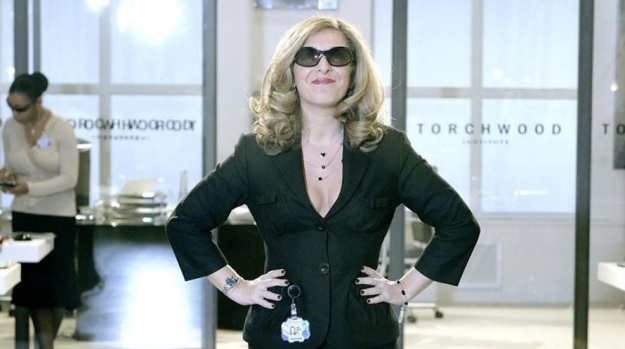 Torchwood is an institute that investigates aliens and does it in defence for the good of the British Empire. It was founded by Queen Victoria, following the werewolf incident during ‘Tooth and Claw’.

I really enjoyed David Tennant’s Doctor in this. He’s into the role and revels in playing it. He gets on well with Rose and I love his scenes with Yvonne when he’s challenging her on her Torchwood ideals.

Billie Piper is tremendous as Rose. She gets to do a lot when she bluffs as a member of Torchwood staff. I liked the scenes that Rose has with her mum Jackie and reflects on her time with the Doctor. 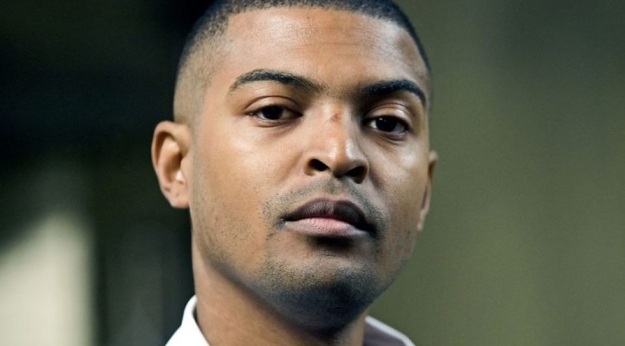 Noel Clarke returns as Mickey Smith is in this! Hang on! Mickey is in this?! How did he get there?! Last time we saw him…well, you’ll have to find out what happens as you go through these episodes.

Camille Coduri returns as Jackie Tyler and she gets to travel in the TARDIS, accusing the Doctor for kidnapping her. I loved it when the Doctor says that Jackie’s ‘not been the best companion he’s had’.

In this episode, we meet Tracy-Ann Oberman as Yvonne Hartman, leader of Torchwood. Yvonne is a sassy, confident and sharp person who knows her stuff about the Doctor. She’s quite friendly at first. 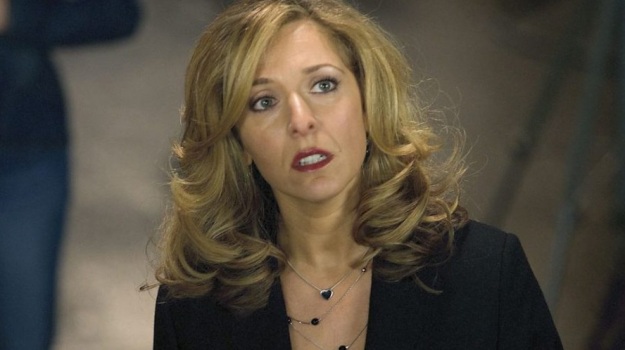 Pretty soon, a premature ghost shift starts. The Cybermen soon march out of hiding as they order the ghost shift to be increased to 100%. All of these ghosts are Cybermen as they conquer the world.

Down below the vault, a sphere called a void ship begins to open! Rose, Dr. Singh and Mickey are down there as something comes out. Four Daleks then rise and advance with cries of “Exterminate!”

The DVD special features on this episode on ‘The Complete Series 2’ DVD are as follows. On Disc 5, there’s a commentary with Noel Clarke; Tracy Ann-Oberman and Raji James. On Disc 6, there’s the ‘Doctor Who Confidential’ episode ‘Welcome to Torchwood’. 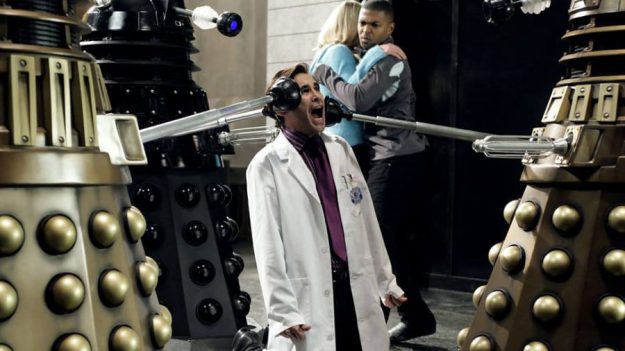 Rose shouts to the Daleks, calling them by name. The Daleks stop and decide to keep Rose; Mickey and Singh alive. They’ve brought a strange container called the Genesis Ark and want to activate it.

Meanwhile, the Cybermen attack the world as there’s battle sequences between Earth soldiers and Cybermen. The Daleks brutally kill Dr. Singh and gather information on Earth with their sucker sticks.

My favourite moment is when the Daleks and Cybermen actually meet. There’s that logical impasse as they demand to know who they are and it is exciting to see these two robot-like creatures meet.

I liked it when the Daleks and Cybermen make comparisons with each other. The Cybermen offer the Daleks an alliance to combine forces. But the Daleks refuse, starting hostile frictions between them.

The Cybermen convert the Torchwood staff, including Yvonne Hartman. She’s traumatised by this as she walks into the conversion chambers declaring her oaths, “I did my duty for Queen and country!”

There’s the return of Andrew Hayden-Smith as Jake Simmonds and Shaun Dingwall as Pete Tyler, Rose’s dad. They last appeared ‘Rise of the Cybermen’/’The Age of Steel’ and want the Doctor’s help. 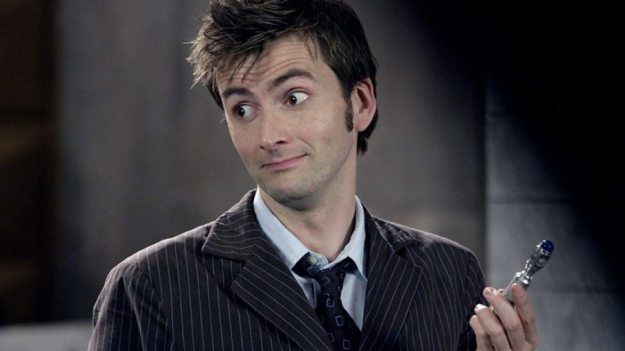 The Doctor gets to rescue Rose and Mickey and meets the four Daleks who are the Cult of Skaro. They escaped the Time War in order to survive before their kind and the Time Lords were destroyed.

The Battle of Canary Wharf takes place as the Daleks and the Cybermen fight each other in the Torchwood Tower. They chant battle cries of “Exterminate!”/”Delete!” which was so exciting to see.

Soon the Daleks have the Genesis Ark in the sky and they open it. Out from the Ark come millions of Daleks as they begin to exterminate all life-forms below including humans as well as the Cybermen. 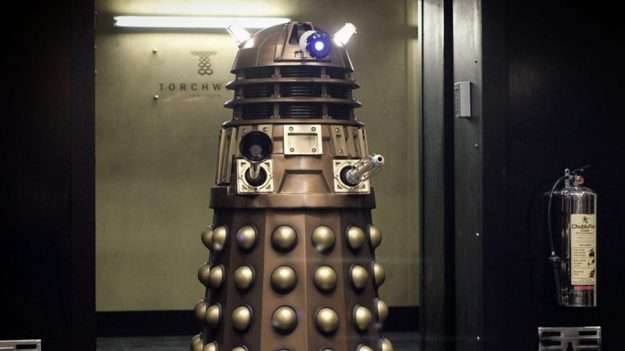 But the Doctor already has the answer for defeating the Daleks and Cybermen and pulling them back into the void. But this means Rose has to go to the parallel world, something which she is not having.

Rose stays with the Doctor as they open the breach to pull the Daleks and the Cybermen in. But at a cost, Rose sacrifices herself and gets pulled into the void before Pete rescues her back into his world.

It was heart-breaking for Rose to be taken so abruptly from the Doctor. It brought me to tears when I saw it on TV. The moment where the Doctor and Rose press their faces to the walls was so moving. 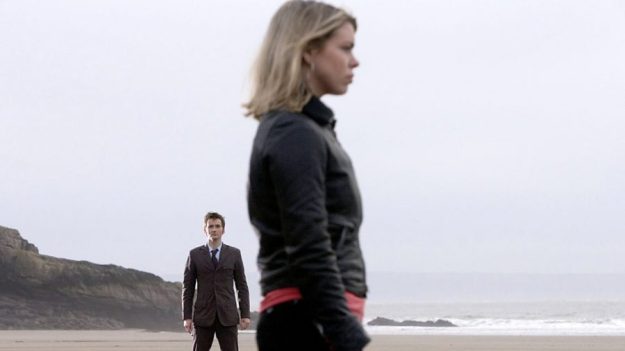 Months later in the parallel universe, Rose reunites with an image of the Doctor on beach in Norway. The Doctor says goodbye to Rose. She tells him she loves him before he vanishes from her forever.

I was emotionally drained when watching Rose’s departure in this story, since she was my first ‘Doctor Who’ companion. The Doctor’s emotionally drained too as he’s lost Rose forever. But the Doctor has to keep moving forward as he walks around the console and sets for his new destination.

Suddenly there’s a bride standing in the TARDIS at the end of the story. How did she get there?! Where did she come from?! The Doctor can’t believe it. I can’t either! Who is she?! What’s it about?!

The DVD special features on this episode on ‘The Complete Series 2’ DVD are as follows. On Disc 5, there’s an in-vision commentary with David Tennant and Billie Piper. On Disc 6, there’s the ‘Doctor Who Confidential’ episode ‘Finale’.

On Disc 6 of ‘The Complete Series 2’ of ‘Doctor Who’, all thirteen episodes of ‘Doctor Who: Confidential’ for Series 2 are there. There are also ‘David Tennant’s Video Diaries’. These are very enjoyable and in-depth looks on the making of Series 2 of ‘Doctor Who’ from David’s point-of-view.

‘Army of Ghosts’/’Doomsday’ is a great ‘Doctor Who’ series finale featuring Daleks and Cybermen as well as Rose’s departure. The series finale is well-written by Russell T. Davies and is well-directed by Graeme Harper. This is a ‘Doctor Who’ story that you don’t want to miss out on! I promise you that!