This, in my opinion, is the best film adaptation of ‘Charlie and the Chocolate Factory’ by Roald Dahl!

‘Charlie and the Chocolate Factory’ is one of the best children’s books by Roald Dahl, published in 1964. It’s a great story about a young boy named Charlie Bucket who becomes lucky when he wins one of five golden tickets and gets to meet Mr. Willy Wonka at his chocolate factory full of wonders.

Over the years, many adaptations of this book have been made. This includes the 2005 film directed by Tim Burton, starring Johnny Depp as Willy Wonka and the 2017 animated adaptation of the Gene Wilder ‘Willy Wonka & The Chocolate Factory’ film that features Tom and Jerry. Seriously, WHAT?!!!

There’s also been a stage musical of ‘Charlie and the Chocolate Factory’ performed in London’s West End from 2013. But the one film adaptation that springs to mind and is well-known to many people is the 1971 movie starring the aforementioned Gene Wilder – ‘Willy Wonka & The Chocolate Factory’.

I have vivid memories of seeing this movie as a kid at school. It’s stayed with me for most of my life as being one of my favourite children’s films. I prefer this over other film adaptations despite it being made before I was born. All of its magic and wonder shine throughout as it is such a timeless classic. 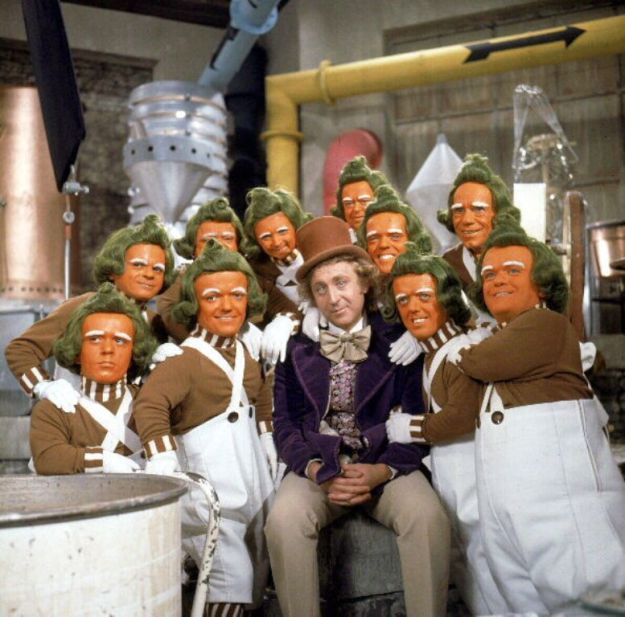 This has led to Roald Dahl actually disowning the film. Apparently Roald Dahl didn’t like some of the changes made to the script when he first wrote it. He didn’t like the musical numbers featured in the film; Slugworth as the ‘villain’ and he criticised the film’s focus more on Willy Wonka than on Charlie.

This is a shame as I look back with fond memories of watching ‘Willy Wonka’ as a kid and find it a good film. I mean, yes there have to be changes made into adapting from a book to film and not everything in the film makes total sense. But as a film, this is far superior compared to the 2005 film.

Originally, my parents and I purchased the DVD of ‘Willy Wonka & The Chocolate Factory’ back in 2001 when we were getting new to having DVDs. Now we have the movie on Blu-ray and can enjoy it more with special features that weren’t included on the original DVD release. Shockingly appalling!

So what is it about ‘Willy Wonka & The Chocolate Factory’ that makes me like it as a film and consider it as the best film adaptation from Roald Dahl’s book? Well, I suppose the best place to start is to talk about the story. As I said, this movie is about Charlie Bucket who becomes a lucky boy.

Okay, I suppose you’re asking why is this film called ‘Willy Wonka & The Chocolate Factory’ and not ‘Charlie and the Chocolate Factory’ as it was in the book. Well, the reason is: marketing. You see the filmmakers were also promoting a new chocolate bar whilst also making the movie at the same time.

The film’s producer David L. Wolper was introducing a new chocolate bar with Quaker Qats Company at the same time director Mel Stuart asked to make the film on the request of his then ten-year old daughter. With it being Willy Wonka, they named the new chocolate bar – a Wonka Bar. 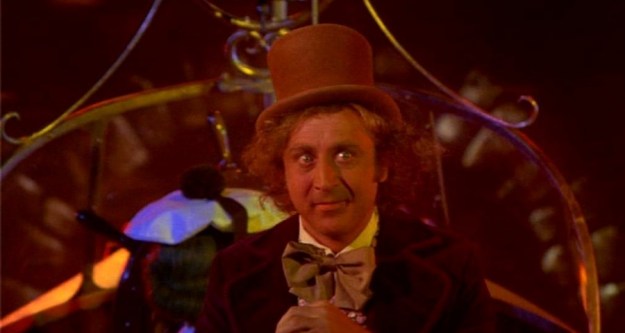 I know that seems unusual considering that the story’s about Charlie and not Willy Wonka. But it makes sense somehow especially if they were promoting Wonka Bars at the same time they were making the film. And hey, at least it makes it convincing that Wonka Bars were being sold back then.

But yeah, the story has Charlie getting caught in the world of Willy Wonka’s chocolate-making success. Wonka has had his chocolate factory closed for some time now before he then decides to have five children visit his factory and he places five golden tickets in Wonka Bars for people to find.

Charlie becomes one of the five lucky winners as he finds a golden ticket by chance in a Wonka Bar. He with the other four children, Augustus Gloop; Veruca Salt; Violet Beauregarde and Mike Teevee get to experience Wonka’s wonders at his chocolate factory. Will Charlie get a huge reward though?

Gene Wilder stars as Willy Wonka in the film. I love Gene Wilder’s performance as Mr. Wonka. He can be eccentric yes, but he has a charm and generosity that was fun to watch. It’s a pretty believable performance especially as he shows things around the factory and interacts with the kids.

It takes a while for Willy Wonka to appear in the film as he more or less appears in the second half. But by the time he appears, he’s into his own as Gene Wilder relishes the dark and light-hearted aspects to the character. You’re never sure whether he’s mad or serious as he can be unpredictable.

Peter Ostrum stars as Charlie, the hero of the movie. Charlie comes from a poor family background but has a loving family in his mother and his two sets of grandparents. He gets on well with his Grandpa Joe and he’s in great awe when he eventually gets to visit Willy Wonka’s chocolate factory.

The performance by Peter Ostrum in the movie is believable and relatable to watch. I like how his journey progresses from wanting to win a golden ticket; to thinking he’s missed out to eventually getting a second chance and winning. But can Charlie win the heart and approval of Wonka himself?

Jack Albertson stars as Grandpa Joe, who I think is really good in this film. Grandpa Joe looks out for Charlie, hoping that he’ll win one of Wonka’s golden tickets. He even gets a chocolate bar for Charlie to see if they can win a ticket. Soon Charlie does win one ticket and Grandpa Joe gets to go with him.

Grandpa Joe is equally in awe of the wonders of Willy Wonka’s chocolate factory when he and Charlie go there. The two do get into a little bit of trouble when they have a try of some fizzy-lifting drinks that floats them in the air to the ceiling. They get back down but will the two get away with it?

The rest of the cast includes Michael Bollner as Augustus Gloop with his mum Ursula Reit as Mrs. Gloop. Augustus Gloop is a greedy boy who loves to eat anything including chocolate. His greedy habits become the better of him as he falls into Willy Wonka’s chocolate river in the chocolate room.

There’s Julie Dawn Cole as Veruca Salt with her dad Roy Kinnear as Henry Salt. I’m pretty sure that Julie Dawn Cole is a nice person in real life, since Veruca Salt is an absolutely spoilt brat who’s mean, grumpy and very nasty. It’s no wonder she went down that gold egg garbage chute to the furnace. 😀

There’s Denise Nickerson as Violet Beauregarde with her dad Leonard Stone as Sam Beauregarde. Violet loves to chew chewing gum all the time and never stops. She can be pretty mean and nasty too. She has her just deserts as she tries out one of Wonka’s chewing guns and becomes a blueberry.

And there’s Paris Themmen as Mike Teevee with his mom Dodo Denney as Mrs. Teevee. Mike is obsessed with watching TV including watching cowboy films. He’s a brat too! 😀 I enjoyed it when Mike gets shrunk down to the size of an inch as he goes through Mr. Wonka’s Wonkavision machine.

There are also the Oompa Loompas who work at Willy Wonka’s factory. I think the Oompa Loompas are great in this movie, especially when they sing the songs that go like ‘Oompa Loompa Doompety Doo…’ They may not be to Roald Dahl’s tastes, but the songs are pretty catchy to listen to in the film.

In fact, many of the songs are catchy to listen to. I enjoyed it when I heard songs like ‘The Candy Man’; ‘I’ve Got A Golden Ticket’; ‘I Want It Now!’ and ‘Pure Imagination’ being performed. By the way, that rowing song that Gene Wilder sings/recites is mostly from the book and is pretty freaky. 😀

The Blu-ray special features are as follows. There’s a ‘delectable’ making-of documentary called ‘Pure Imagination: The Story of Willy Wonka & The Chocolate Factory’. There’s also a ‘mouth-watering’ commentary with the Wonka kids; four scrumptious sing-along songs and a theatrical trailer. 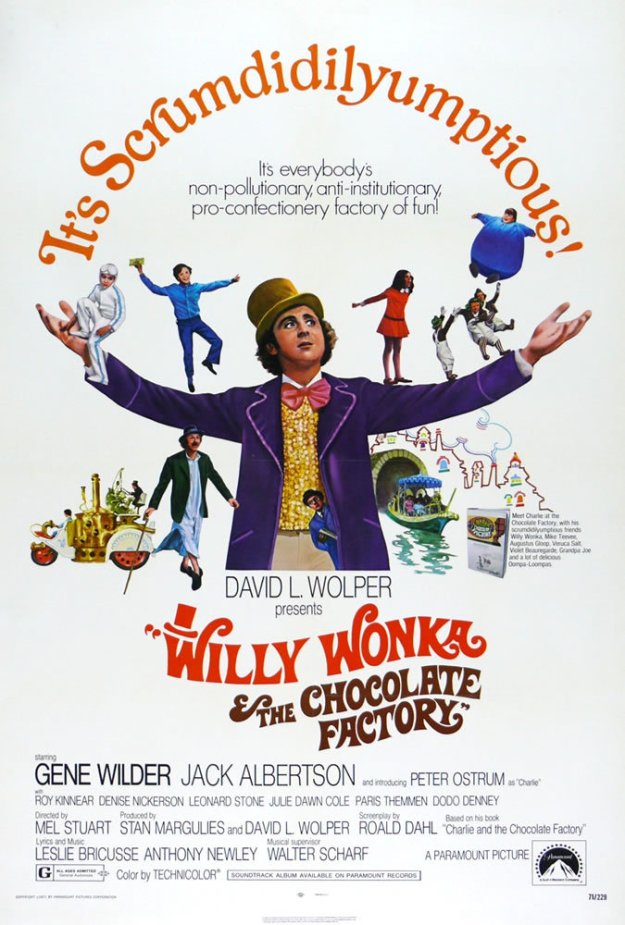 ‘Willy Wonka & The Chocolate Factory’ is a kids’ film I will remember for years to come. It’s one of my favourites and is in my opinion the best film adaptation of the original book by Roald Dahl. It has differences from the book, but with the story, characters, songs and Gene Wilder, it is so wonderful.

By the way, Sarah Sutton who plays Nyssa in ‘Doctor Who’ told me at the ‘York Unleashed’ convention in August 2017 that she prefers the Gene Wilder ‘Willy Wonka’ film! That’s so wonderful! 🙂