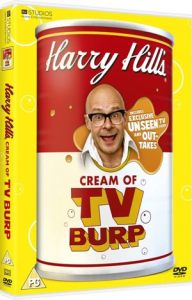 It’s time to talk about the final ‘Harry Hill’s TV Burp’ DVD called ‘Harry Hill’s Cream of TV Burp’! I’ve enjoyed watching these ‘TV Burp’ DVDs recently. Who knows? Maybe I’ll check out ‘The Harry Hill Movie’ next via Google Play. I might save that one for a Christmas viewing than have it in November.

Harry Hill shows us a parody version of ‘Eastenders’ which is essentially ‘Insect Eastenders’, based on BBC Two’s ‘Springwatch: Close Encounters with Simon King’. It’s amazing how they filmed a variety of insects in a model version of the ‘Eastenders’ location, including the Queen Vic and all that here. 🙂

I enjoyed the ‘Fooling Hitler’ segment from ITV1. Since Harry has narrated ‘You’ve Been Framed’, he does a Nazi version of the show on ‘TV Burp’ where Hitler (played by Harry himself) gets played pranks upon by Goering; Himmler and Goebbels. Some of that parody stuff was pretty entertaining!

The ‘Eddie Stobart: Trucks and Trailers’ segment from Channel 5 was enjoyable. Harry takes the mick out of being on the edge of his seat when it seems to be high drama for the truck drivers doing their deliveries. I found it funny when Harry and his Heather of ‘Eastenders’ got into a van of cream cakes!

Those cream cakes should’ve been packed correctly when Harry and Heather invaded the van. 😀 The FIGHT!!! scene in ‘Cream of TV Burp’ involved either someone being nervous or knackered. In the end, the people meaning to fight were too nervous and too knackered to even fight in the show.

That was an amusing and clever way to do that kind of fight and have the show going into a commercial break, Harry. 😀 It was funny when Harry kept saying “No!” to questions about people willing to run their own supermarket in ‘The People’s Supermarket’ on Channel 4. He’s blunt on it. 😀

The second half of the feature includes ‘Rogue Raiders: Baboon Badlands’ on ‘five’ where people have the job of being ‘a baboon monitor’. Harry does his own version of ‘Baboons Behaving Badly’. Not that I’ve seen ‘Men Behaving Badly’, but it’s funny how Harry plays a baboon being ‘domestic’. 🙂

I found the ‘Eastenders’ segment funny where one of the characters Maisie got into a frantic state for some reason. Harry seemed to think it might be down to her mother pouring down booze in the back of her head. Harry sorted it out when Maisie came into ‘TV Burp’ for him to drain the wine out.

I found ‘The Secret Supper Club’ segment funny, especially when Harry had a puppet goose that he played around with behind his desk. 😀 Harry was also resisting a phone call to join the Secret Supper Club until the guy inviting him turns up at ‘TV Burp’ studios itself! It’s so funny when that happens. 🙂

Harry takes a look at the ‘Downton Abbey’ side of things, especially when Hugh Bonneville announces to everyone that Britain is at war with Germany. Harry has to ruin things when he tells everyone “Yeah but don’t worry everyone, we win!” I don’t believe time travel works in ‘TV Burp’. 😀

I also don’t think the cameos of those two guys (including one from ‘Emmerdale’) helped matters. I enjoyed the ‘Eastenders’ segment where a dodgy man who keeps looking at you sternly with a bunch of flowers in his arm was funny. I’m not sure if that was really Harry Hill’s daughter at the end.

‘Harry Hill’s Cream of TV Burp’ isn’t what I would call the best of the five ‘TV Burp’ DVD releases made so far, but it’s still very entertaining. I’m glad I’ve had a chance to revisit these ‘TV Burp’ DVDs again recently. I still miss watching ‘TV Burp’ on Saturdays’. Hope to see ‘The Harry Hill Movie’ soon!