Vampires (Again!!!) with the Fifth Doctor, Nyssa and Tegan 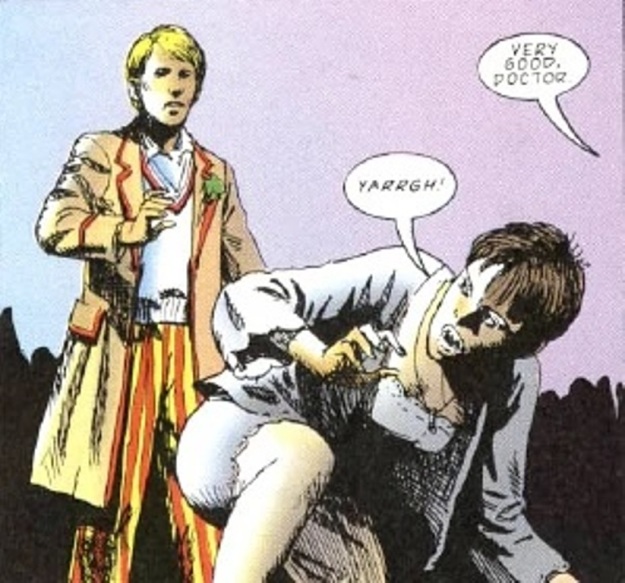 This is an unusual comic adventure! ‘Blood Invocation’ by Paul Cornell and drawn by John Ridgway, was published in the ‘Doctor Who Yearbook’ of 1995 and it features the Fifth Doctor, Nyssa and Tegan. Now this is where it gets rather confusing since our TARDIS trio fight against…vampires! Huh?

Paul Cornell previously wrote a Fifth Doctor, Nyssa and Tegan novel with vampires in it called ‘Goth Opera’. I love that book! Yet it’s so bizarre that he happens to write a comic tale featuring vampires in it with that same TARDIS team. Whether it’s by accident or a coincidence, I’m not really sure here.

This is down to ‘Blood Invocation’ being eight pages long as opposed to a novel which is longer. There are also things repeated in ‘Blood Invocation’ that were in ‘Goth Opera’, including Gallifrey, Rassilon being a Great Vampire and a satanic cult rising a vampire up from the grave at the very end.

I like the artwork for Nyssa in her ‘Snakedance’ outfit though. John Ridgeway manages to capture Sarah Sutton’s likeness in comic form superbly. ‘Blood Invocation’ isn’t a bad story as I make it out to be. It’s decent enough, but I found ‘Goth Opera’ a more effective vampire tale with the Fifth Doctor.