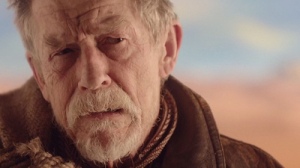 I’m saddened to hear the news today that the actor, Sir John Hurt, has passed away. For me, Sir John played the War Doctor in the 50th anniversary TV special of ‘Doctor Who’ called ‘The Day of the Doctor’. He was also a big Hollywood movie star appearing in the ‘Harry Potter’ and ‘Hellboy’ film series.

I’m so pleased Sir John has appeared in more ‘Doctor Who’ stories as the War Doctor beyond ‘The Day of the Doctor’. With Big Finish, John Hurt has starred in four lavish box sets of audio adventures in ‘The War Doctor’ range. The fourth box set, ‘Casualties of War’, will be released in February 2017.

I enjoyed seeing John Hurt as the War Doctor in ‘The Day of the Doctor’. I was surprised that he was playing an incarnation of the Doctor who fought in the Time War between the Eighth and Ninth Doctors. But he became popular overnight and his legacy has stayed forever with ‘Doctor Who’ fans.

Here is a news article on BBC News covering the announcement of John Hurt’s death – http://www.bbc.co.uk/news/uk-38778145. I was impressed that Sir John has appeared in 200 films. As well as ‘Doctor Who’, ‘Harry Potter’ and ‘Hellboy’, he was in ‘I, Claudius’ and ‘The Elephant Man’.

I’m so saddened to hear that Sir John Hurt has passed away. It’s sad to know that there won’t be any more War Doctor stories in ‘Doctor Who’ with John Hurt to play him. But I’m pleased he has made his mark as the War Doctor both in TV and audio. He will be fondly remembered as a big movie star!

My prayers and thoughts go to Sir John’s family; friends and all who knew him.