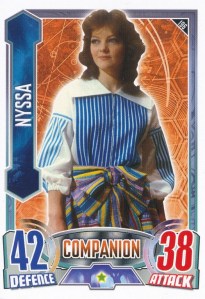 This is a lovely Nyssa trading card!

I rarely get a chance to review any ‘Doctor Who’ merchandise, but for me this is a very special item. Nyssa is my favourite ‘Doctor Who’ companion, as I’m sure you know by now. I love Sarah Sutton who plays Nyssa, as she gives lovely performances with her character in those TV and audio stories.

In my opinion, Nyssa is the best companion of ‘Doctor Who’ from the Fifth Doctor/Peter Davison era. It’s pretty clear though that Nyssa is this pretty underrated companion. She often gets overlooked by the majority of ‘Doctor Who’ fandom with companions like Sarah Jane, Rose, Donna, Amy and Clara.

I recall Sarah Sutton saying on the ‘Four to Doomsday’ DVD commentary that she wished for her own trading card. How lucky I was to find this rare item on Amazon.co.uk that is a collector’s item for definite Nyssa and ‘Doctor Who’ fans in general. This trading card is part of an ‘Alien Attax’ series by Topps in 2013.

The ‘Alien Attax’ card series was to celebrate the 50th anniversary of ‘Doctor Who’. Nyssa’s trading card is #196 and was part of the ‘Companions’ card collection. Being a Nyssa/Sarah Sutton fan and that I love collecting any memorabilia and photos of her, I couldn’t resist purchasing this lovely card.

It’s a really nice collector’s item and one that I treasure keeping in my scrapbook of Nyssa items over the years from conventions and photos purchased for me over Christmas from Amazon or eBay. The card is good, as there is a picture of Sarah as Nyssa in her blue and white stripy ‘Snakedance’ outfit.

It’s a very complimentary picture of Nyssa who looks nice in her ‘Snakedance’ outfit, despite it being the least favourite costume of the fans. Nyssa’s name is placed well in a blue box on a vertical angle. According to the card, Nyssa has a ‘defence’ of 42 and an ‘attack’ of 38, which was…intriguing to see.

Now I don’t know much about statistics and how to use trading cards in this game, but those statistics for Nyssa in ‘defence’ and ‘attack’ seem about right for her character. When I received the Nyssa trading card in the post, it came with two non-related ‘Top Gear’ trading cards in a slim casing.

Now I didn’t want these ‘Top Gear’ cards, but the supplier who sent the item must have put them in order to protect the Nyssa trading card from being damaged or scratched. It was very good of the supper to do that, especially as the Nyssa card looks perfect in every detail when it came in the post.

So if you’re a Nyssa fan like me, you should add this trading card to your collection of ‘Doctor Who’ memorabilia. It features a complimentary picture of Nyssa in her ‘Snakedance’ costume and it is a worthy purchase that I’m pleased to receive from Amazon during the 50th anniversary of ‘Doctor Who’.

I need to show this Nyssa trading card to Sarah Sutton next time I see her at a convention!