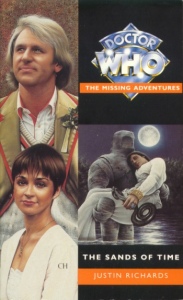 ‘THE SANDS OF TIME’

Egyptain Adventure with the Fifth Doctor and Tegan rescuing Nyssa

‘The Sands of Time’ was the second book that I read in a trilogy of Fifth Doctor novels over my summer holiday in Scotland, August 2014. Like ‘Cold Fusion’, I purchased this book from Amazon but I hadn’t had the chance to read it at the time. Now I can finally say that I’ve read ‘The Sands of Time’!

The book has now been reprinted with a brand new edition for ‘The Monsters Collection’ of ‘Doctor Who’ BBC Books in 2014. It has a new introduction by Justin Richards. I purchased the original novel of this story before the release of the 2014 reprint. Fans can now enjoy the latest edition of this novel.

This book is a sequel to the classic ‘Doctor Who’ TV story called ‘Pyramids of Mars’ with Tom Baker’s Doctor and Sarah Jane Smith. There’s no Suketh in this I’m afraid, as the villainess happens to be the goddess Nephthys. But there are the robot mummies from that story in this that work for Nephthys.

I enjoyed reading this novel very much. It is an intriguing story and it kept me interested all the way through. But I have to say I was deprived of there being little of Nyssa featured in this story since she is my favourite ‘Doctor Who’ companion. I expected more of Nyssa to be featured during the novel.

‘The Sands of Time’ was originally one of ‘The Missing Adventures’ novels published by Virgin Publishing in the ‘Doctor Who’ range of books. This adventure is by Justin Richards, who would become the commissioning editor of the BBC range of ‘Doctor Who’ books from the late 1990s up to the present.

This book contains 16 chapters with short prologues at the beginning of each chapter. This is likely to be a possible four-part story, if you divide the 16 chapters into four and if Big Finish were to adapt this story into an audio drama. The prologues are likely to form preludes should Big Finish adapt this.

The adventure is set between the TV stories ‘Arc of Infinity’ and ‘Snakedance’; and presumably after ‘Fear of the Dark’, one the BBC Past Doctor Adventure novels with the Fifth Doctor. This story is set before the events of ‘Pyramids of Mars’ and it is a sort of sequel to ‘Black Orchid’ (more on this later).

This is a well-researched story with lots of historical connections to the Egyptian legends. It does have the feel of a gothic horror story in a Fifth Doctor novel. There is a lot of jumping between time zones that got me befuddled, but I was able to keep track reading within the main body of the story.

I liked how the Fifth Doctor is portrayed in this story, as he displays intelligence and curiosity. He also has a concern for Nyssa and is determined to save her life. The Doctor spends more time with Tegan and he fits well in the Victorian society. He plans ahead to solve the mystery of Nyssa’s mummifying.

In this story, Tegan gets to be ‘the companion’ with Nyssa’s out of the picture. She gets to be a more active character compared to the TV series. I liked the comparisons made between her and the Doctor by Atkins. Tegan is worried and misses Nyssa, as it’s so clear that she is her best mate in this.

Nyssa doesn’t feature much as she gets kidnapped. This does feel like ‘Kinda’ where Nyssa is absent for the story. She gets mummified and is chosen as the host for Nephthys’ body. I liked Nyssa’s scenes with Sitamum; the handmaiden. I wished Nyssa wasn’t side-lined, although the focus is mostly on her.

Lady Ann Cranleigh nee Talbot, Nyssa’s double, makes an appearance in this. I was so pleased that Ann was in this, since ‘Black Orchid’ is my favourite ‘Doctor Who’ story. There’s a twist involving Ann and Nyssa, but I won’t reveal it to spoil it. I did like the Cranleigh Hall party scene in 1926 at the start.

The story also features Atkins, Lord Kenilworth’s butler. Atkins is a worthy ally to the Doctor and Tegan and he gets to go with them on an adventure to rescue Nyssa. Atkins is a very interesting character in the story and he’s almost a bit like Jeeves in a way from those P.G. Wodehouse stories.

There’s also a shifty character called Sadam Russell, who is a religious Egyptian fanatic. Sadam is a man who has some very mysterious motives and he’s determined to serve the goddess no matter what. He’s also the one who kidnapped Nyssa and takes her off to Ancient Egypt to get mummified.

There’s also a character called Vanessa, who is the daughter of Aubrey Prior. Vanessa seems like a giddily happy girl at first, engaged to her fiancée; James Norris. But Vanessa isn’t what she seems. She becomes strange; wears a dangerous ring; steals a cobra and is carried away by robot mummies.

There are lots of links to ‘Pyramids of Mars’ running throughout this story. It surprised me that Justin Richards didn’t do another story with Suketh. There’s lots of history lessons of Orisians; Suketh and Nephthys featured in the prologues. There’s also a brief cameo of Professor Marcus Scarman in this.

The robot mummies are very effective, being used as the tools for Nephthys and Sadam. The organ music being played creates the effect of the mummies’ lumbering about. I can easily imagine scenes when one of the mummies carries Vanessa away and when the mummies crush someone to death.

The people who get converted into lifeless servants for Nephthys reminded me of certain things from ‘Pyramids of Mars’. The scenes where Nicholas Simons is brought back to life after getting killed and he soon kills Margaret reminded me of Professor Scarman killing his brother from that TV story.

The story’s conclusion took me quite by surprise. Like I said before, I don’t want to reveal any spoilers. But there is a twist on how Nephthys; Sadam Russell and the mummies get defeated. I’ll let you find out what happens as it’s all down to the Doctor’s clever cunning and someone helping out.

I wouldn’t mind Big Finish adapting this story into an audio drama. It would be great with Peter, Janet and Sarah leading the cast. Although Nyssa wouldn’t appear much, Sarah would get to play two parts again in Nyssa and Lady Ann. I imagine Barnaby Edwards would be a great director for this.

Mind you, with the latest 2014 reprint release of the book, it is likely that ‘The Sands of Time’ will get its own BBC audiobook release. It would be nice to hear the audiobook read in the background. Who would read it though, I wonder. Perhaps Peter Davison, Janet Fielding or Sarah Sutton could read it?

So ‘The Sands of Time’ is a very enjoyable sequel to ‘Pyramids of Mars’. I found it disappointing though that Nyssa wasn’t in this story much. But if you’re a fan of ‘Pyramids of Mars’ and of ‘Doctor Who’ in general, then I’m sure you’ll enjoy this book and have no problems with reading it, since I enjoyed it.