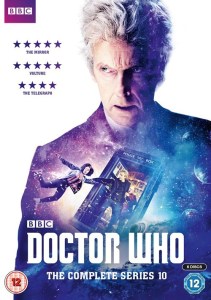 ‘THE LIE OF THE LAND’

When I first saw ‘The Lie of the Land’ by Toby Whithouse on TV, I wanted to salvage something from watching ‘The Monks Trilogy’. So far, I’d found it a pretty muddled trilogy of ‘Doctor Who’ episodes.

And do you know what? Thank goodness I saw ‘The Lie of the Land’, because I really enjoyed it on TV. I found it to be a decent and fitting end to ‘The Monks Trilogy’ in Series 10 of ‘Doctor Who’ itself.

Toby Whithouse has written for ‘Doctor Who’ before. ‘School Reunion’, ‘The Vampires of Venice’, ‘The God Complex’, ‘A Town Called Mercy’ and ‘Under the Lake’/’Before the Flood’ are his episodes. 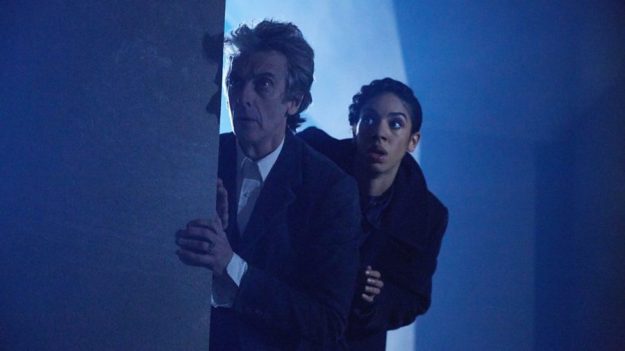 I was very impressed with the writing of this episode since I felt pretty engaged with the Doctor, Bill and Nardole as characters. Mind you, having watched this again, I have been able to spot plot-holes.

It’s ironic to look back on this trilogy of ‘Doctor Who’ episodes that have for the most part been pretty muddled. It’s also ironic that whilst I enjoyed this episode, many people seem to rate it very poorly.

I’ve read on Wikipedia that critics say ‘The Lie of the Land’ is the weakest episode of Series 10. That made me curious since somehow I can’t see that, as I really enjoyed the episode upon my first watch.

Mind you, the fact that I struggled to watch ‘Extremis’ and ‘The Pyramid at the End of the World’ doesn’t help matters. I suppose not everybody’s expectations to the climax of this trilogy were met.

Anyway, the story takes place in a dystopian reality on Earth where the evil zombie-like Monks have taken over the world, following the events of ‘The Pyramid at the End of the World’. It seems bleak.

The Monks have been ruling the Earth for six months, but everyone is made to think that they’ve always been there. The Monks create their own version of Earth history and that happens to be a lie.

Despite that, there is one person on Earth who knows that the Monk’s reality of Earth isn’t correct. That person is of course Pearl Mackie as Bill Potts. Bill tries to keep holding to the memories she had.

She keeps on to remembering her travels with the Doctor and Nardole and having adventures before the Monks ruled the Earth. Bill is soon reunited with Matt Lucas as Nardole when he visits her house.

Very soon, Bill and Nardole work together as a team when they search for the Doctor. I do like how the episode focuses on the two looking for the Doctor and interacting as friends helping each other. 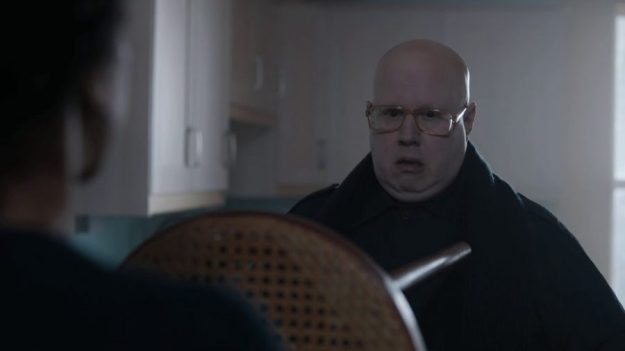 It seems the Doctor has been working with the Monks in their broadcasts of fake news to tell everyone in the world about the good deeds they did in Earth’s history. I will get into this more later.

Anyway, Bill and Nardole soon locate the Doctor on board a prison boat off the coast of Scotland. They manage to get on board the boat so they can rescue the Doctor. But the Doctor betrays them.

I found it pretty shocking when the Doctor seemed to betray Bill and Nardole in that moment once he summons the guards and phones the Monks. It seems the Doctor’s really joined the Monks.

But it was even more shocking when Bill actually grabs one of the guards’ guns and points it at the Doctor, ready to fire. She eventually shoots the Doctor with that gun after he has just betrayed her.

I did think that the Doctor was going to regenerate at that point. I know I should’ve suspected it was a teaser and Peter Capaldi wouldn’t leave immediately then. But it was all very tense then, wasn’t it?

Thankfully it turns out it was all a trick by the Doctor and that he wasn’t really working for the Monks at all. He was testing Bill to make sure she was not controlled by them. Phew, that was a huge relief!

Okay, first of all from that YouTube clip, I found it really funny when Dave apparently forgot to exchange his ammo for blanks. I laughed at that when I first it on TV. It was pretty hilarious to watch.

I was very impressed with the performances of the cast in this episode. Peter Capaldi and Pearl Mackie stood out for me as the Doctor and Bill and Matt Lucas as Nardole had been growing on me.

I found how well done the episode had enhanced Bill’s character in her journey to save the Doctor. It was also so intriguing to see her connections to her mum when she imagined talking to her at times.

Mind you, one thing puzzles me about this episode on a second watch. How exactly did the Doctor get enlisted to broadcast fake news to the world about the Monks’ ‘good deeds’? And why agree to it?

Was the Doctor threatened by the Monks? Was he manipulated? Did he offer his services to the Monks to broadcast fake news in exchange for his life? How was he imprisoned on that prison boat?

More to the point, how did the Doctor manage to get off the prison boat when he and Bill returned to St. Luke’s University to get to Missy in the vault? Weren’t the Monks always watching the Doctor? 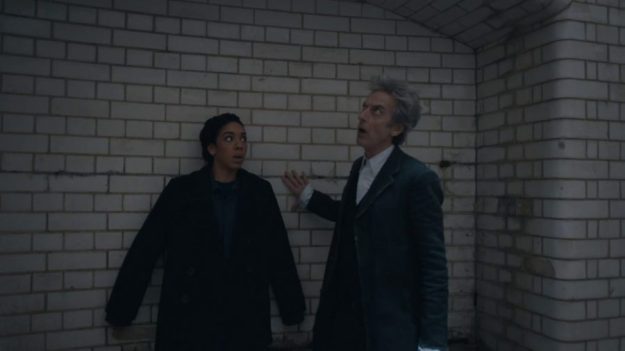 There are so many unanswered questions about the Doctor’s partnership with the Monks in this fake news broadcast situation. I’d certainly like those questions answered! But do not worry; everyone…

Okay, there is a deleted scene that features the Doctor, Bill, Nardole and party hiding from a Monk when it looks for them on the prison boat. It’s just a pity they couldn’t put it into the actual episode.

This episode also features another guest appearance of Michelle Gomez as Missy in the series. Missy has been locked inside the Doctor’s vault for all this time since Series 10 began. I knew this of course. 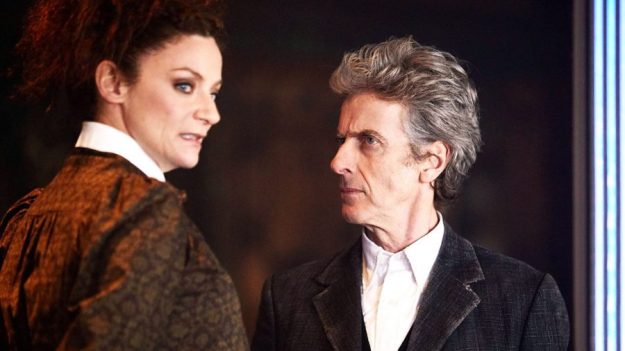 The events of Missy’s imprisonment inside the vault were documented in ‘Extremis’. Still not sure why the Doctor decided to guard Missy in the vault anyway and what prompt it was that made him to do it.

Anyway in the episode, Missy gets to have a role in helping the Doctor to solve the problem on how to defeat the Monks. This is while she’s trapped in her force-field in the vault as he talks to her.

It’s interesting to note that Missy has encountered the Monks before. Whether that was in her current incarnation or when she was previously the Master years ago, it’s not really explained here. 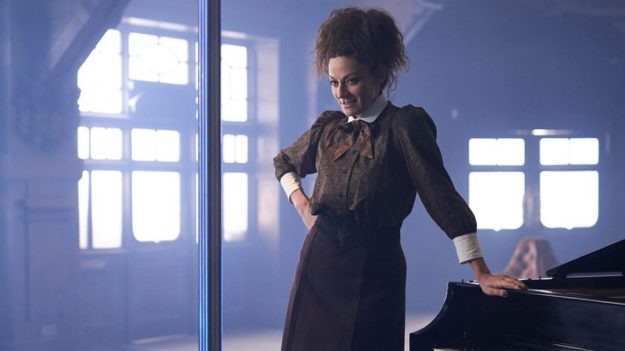 It soon transpires that Bill is the lynchpin to this whole business of the Monks’ ruling the Earth. This is due to her asking the Monks for help in the previous tale with getting the Doctor’s eye-sight back.

So in order to defeat the Monks, the Doctor and group have to stop the newsfeed of fake news broadcasting to the world. This is done by the Monk statues acting as transmitters all over the world.

The Doctor and group also have to go to the Monks’ pyramid, which is now in the centre of London. However the cost to defeating the Monks is ending Bill’s life when in contact with the Monk controller.

I liked how the Doctor won’t allow the sacrifice of Bill’s life to save humanity as he takes it upon himself to let the Monks drain his mind in stopping the broadcast of fake news. It is very noble of him!

But of course it’s not enough and very soon Bill makes the sacrifice to have the Monks drain her mind instead of the Doctor’s. It seems hopeless by this point, but thankfully Bill gets out of this one.

In defeating the Monks, Bill uses the one pure, uncorrupted, irresistible image of her mother to give the people of Earth that chance for freedom. That somehow manages to stop the Monks’ influence.

In the end, the Monks make a hasty exit from Earth as they journey in their pyramid spaceship, wiping people’s memories of them. How they managed to do that so quickly is not explained either.

I have heard it argued that the Doctor was sidelined for the companion in this episode. But to be honest with you, I’m actually glad that Bill got a stronger character role in this episode which is good.

By that point, I felt that Bill had started to dwindle a bit in the previous instalments of ‘The Monks Trilogy’. I liked that she took the Doctor’s place in order to self-sacrifice herself during that moment.

It added to the tension when it seemed like she was going to die. Yeah I know it’s a bit of a leap of faith when Bill thinks of her mother in order to fight back against the Monks, but it did work for me.

At the time of watching this episode on TV back in 2017, I really enjoyed ‘The Lie of the Land’. I know it’s got some plot-holes that are easy to spot nowadays. But I can’t help feel good about the episode.

I was able to follow the story and appreciate the performances of the cast. I wish I my enjoyment of ‘The Monks Trilogy’ could’ve been appreciated in the previous two episodes as I found them a muddle.

Regarding other opinions, I can see why the climax of this episode and ‘The Monks Trilogy’ altogether didn’t live up to people’s expectations. But to honest with you, I don’t mind that so much.

My problem with ‘The Monks Trilogy’ overall is that it’s all over the place. As I stated before, it’s not all by one writer. This is by three writers who had to work together to make this trilogy come about.

If it was just Steven Moffat writing this trilogy, I would’ve accepted this as a three-parter and it would’ve been ‘consistent’. Instead these three episodes are considered standalone, separate tales. 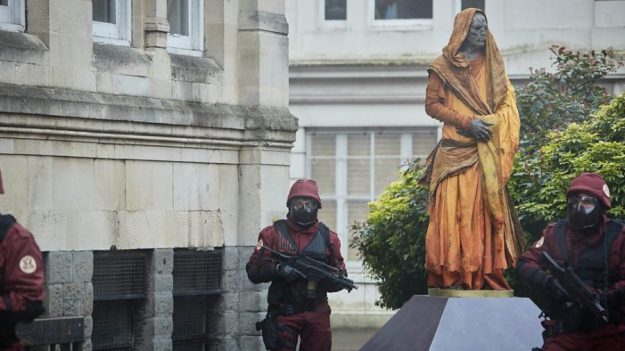 Yes they’re all linked by the Monk theme, but the arc itself is frustratingly muddled in places. As I said in a previous review, I would have liked ‘The Monks Trilogy’ in the style of ‘The E-Space Trilogy’.

The Doctor, Bill and Nardole could’ve visited three different worlds on a special quest or be trapped in a separate universe. If they had to do ‘The Monks Trilogy’, it’d be superb to not set it all on Earth.

Have it set on different planets where the Monks are invading and taking over whilst the Doctor, Bill and Nardole have to stop their endeavours, finding it a challenge to do so in each tale. It could work.

The DVD special features on this episode are as follows. On Disc 1 of ‘Series 10 – Part 2’ of ‘Doctor Who’, there’s ‘The Lie of the Land’ – Inside Look’ featurette.

On Disc 4 of ‘The Complete Series 10’ of ‘Doctor Who’, ‘The Lie of the Land’ – Inside Look’ featurette can also be found on there. On Disc 6, there’s the ‘Doctor Who: The Fan Show – The Aftershow’ edition for this episode.