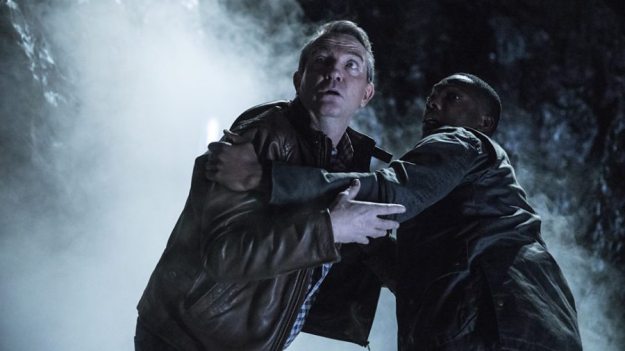 It’s the penultimate episode of Series 11 of ‘Doctor Who’! I’m sad this season is coming to an end! I’ve enjoyed Series 11 this year! This ‘Doctor Who’ season has been pretty good so far and I’ve enjoyed the character journeys of the Doctor, Graham, Ryan and Yaz. I hope it will be good in the season finale!

So what’s the latest ‘Doctor Who’ episode about then? Well, ‘It Takes You Away’ is an episode by Ed Hime, a new writer to the TV series. The story is set in the Norweigan fjords. The Doctor, Graham, Ryan and Yaz come across an isolated house where a scared girl is inside, alone and without her father.

I like how the episode begins with the Doctor, Graham, Ryan and Yaz investigating something and they become curious about it. This is something that’s become a thing wherever the Thirteenth Doctor TARDIS team go in time and space. It’s something I prefer as opposed to what was in the previous era.

Apparently, there’s this monster that comes to steal people away. It scares the blind girl, Eleanor Wallwork as Hanne, who hides underneath the table. I was pleasantly surprised to see a blind person represented in this episode. This put me in mind of blind people in ‘The Moon Stallion’ and ‘Daredevil’.

Very soon, the Doctor and her friends find themselves going through a mirror that doesn’t reflect people’s images all of the time. I did wonder if this episode was actually going to be about vampires and whether Graham and Ryan had turned into vampires. That would’ve been fun and interesting. 😀

Thankfully that’s not the case, as the mirror is actually a portal to a gateway or a corridor of a cave-like structure to another universe that has a consciousness. I found this concept of two universes connected to each other intriguing. Can the Doctor and her friends resist the desires of this universe?!

Now from watching this episode, you’d think this was one of those complicated timey-wimey episodes from the Steven Moffat era. But for the most part, I was able to follow what was going on in the episode without too much trouble. This was down to the strong character drama featured throughout.

Yeah there were things about this episode that I didn’t get initially concerning the intersection between two mirrors; the concept of a conscious universe and how the alien Solitract is supposed to work. But the more I thought about it, the more I found the ideas interesting, plausible and easy to comprehend.

I didn’t feel like anything was silly or being played for laughs in this episode. I was able to take things seriously; finding the concepts and the emotional drama easy to take in. You think for one moment the episode’s going to be something; then it turns into something else and it didn’t seem to disappoint.

I also found it interesting to see a blind girl in this episode through Hanne’s character and how she was depicted, being scared and wanting to see her father again. Hanne seemed to be feisty and reckless, especially when going through the Antizone and when sensing her mother was not real.

I enjoyed it when the Doctor, Graham and Yaz had to gain the assistance of Kevin Eldon as the alien-like Ribbons in order to gain passage through the Antizone. Ribbons seemed greedy for profit and he put me in mind of a Ferengi from ‘Star Trek’. Surprised he didn’t ask for gold press latinum. 😀

It was tense when there were these flesh moths that came out to attack and were attracted to Ribbons’ red glowing lamp light. It was tenser when the Doctor, Graham and Ryan remained still whilst the flesh moths killed Ribbons, before the three ran for their lives away from the flesh moths chasing them.

Jodie Whittaker is wonderful as the Doctor in this episode. I find how increasingly confident she seems to be in the role and I feel she’s managed to find her feet with the character. There were some pretty amusing moments with Jodie’s Doctor. The soil eating moments in the tale were a bit strange, but still.

I enjoyed the intensity in those emotional moments when Jodie’s Doctor tries to explain what’s going on with the Solitract and how she tries to persuade everyone to get out of the Solitract universe in order to return to their home universe. I like how Jodie’s Doctor worked things out during the episode.

I was anxious when the Doctor might lose her own sonic screwdriver to Ribbons when he wanted to buy it from her. The Doctor manages to maintain her cool when negotiating with Ribbons, not letting him have her sonic screwdriver and when she tells Graham and Yaz not to move with the flesh moths about.

Bradley Walsh steals the show as Graham in this episode. This episode features some defining moments in Graham’s character. I did a double-take when it turns out Graham’s been keeping cheese and pickle sandwiches in his pocket whilst travelling should he get hungry. (Pause) Well, obviously! 😀

But the strongest set of defining moments for Graham is when he finds himself reunited with his former dead wife, Grace. Graham finds it a struggle to let go of Grace before he finds out that she isn’t real. The emotional moments with Graham’s character in this episode have been pretty standout here.

Tosin Cole is equally good as Ryan in this episode. Ryan becomes suspicious about Hanne having been abandoned by her father and mistakenly assumes her father doesn’t love her. Despite making that mistake, Ryan is still suspicious and struggles to get on with Hanne when he’s meant to look after her.

Hanne doesn’t take to Ryan much either in the episode, as she knocks him out before going into the Antizone to find her father. Thankfully Ryan catches up with Hanne and the two get on, getting over their differences. I liked that moment when Ryan calls Graham ‘granddad’ at the end of the story.

Mandip Gill is very good as Yaz in the episode. I don’t think this is a standout episode for Yaz’s character here, but she has a fair share of good moments. I liked it when Yaz comes to Hanne’s defence as she rebukes Ryan’s suspicions about her father. She seems more compassionate and sensitive than Ryan is.

I’d like to think Yaz is the person who’s there to explain to the audience what the Doctor’s on about describing the Solitract. Yaz copes well due to her police officer skills, especially when investigating Hanne’s father’s disappearance and in accompanying the Doctor and Graham into the Antizone.

The episode concludes on a particularly strange note. After the Doctor has her friends; Hanne and her father sent out of the Solitract universe back into the Antizone, she finds herself in a white void…with a frog on a chair. (laughs) It seems it’s the Solitract in the form of a frog…with Grace’s voice.

You know something? I’ve reviewed plenty of ‘Doctor Who’ stories on my blog as well as movies and TV shows I like. Many of them have strange oddities within them that I can like and appreciate gradually, even if they don’t make sense initially. And yet…something like this is still pretty darn weird!

But it also feels strangely appropriate for ‘Doctor Who’. I’m surprised Jodie’s Doctor didn’t kiss the frog and turn it into a prince instead of blowing a kiss like she did in the episode. 😀 I wonder if it’s the same frog that Jodie’s Doctor got chased by outside Buckingham Palace in the ‘Rose’ novelization? 😀

Anyway, Jodie’s Doctor gets back into our universe and returns with her friends. All is well, as the Doctor, Ryan, Yaz and Graham say goodbye to Hanne and her father before they return to the TARDIS. I liked the misty, spooky atmosphere featured in the Norway setting, which suits the episode very well.

‘It Takes You Away’ has been a terrific ‘Doctor Who’ episode to watch. It’s an episode you need to watch more than once, but I enjoyed what happened to the Doctor, Graham, Ryan and Yaz in the trap they seemed to have got themselves into. All was satisfying and entertainingly resolved for me.

Like I said, I’m saddened about Series 11 coming to an end. I’ve enjoyed this season so far. I wonder what’s going to happen next in the season finale. How will Jodie Whittaker’s first season of ‘Doctor Who’ come to an end? Will it end on a satisfying note? Will our four main TARDIS characters survive?!

Next week’s episode is called ‘The Battle of Ranskoor Av Kolos’ by Chris Chibnall.