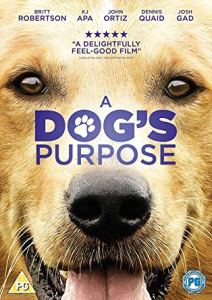 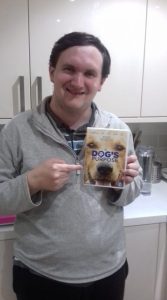 (confused; gobsmacked) Is this real? Is this film really real? I mean…

Deadpool: “JUST REVIEW IT, YOU MORON!!!”

Released in 2017 at the cinemas, ‘A Dog’s Purpose’ is a comedy-drama film based on the 2010 novel by W. Bruce Cameron. I did see trailers of this film at the cinema, but I wasn’t really keen on it. It was bound to be one of those average dog films that doggie lovers would love to see every year at cinemas.

Not that there’s anything wrong with that. I’ve seen ‘Patrick’ at the cinema and thoroughly enjoyed it in much the same way I enjoyed ‘Pudsey the Dog: The Movie’ on DVD. But very often, dog films can very predictable in telling the same story about dogs being loyal pets to their masters in average tales.

But the issue I have with ‘A Dog’s Purpose’ is how…very bizarre it is. Like I said, this movie is based on a book and there’s a sequel to it called ‘A Dog’s Journey’, also based on a book. I don’t know much about the author W. Bruce Cameron, but I got a sense there were some Buddhist elements to the tale.

With that said, it was fun to see through the dog’s insight how he experienced life and how it’s interpreted for us as the audience to understand. Josh Gad does the voice for the dog in all incarnations, especially when becoming a female dog 😀 , throughout the movie. He was funny to hear.

The dog’s main incarnation of focus in the film is when he’s a Red Retriever who gets the name Bailey by his owner Ethan. The emotional connection is evident between Bailey and his owner. We get to see Bailey live his life with owner Ethan who grows up from a young boy to become KJ Apa as the teenager.

It was sad when Bailey died as an old dog before becoming reincarnated into the female police dog Ellie. I admit the whole reincarnation thing was off-putting for me as I watched the film. But it was so intriguing to see and I did like how the dog as Buddy reunited with Dennis Quaid as the older Ethan. 🙂

The film was directed by Lasse Hallström. It also features Britt Robertson as Hannah, Ethan’s love interest during their teen years; Juliet Rylance as Elizabeth, Ethan’s mother; John Ortiz as Carlos, Ellie’s owner; Kirby Howell-Baptiste as Maya, Tino’s owner and Peggy Lipton (in her final film role before her death in 2019) as the older Hannah who is reunited with Dennis Quaid as older Ethan after many years.

It was interesting how the years pass for the dog during his/her reincarnations. We start from being in the 1950s through the 1960s into the late 1970s/early 1980s into the mid 1980s before finishing in the mid-to-late 2000s. It’s fascinating a dog’s lifespan can be reincarnated like this for over many years.

So…yeah ‘A Dog’s Purpose’ was a rather unusual film for me especially with a dog in it. It’s fascinating in how it tells the story of a devoted dog who looks for his/her rightful purpose and wanting to fulfil it. I’m not sure I understand it fully and I don’t know if others will too. But it was very intriguing to see.